22 years. I moved here after finishing my MFA at the University of Georgia in Athens, GA. Venice was the place I landed because I love the carnival underbelly, mixed with a strong sense of community. Venice has always had the edge that is so great for artists of all stripes.

Tell us about your art or company, what makes it awesome?

I’m a solo performer. I write and perform solo plays, loosely based on characters from my childhood growing up in South Georgia. I’ve found that doing solo shows is the best way to express myself artistically. It’s not something that I thought I would be doing when I first moved to LA, it’s not what I planned to do, but once I started it proved to be fulfilling. What also makes it great is that I get to travel around the United States with my wife Deb Goodfader Loucks, who does everything except get on stage (all of the technical and production stuff).  It’s evolved for us over the the last 10 years, so now not only do we get to tell our stories, but we get to stay a while and experience the culture of the places we visit.

I would describe my style as old-school Southern storytelling with a modern twist. I think that my background in doing both straight plays and musical theater for twenty years helps me create an entertaining experience. It’s evolved into having a lively conversation with the audience.

What’s impacted me the most were the times that I was sitting in the middle of my living room growing up in South Georgia and listening to my uncles tell stories about their lives. As I got older, I realized that I like to to do the same thing. I just moved from the living room to the stage, and threw in some music. Of course I would have to add that I never knew sitting in a church pew and listening to my Hellfire and Brimstone Southern Baptist preacher father would have so much influence on what I do as a performer. I would hope that he would say that I preach six inches up on my britches leg. 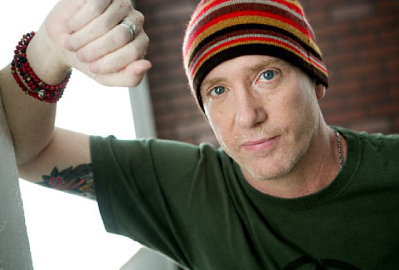 I’m right now in the process of doing my third solo show called Booger Red, and we’re opening Saturday April 20th at the Electric Lodge in Venice. It’ll be running for 2 weekends. It’s about finding your voice and looking at the decisions you make along the way to get you where you’re at. The story is loosely based on my father’s journey in becoming a preacher, and my life in becoming a storyteller.

What is your favorite affirmation, mantra, or quote:

“Confront the dark parts of yourself, and work to banish them with illumination and forgiveness. Your willingness to wrestle with your demons will cause your angels to sing.” August Wilson

What Venice places would you take a visiting artist friend?

If somebody is visiting Venice, my favorite thing to do is to walk down Washington and get on the boardwalk and walk down the strip in the middle of a busy beach day. It really captures the energy of Venice. Maybe stop by Small World Books, then over to the Sidewalk Cafe, grab a beer and do some people watching.

How does one find you?