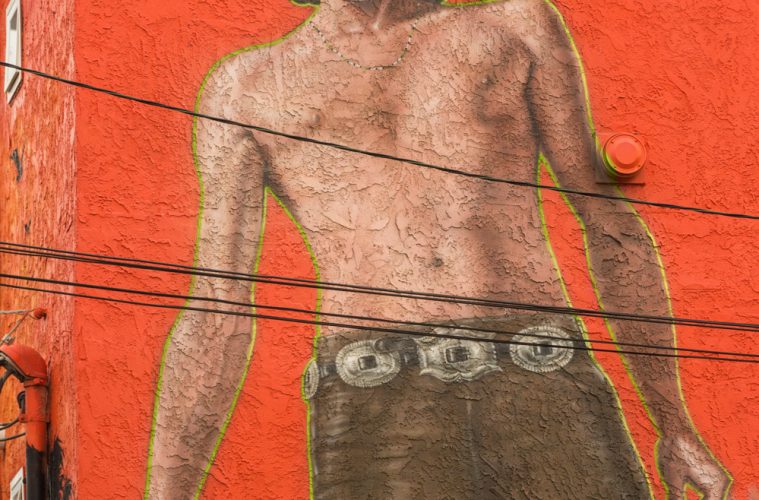 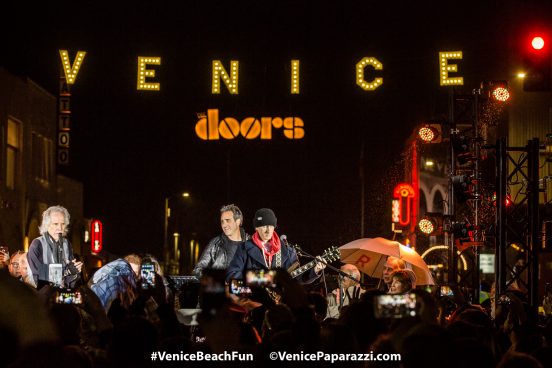 The 50th anniversary of The Doors‘ .debut album was celebrated in grand style underneath the Venice Sign!  Jan. 4th was officially declared “Doors Day,” by the City of Los Angeles, and the party ensued as Doors guitarist Robby Kreiger and drummer John Densmore led the crowd through  a sing a long version the Doors classic,   L.A. Woman.

Throngs of fans came out to the Windward Ave. stage in the light rain to honor the band, and its Venice roots.  Thanks to the Venice Chamber of Commerce for hosting this magical night in Venice!  And thanks to Alberto Bevacqua Studio, Ara Bevacqua and Jon S Grauman for creating the “Doors” sign! Very cool!

View event pics and video by Venice Paparazzi below! 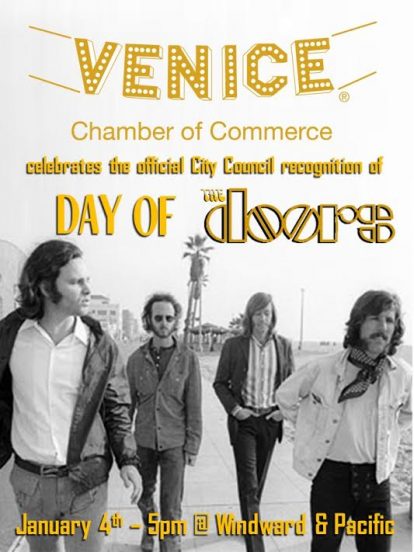 Following from the Venice Chamber.  The Doors (Densmore, Krieger, Manzarek, and Morrison) are quite possibly the most legendary Los Angeles band of all time.  Formed in Venice, The Doors went on to become the definitive sound and voice of the 1960s and influenced countless generations to come with classic songs such as “Light My Fire,” “Break On Through (To The Other Side),” and, of course, “L.A. Woman.” Their story has been the subject of countless books and films, including the infamous 1991 film by Oliver Stone and the acclaimed 2010 documentary When You’re Strange, narrated by Johnny Depp. The Doors are celebrating their 50th Anniversary in 2017, as their eponymous debut album was released on January 4, 1967 and is still considered to be one of the all-time-great rock and roll debuts.

“Our songs sprang up out of the Pacific like beautiful, edible silver fish… and apparently the world took a big bite” said Densmore.  “Venice is a place where many have chased their pleasures or dug their treasures. It is a place that birthed The Doors and taught us all to cherish the funky, weird, and world-renowned vibe that Jim, Ray, Robby, and John helped make famous,” said City Councilmember Bonin. “I am very happy to be amongst the feast of friends that celebrated The Doors’ 50th anniversary, and I thank the band, their management, and the Venice Chamber of Commerce for making this celebration possible.” 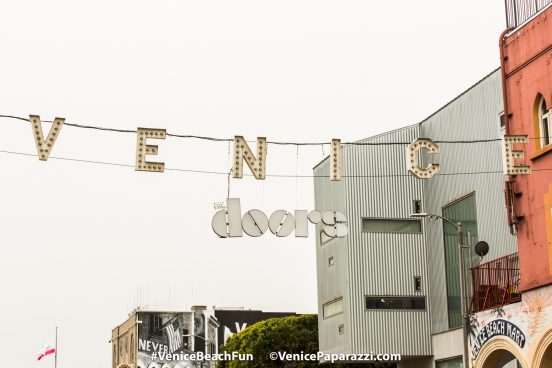 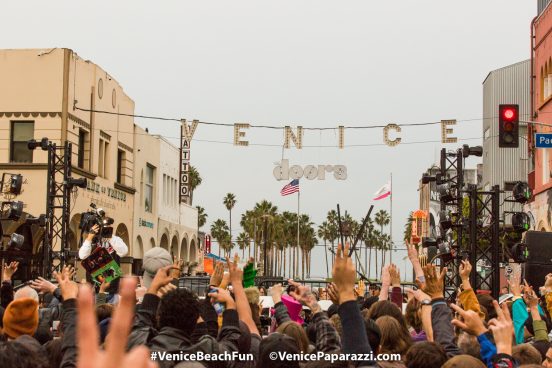 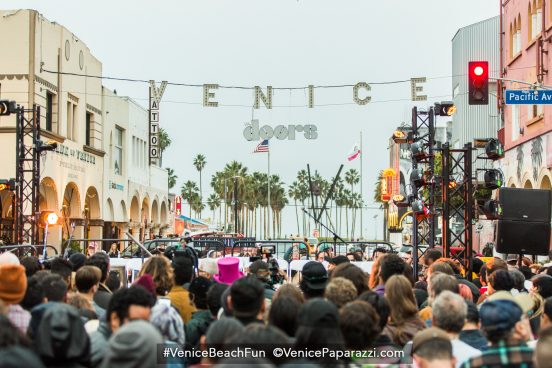 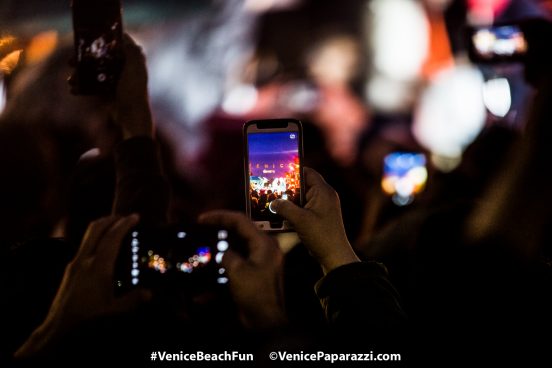 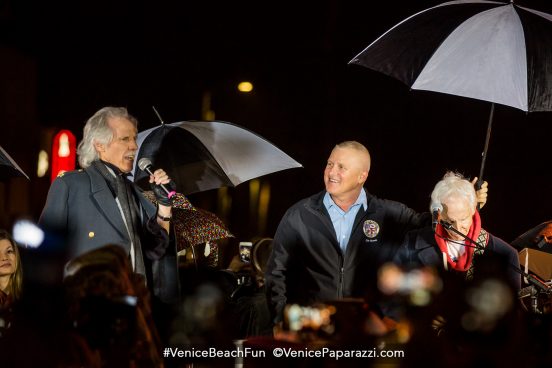 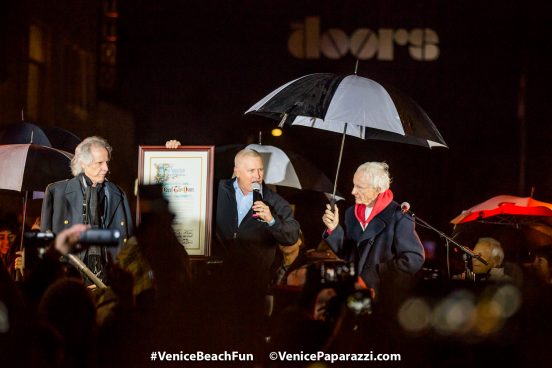 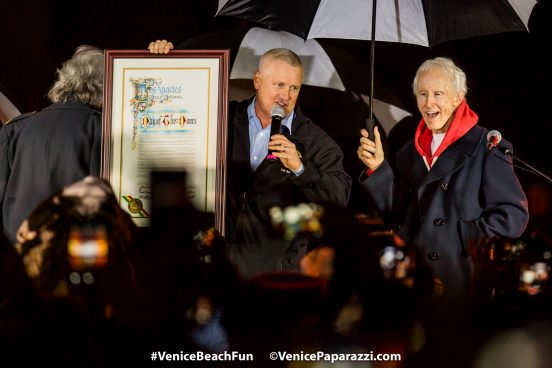 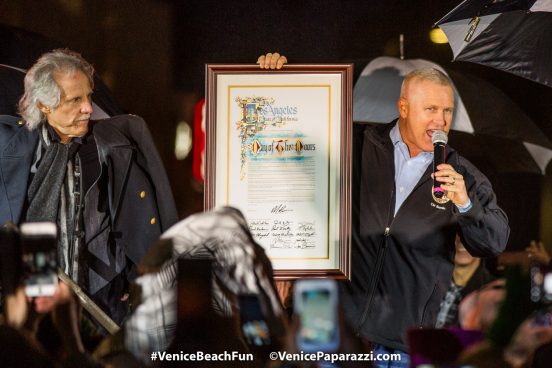 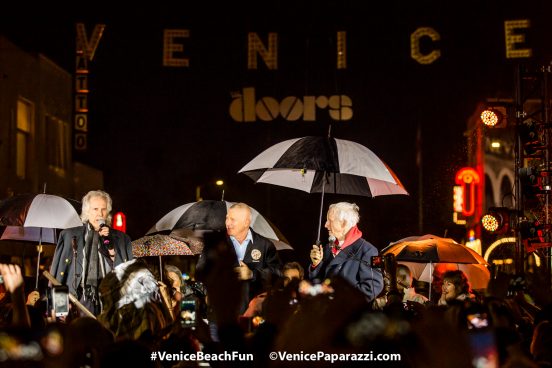 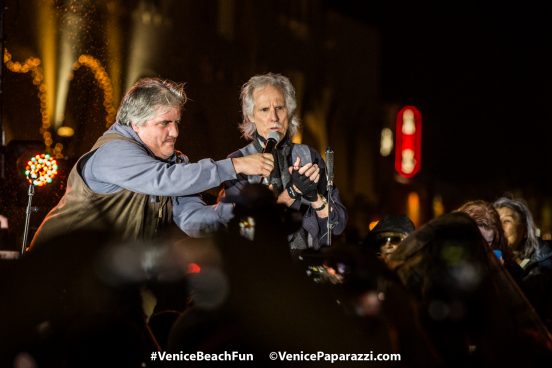 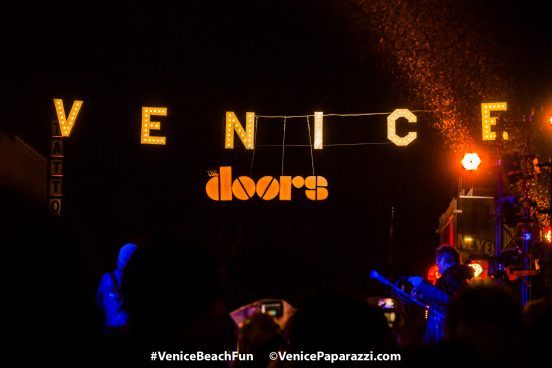 VIEW VIDEO OF LIGHTING AND THE DOORS JAM! 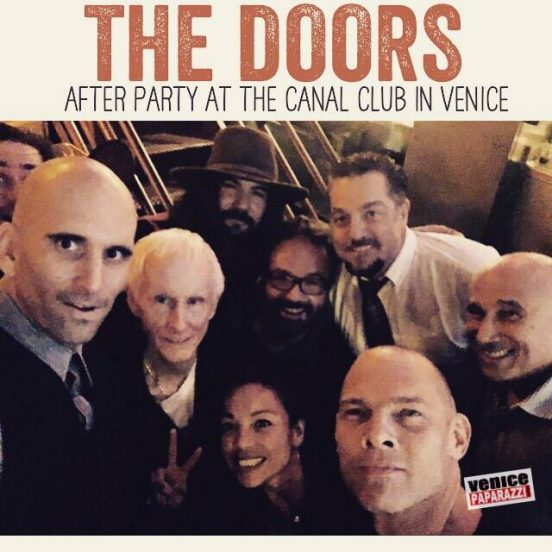 VIEW SLIDESHOW FOR ALL EVENT PICS! 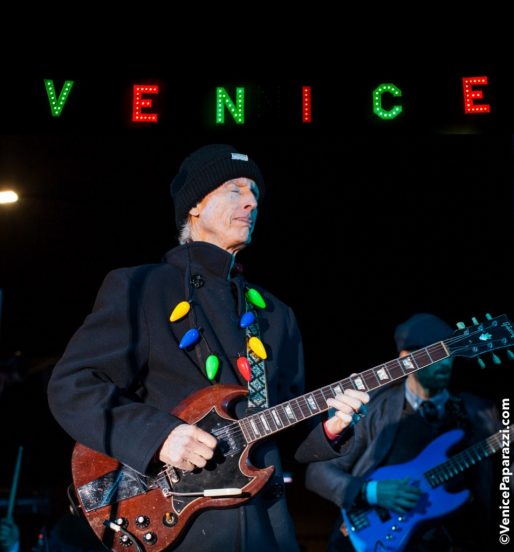 About this photo:  The Doors legend and Rock & Roll Hall of Famer Robby Krieger, lights up Venice at the Venice Sign Holiday lighting on Dec. 2, 2016.  View 12.02.16 event pics by Venice Paparazzi! 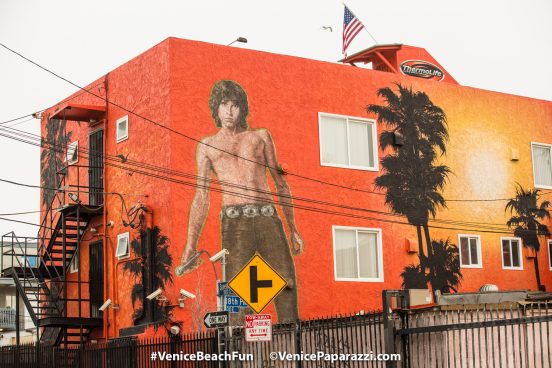 To all Doors’s fans!  When in Venice, grab a selfie with the Jim Morrison’s mural.  The mural by Rip Cronk is located on Speedway between 19th and 18th Street on the Muscle Beach Juice Bar building.  #VeniceBeachFun.  Check out VisitVeniceCA.com for all fun things to do and see in Venice, California! 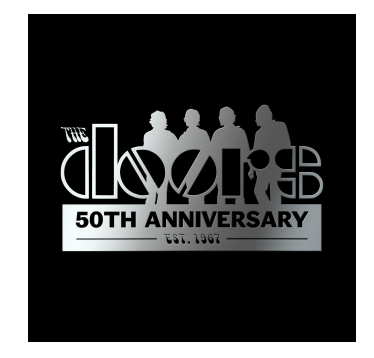 View all Day of the Doors’ event photos by Venice Paparazzi!

To stay up to date with the Doors, visit www.TheDoors.com