Dr. Naomi Nightingale, a life-long member of the Venice community and activist with the Save Venice coalition fighting to save the First Baptist Church of Venice, spoke about the history of the church onsite at the recent memorial for George Floyd and Friday’s Juneteenth Rally at Oakwood Park. The Venice Heritage Museum reached out to hear more in her words about the Church’s essential role in the Black history of Venice from its founding in 1912 through the present day:

“The First Baptist Church was the largest church in Venice with the largest congregation of African-American people who lived in Venice as well as surrounding areas. The first church, built in 1912, was in fact started by Black people from both Santa Monica and Venice. 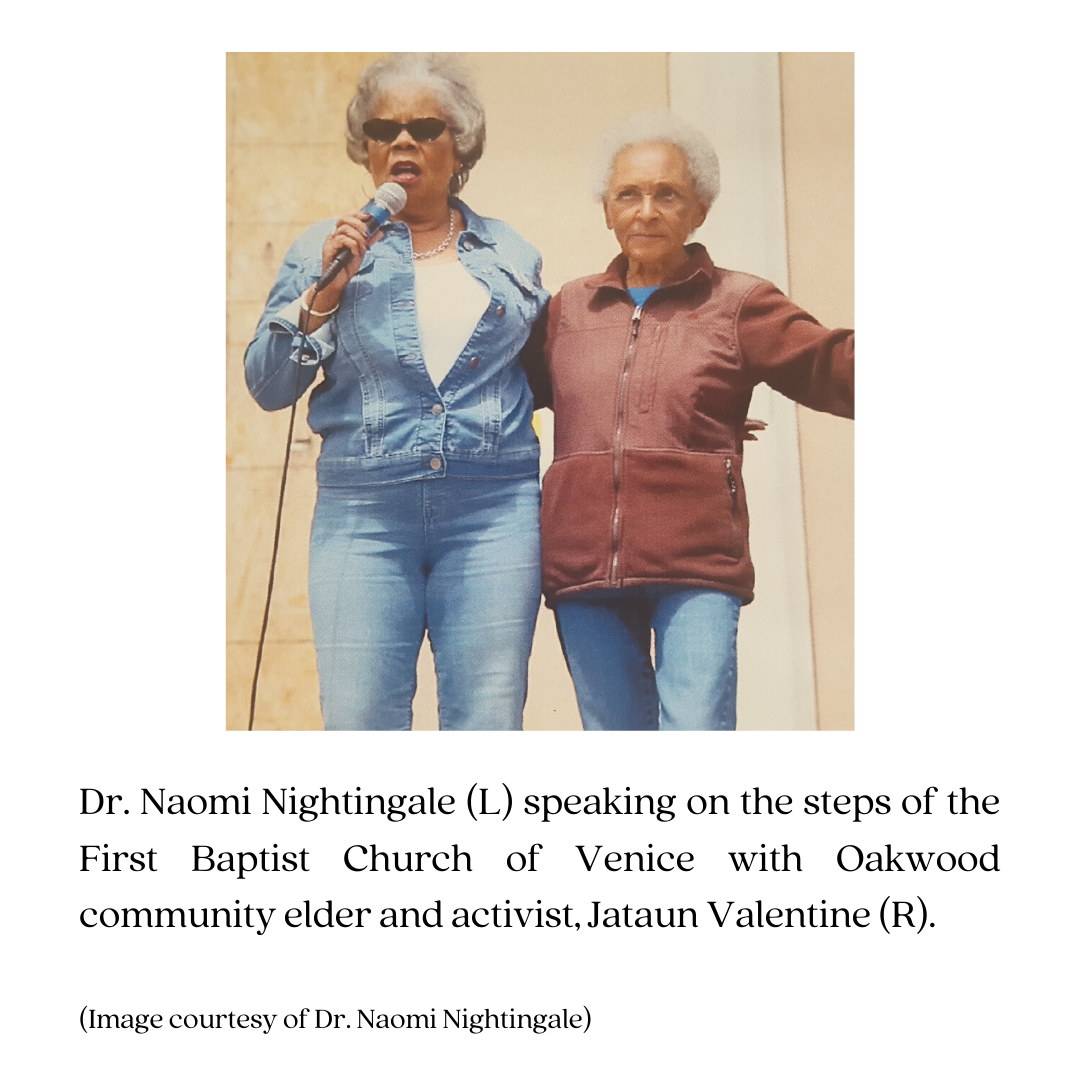 The meaningfulness of the church permeated the community in many ways. Members of the church served on missionary communities which reached out and assisted people who were ill and confined to their homes. If there was a funeral service for someone involved in the community where there was going to be a big response for people to come pay their respects, other churches used the First Baptist Church of Venice for the homegoing because it was the largest church.

It’s profoundly important to still see the church there on that corner. Even though right now the grass is high, and it hasn’t been kept up, it is a symbol to the community. It symbolizes history, culture, events, heritage, generations of family members and lets people still hold on to the fact that this is their community.

To see it used for anything other than a church where activities of the community can be extended out to a larger audience is to take away all of that. That’s the most devastating part.

When people look at what’s happening in the neighborhood, community, and what’s changing, it’s not that people think that everything should remain the same—it’s the bullying way changes are being made, the way that you don’t ask what this was like,  what was it like before, that what you’re doing might be a desecration, and do you even care?

With the church being the largest and most historically significant place of history in our community, it’s so offensive. So personally offensive that someone cares less about what it means to the community as to make it their personal residence. 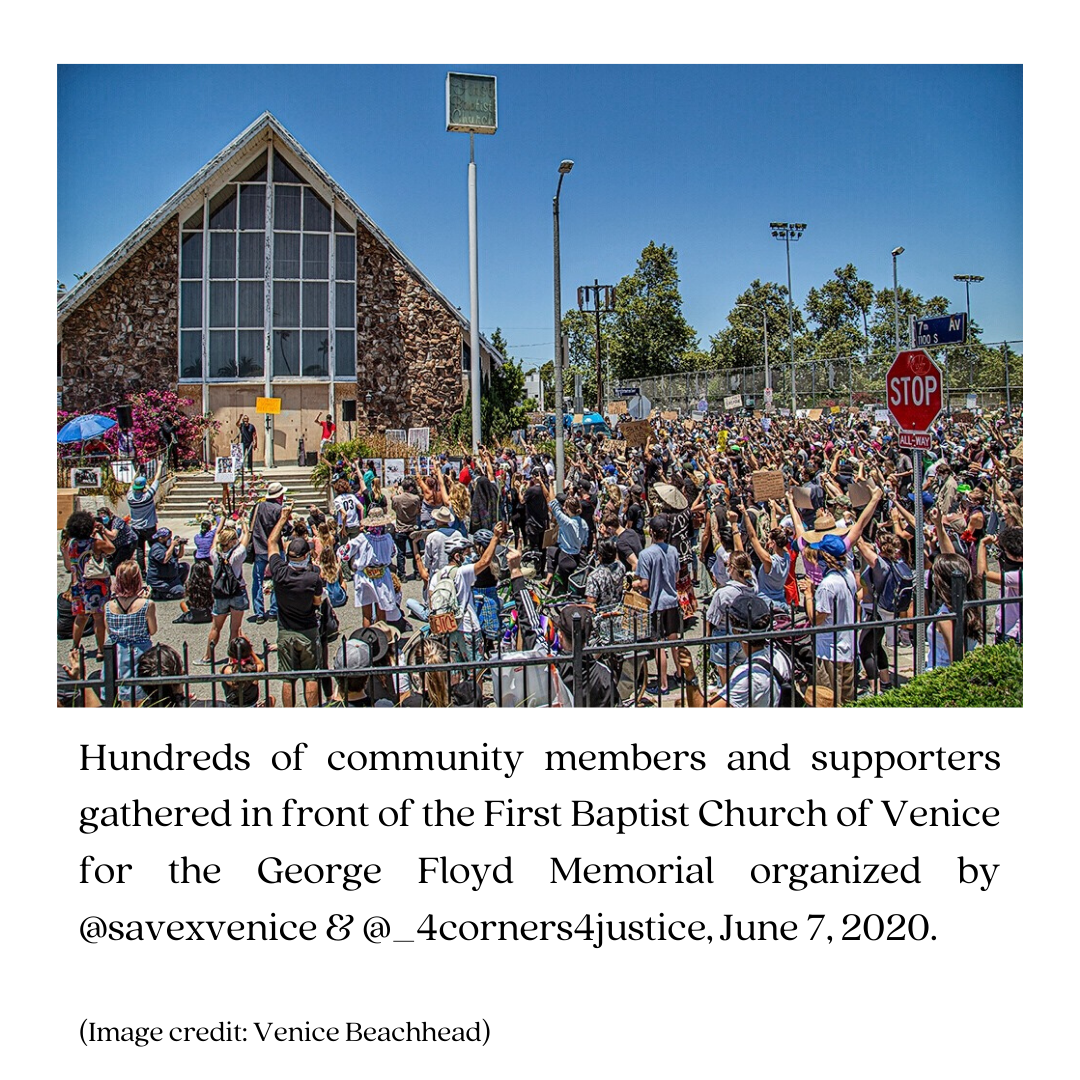 I feel personally betrayed by Reverend Horace Allen because in his early years of being in Venice we were in so many meetings together. We went to meetings on police relations together. The police would call us and we would show up to try and quell anything that might become inciting. We would come and talk to the people involved about the incident because we knew them.

I’ve spoken to people who were members of the church. They tell me their voices were overridden. Their votes were dismissed. Officers were isolated, ostracized; that the Reverend had people there who would support whatever he wanted to have happen.

Reverend Allen left Venice with $6 million as a result of him selling the church. And the church for all the years that it was an active church was built with money from the congregation. They paid off the church’s mortgage with their own money in a short period of time. So, actually, I believe Reverend Allen had no right to leave the community and not provide some compensation to those members who built the church and paid the loans off, and through the church, contributed to the community. I think the whole community was bilked by Reverend Allen.

When people drive down that street, whether they still live in the community or not, it keeps them anchored to their memories here. People who have moved away, when they come to Venice, they expect to see that church.” 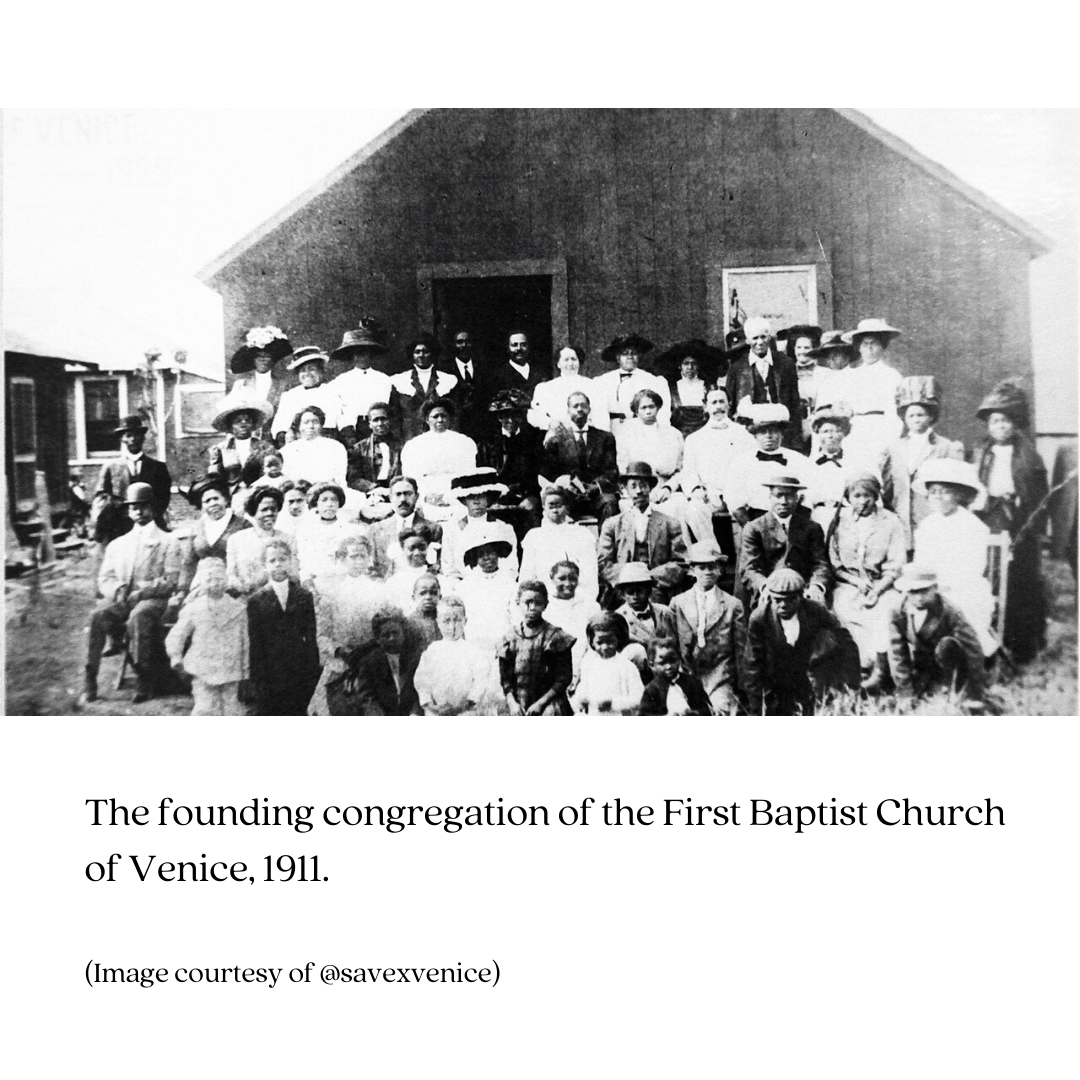 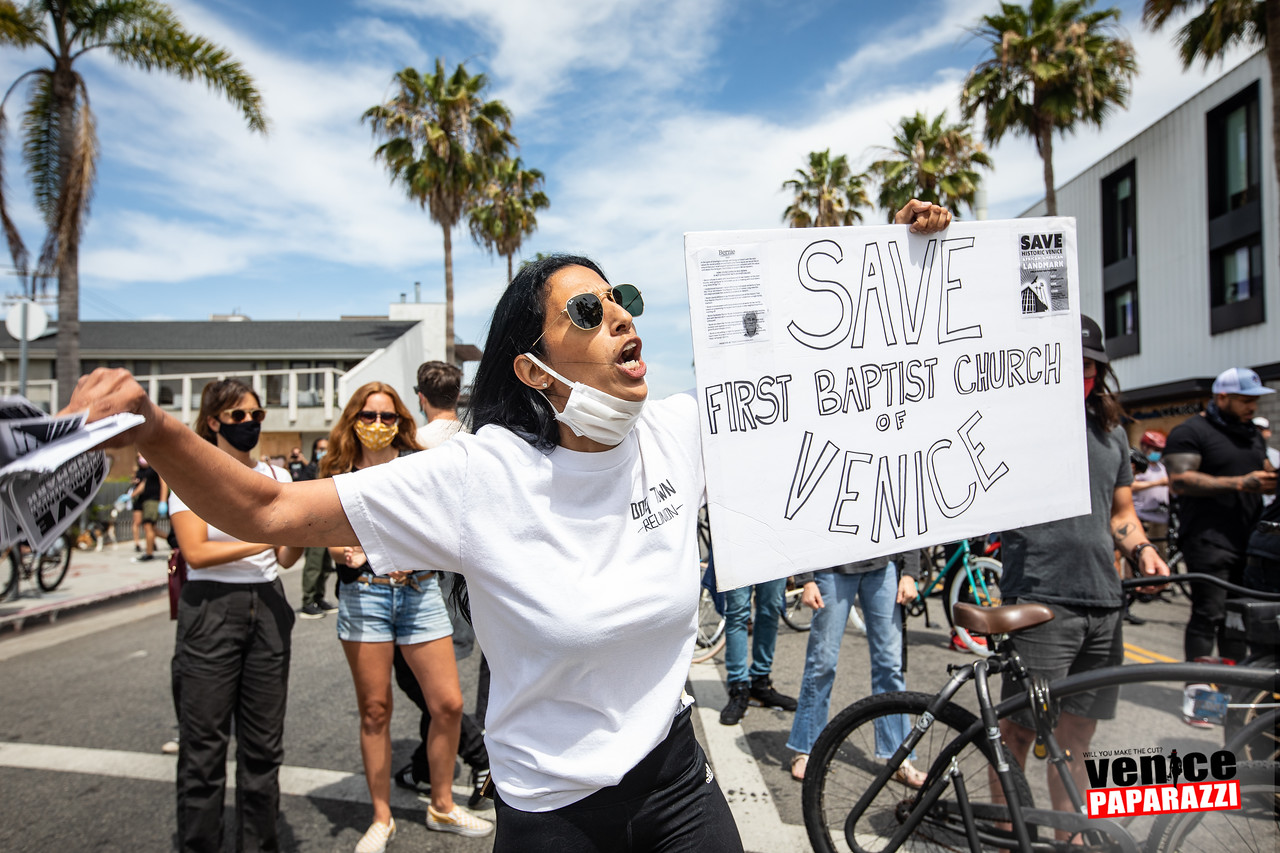 Join the effort to restore the historical First Baptist Church of Venice as a community space.

The vision for the First Baptist Church of Venice is to continue to maintain it as a community space that functions as an empowering center of healing, knowledge, and empowerment and to formally recognize it as a Historic Cultural Monument. The ideas include a library, museum, garden , and keeping the church edifice as a spiritual/communal gathering place for all Venetians and all people.  Click here for more info: savevenice.ca/campaigns/save-historical-black-church-venice-ca

Grant Historical Status to the First Baptist Church of Venice!

The First Baptist Church of Venice located at 685-687 Westminster Avenues in what is known as known as E.L Holmes Square is 109 years old. Established 45 years after slavery was abolished, it was the first and premier social and spiritual refuge for African Americans fleeing extreme racism dynamics in the South. This historical community landmark was fraudulently sold and is now under the danger of being reduced to a private home for a single multi-millionaire family. 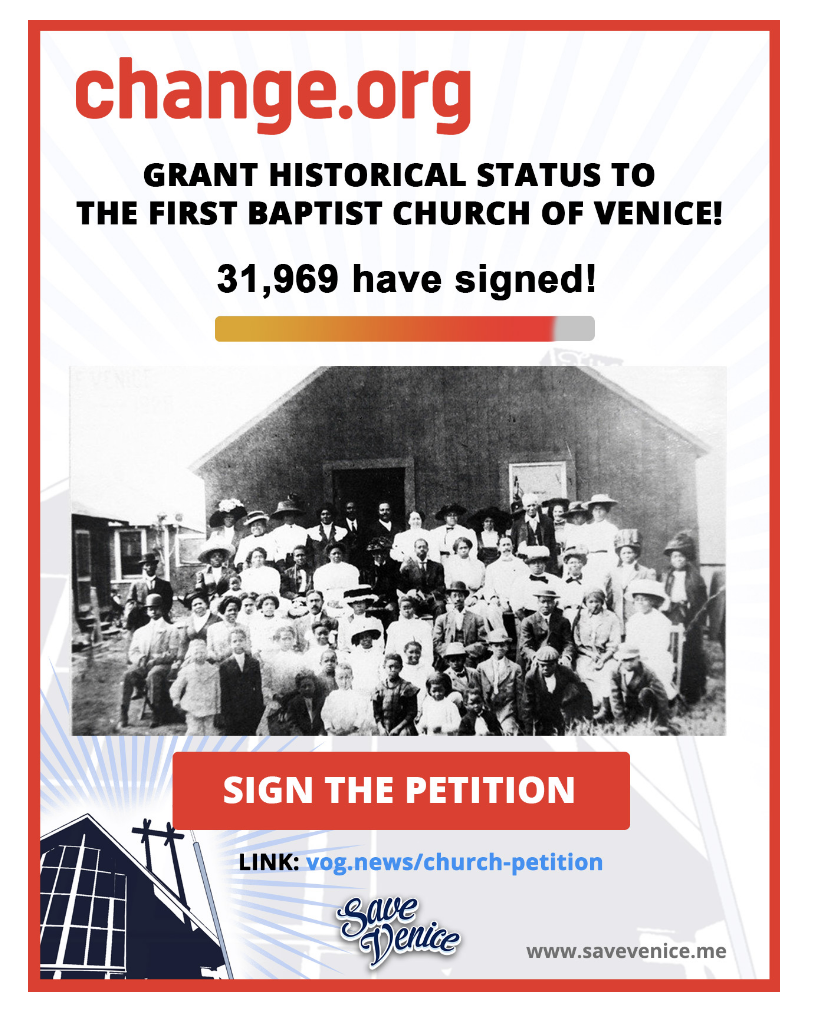 Learn more about Save Venice!