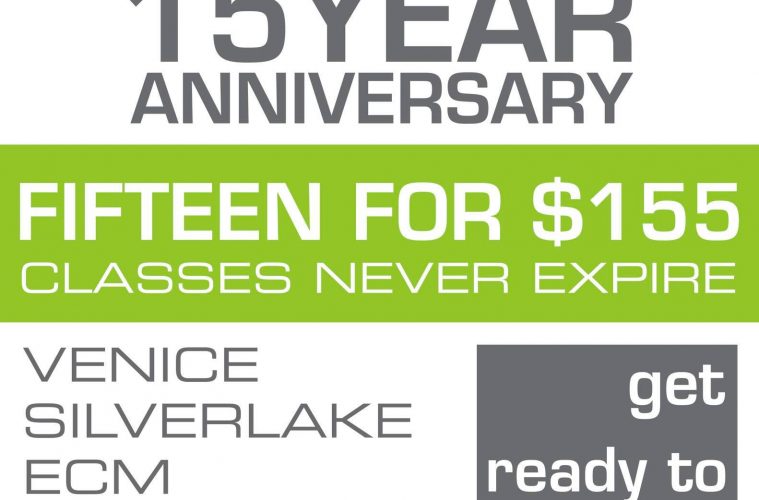 Congratulations to Kimberly Fowler and YAS Fitness Centers on 15 years! 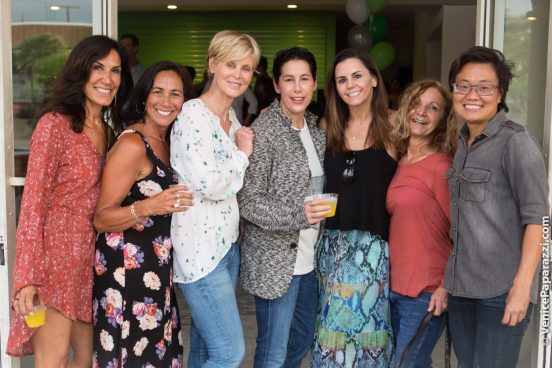 Venice Paparazzi was on the scene at YAS Fitness Centers’ 15 year anniversary and opening of their new location on Main Street.

YAS celebrates 15 Years with this amazing special!   To all our Venice, Silverlake, East Costa Mesa, Downtown LA, and Portland friends!  Get your yoga and spinning on as YAS!  Don’t miss out on this awesome deal of $15 classes for $155!   Go where Team Venice Paparazzi has been going since 2008! YAS is a game changer! Go2YAS.com 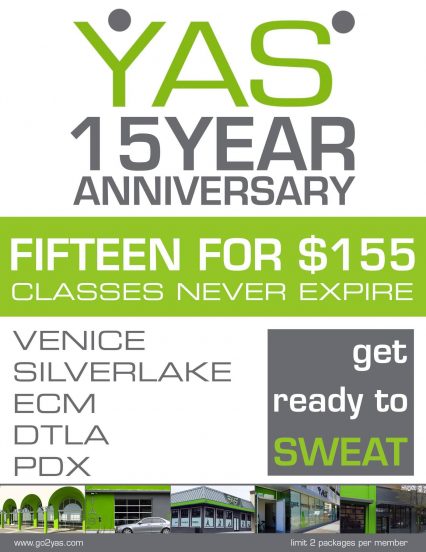 About YAS Fitness Centers:  The very first fitness program dedicated to the combination of Yoga and Spinning®, YAS Fitness Studios were created and founded in 2001 by Kimberly Fowler.   A hybrid fitness movement combining Yoga and indoor cycling, YAS is for people who value their health, fitness and time.  A smart combination of cardio, strength training, stretching and alignment, YAS is a succinct and balanced solution to all your fitness needs.  YAS has 5 locations: Venice, Silverlake, Downtown LA, East Costa Mesa, and in Portland. For more info, visit  GO2YAS.com

View the slideshow below for anniversary party and photo booth below by Venice Paparazzi. 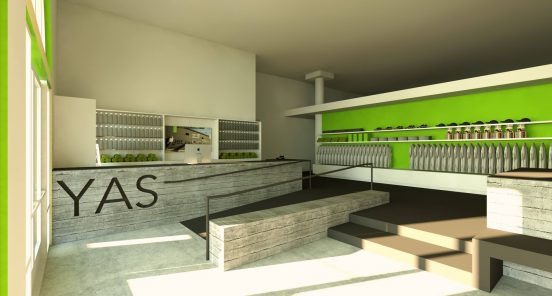 Get to know Kimberly Fowler, and the history of YAS Fitness Centers  via the video and article below!

Wow we are even more inspired and impressed by Kimberly Fowler!

“As James Brown is the, “Godfather of Soul”, Kimberly Fowler is the, “Godmother of Hybrids,” as coined by Shape Magazine.

Not your typical yogi, “Irreverent” is how CNN’s Dr. Sanjay Gupta described Fowler’s popular approach to yoga in his feature on her fun and unpretentious classes. 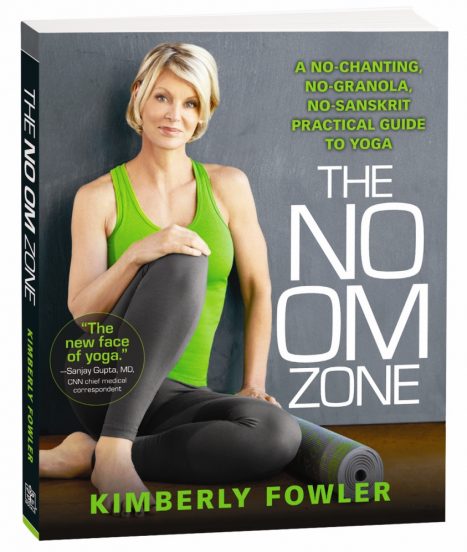 Innovative may be the most apt description for Fowler. “The Face of Modern Yoga”, Kimberly Fowler is founder of YAS Fitness Centers, author, philanthropist, feminist, athlete, speaker and survivor. Since opening YAS Fitness Center in Venice, California in 2001, Fowler has regularly shaken up the yoga and fitness worlds with her fresh, no-nonsense workouts designed for everyone from elite athletes to, well, everyone.

It started in 2001 with the original YAS Fitness Center. No one had ever combined yoga with indoor cycling before let alone built a studio dedicated to the combination. Some yoga purists ridiculed mixing hardcharging cardio with straightforward yoga. A revolutionary fitness idea was coupled with daring foresight in real estate. Kimberly opened her flagship YAS Fitness Studio on Abbot Kinney in Venice, CA., then a fringe area and now named, “The Coolest Block in America,” by GQ magazine. YAS Venice is undoubtedly an icon in the ultra hip hood.

“It was tough in the beginning; back in 2001 Venice, California was a “transitional” neighborhood, not exactly the place you would think an upscale innovative gym would be located, but I hung in there and the neighbor changed around me. YAS was part of the catalyst for that change. I have 500 students a day come thru YAS Venice”.

Five hundred students and one million dollars later, raised by Kimberly for ThinkCure, a community-based nonprofit dedicated to accelerating collaborative research for curing cancer where she’s on the board of directors, and close to a million in other philanthropic pursuits, she has come along way. Raising the bar for women in business, Kimberly is prominent motivational speaker and mentor of women. Her unstoppable spirit has served her community and business well.

YAS now has 5 locations. Kimberly wants to see YAS expand throughout the country. Intently supporting and growing the YAS brand she has produced several DVD’s of her revolutionary techniques and classes, designed a YAS clothing and accessory line, published 2 books. Kimberly is also in the throes of developing a television show. She is a woman with a vision and a mission.

It’s safe to say her formula for hybrid training is working. Kimberly’s YOGA for ATHLETES® DVD is so popular that students around the world have taken to posting photos on Facebook of themselves holding it up at famous locales. Referred to as “the athlete’s secret weapon”, British track star Tasha Danvers purportedly won the ‘08 Beijing Olympics 400m hurdles bronze with the help of YOGA for ATHLETES®, overcoming a host of personal and professional hurdles along the way.

Fowler understands a thing or two about hurdles. While still a twenty-something triathlete, she was diagnosed with brain cancer. Like Lance Armstrong a decade later, Fowler battled back from her death sentence to return to competition as an elite athlete. She credits yoga as central to her recovery and comeback. Going stronger than ever nearly three decades later, she’s spoken on behalf of Livestrong, Armstrong’s foundation dedicated to helping people fight cancer. She’s also spoken on behalf of Nike, having served for years as the companies Yoga Athlete/Spokesperson, and she is now the “Yoga Expert” for the LA Marathon. She was featured in a new documentary series called Angelino on PBS. The episode titled “Healer.” Kimberly’s appearances are becoming more frequent as she continues to dedicate herself to helping others.

With so many yoga-related accomplishments, it’s tempting to view Fowler as some kind of power yogi—that is, if such words and hero worship didn’t make her cringe. “I’m not your guru, you are,” is a common Fowler-ism. Open and accessible, Fowler means no disrespect for yoga traditions and their spiritual components, she’s just not into imposing dogma. Happily forgoing Sanskrit and chanting hasn’t always endeared her to the yoga establishment, but that’s never been her goal. Fowler wants to change the minds of everyday people about yoga. She has made yoga accessible to the masses, not just the chosen few. 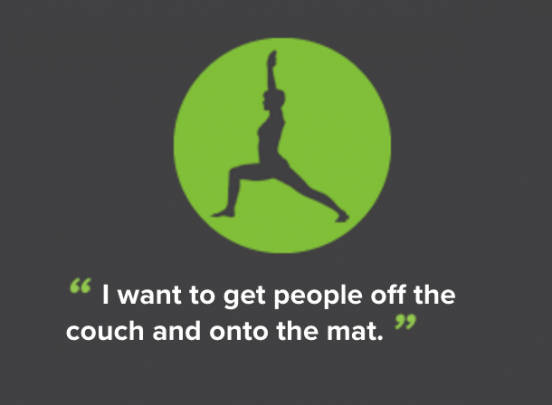 If you’ve cracked a magazine or newspaper over the last decade, chances are you’ve read about Fowler, her books, DVDs or YAS Fitness Centers. It’s her goal to get people “off the couch and onto the mat”. She’s investing in keeping her YAS studios the hot spots for fitness, offering workshops and retreats with guest appearances. If you can’t get in to the studios her DVD’s and books are always available. Her newest book is “Flat Belly Yoga” by Prevention. Considering the growing interest in slimming down our waistlines In her 50’s she is leading by example, practicing but not…preaching.

Do some yoga and spinning at YAS Fitness Centers!  www.Go2Yas.com