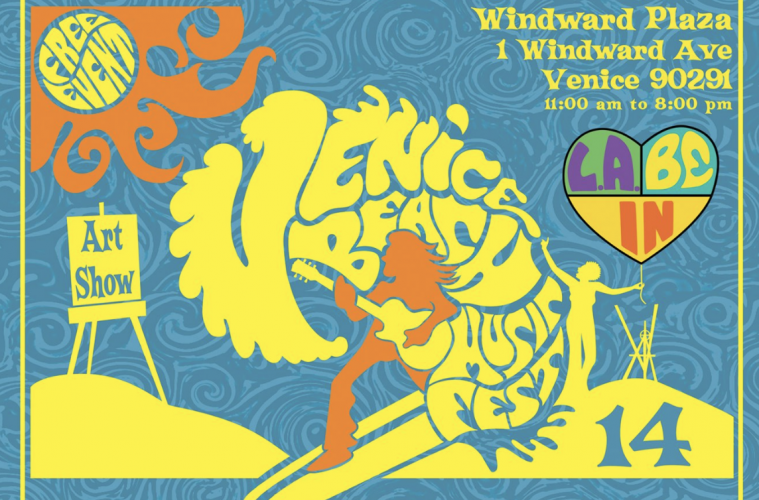 The annual Venice Beach Music Fest celebrates its fourteenth year of totally free entertainment at the beach with a two-day festival on Saturday and Sunday, July 20 & 21, 2019, from 11:00 A.M. to 8:00 P.M. in Windward Plaza Park (1 Windward Avenue, at the boardwalk). Both days are chock full of music, art, and literature, and, as always, are free to the public. This year’s two-day festival is in celebration of the 50th anniversary of the festival that went down in history, Woodstock! Many of the musical performers over the two-day event were selected to celebrate and remember Woodstock’s musical history and the spirit of peace and love that influenced so many. 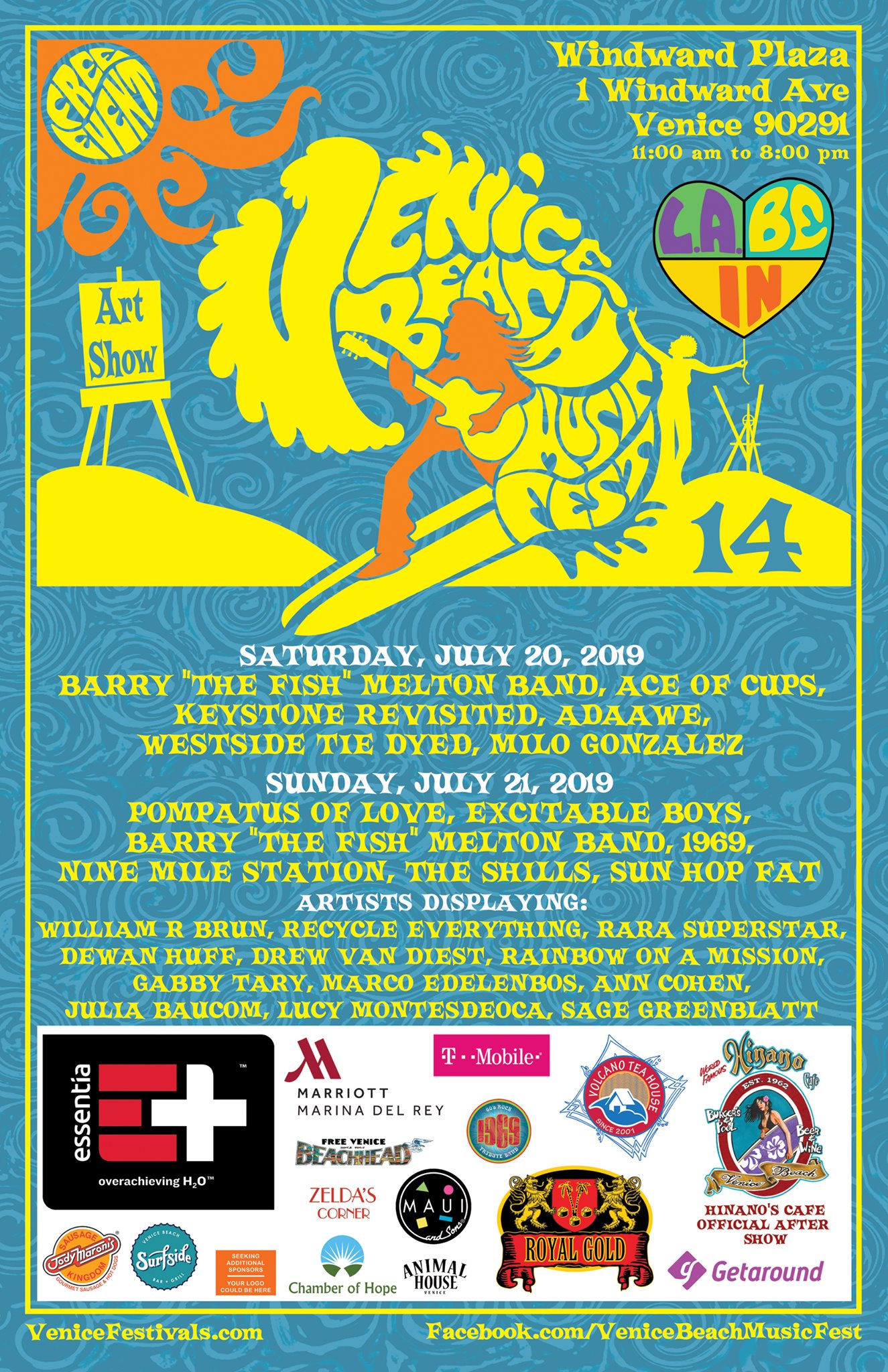 Sunday’s musical performers include funk/jazz band Sun Hop Fat, power pop rockers The Shills, country rockers Nine Mile Station, classic rock band 1969, a reprise of Barry “The Fish” Melton Band, The Excitable Boys—a Warren Zevon tribute featuring members of his ’80s touring band, and last but not least, the Ultimate Steve Miller Band tribute Pompatus of Love (featuring SMB member and Rock-n-Roll Hall of Famer Greg Douglass). Brian Hassett, author of The Hitchhiker’s Guide to Jack Kerouac teams with original Merry Prankster and friend of Neal Cassady George Walker to perform a selection from their live show, “Jack & Neal Ride Again.” Also, in addition to live painting the bands from the side of the stage during the festival, artist Ann Cohen will also read poems by her late husband, Allen Cohen, publisher of the original Haight-Ashbury consciousness-raising publication, The San Francisco Oracle. Both days of musical entertainment will be emceed by Marc Blackbird (Champa 51) and actress Michelle Claire Pentreath. In conjunction with the festival, local bar Hinano Café will continue the celebrations beyond the festival times by hosting evening post-show events on Saturday (Jah Faith and the Royal Lineage Band) and Sunday (The Brobots).

This year’s visual art show includes exciting new work from some new and returning artists: William R. Brun, Recycle Everything, RaRa Superstar, Dewan Huff, Drew Van Diest, Gabby Tary, Marco Edelenbos, Julia Baucom, Lucy Montesdeoca, and Sage Greenblatt. Rainbow on a Mission will host a DIY public art project, “Marble Your Own Bandanna.” Eclectic Hoops will be on hand with hoops for play and sale. A horticulturist from Humboldt’s Royal Gold Potting Soil will be available to answer questions about their product line. Auntie Anne’s Pretzel Truck and The Write Juice Truck will have food and drinks for sale, and sponsors Essentia Water and Harmless Harvest coconut water will be sampling their product for festivalgoers. VBMF14 is happy to welcome Chamber of Hope, a local nonprofit whose mission is to help reduce homelessness.

Festival producer Milton Rosenberg, in his fourteenth year of production of free festivals in Venice, has co-branded this year’s Venice Beach Music Fest as the “L.A. Be-In,” in honor of the Human Be-In, a free gathering in Golden Gate Park in 1965 which was a key gathering in the emergence of expanded consciousness in the ’60s. “This year’s event celebrates the 50th anniversary of Woodstock, which helped bring the ideals of the counterculture to the forefront of America. Venice was integral to that emergence of the Beat art forms even before that time, and my hope is that this year’s festival embodies the best and most hopeful of those ideals as they’ve evolved over a half century. The festival is dedicated to the memories of Jerry Garcia, Chet Helms, Merl Saunders, and Michael Hinton. Let’s celebrate art, music, dance, literature, and love. Always go Furthur!”

.
All are invited for two days of fun at this year’s Venice Beach Music Fest 14 on Saturday and Sunday, July 20 & 21!