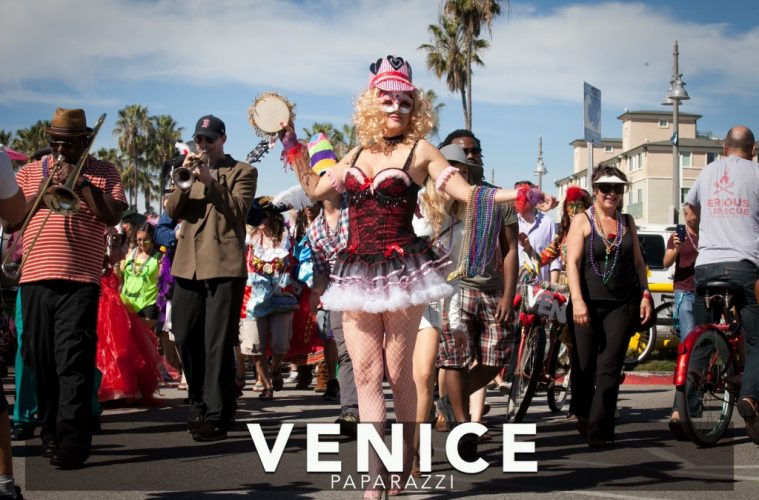 Rain or shine! The Venice Beach Mardi Gras Parade is this Sat. Feb. 18! Join in the #VeniceBeachFun! 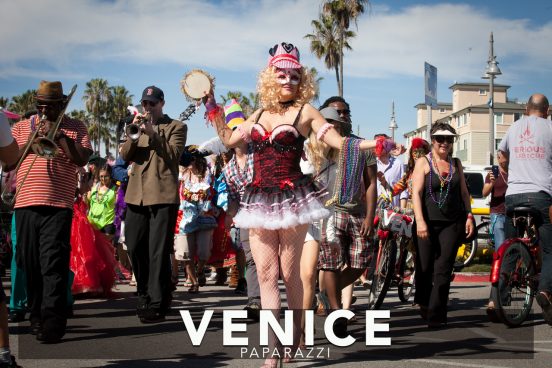 Get your costumes ready, and join in on the fun!

This annual event is hosted by Miss Jessica and the The Gumbo Brothers.  View Mardi Gras pics by Venice Paparazzi below!

Get your costumes ready, and join the parade on Feb. 18th!  The theme is CIRC DU L.A.

Parade led by Miss Jessica and the The Mudbug Brass Band and The Venice Electric Light Parade will be bringing up the rear.

“Venice held its first annual Mardi Gras Festival August 16-18, 1935. The three day event featuring parades, costumes, contests and entertainment, was modeled after the New Orleans event.  It began with the arrival of King Neptune in an outrigger canoe followed by Queen Venetia’s coronation and a royal procession along Ocean Front Walk. The queen read a proclamation commanding her subjects to engage in three days of fun and frivolity. The afternoon parade featured floats and costumed merrymakers wearing enormous plaster of paris heads that were manufactured in Arthur Reese’s studio. 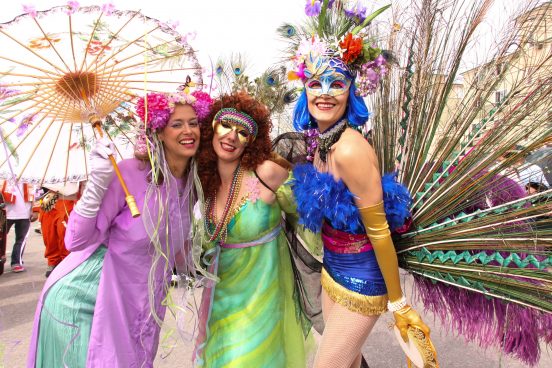 Windward Avenue was roped off for a street carnival where wandering gondoliers entertained. The parade included Keystone Cops and people wearing enormous plaster of paris head gear. The king and queen’s float along Venice’s Ocean Front Walk. – 1938. There was an afternoon treasure hunt for children and an evening program of aquatic events on Saturday. Sunday’s Miss California beauty pageant drew huge crowds, and a Mardi Gras Ball in the evening capped the celebration. The Mardi Gras Festival became an annual event of considerable importance prior to World War II. It became bigger and better each succeeding year and civic pride improved. By 1941 five hundred thousand people attended the expanded four day event in its final year.  For more history on Venice, visit Jeffrey Stanton’s website  ,  or purchase his book “Venice California-The Cooney Island of the Pacific“.

Thanks to Miss Jessica and the Gumbo Brothers for keeping the Venice Beach Mardi Gras Parade tradition alive for the last 14 years! 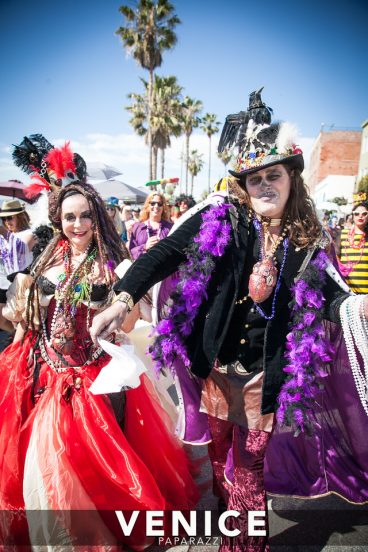 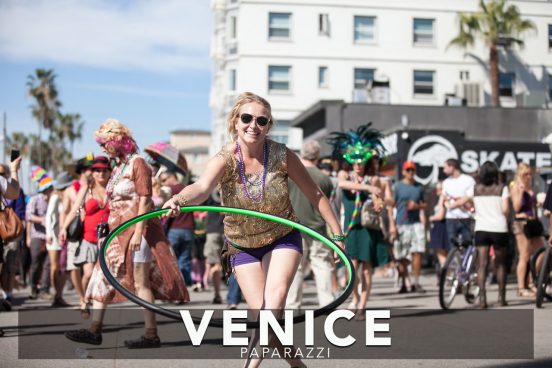 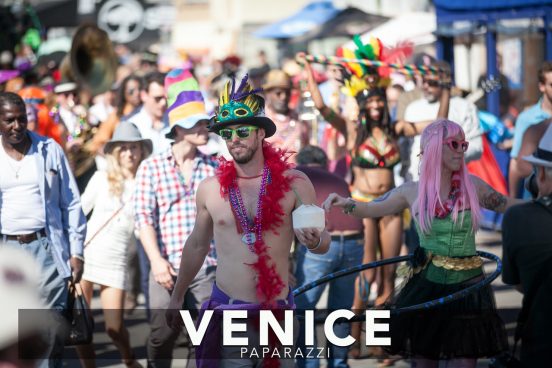 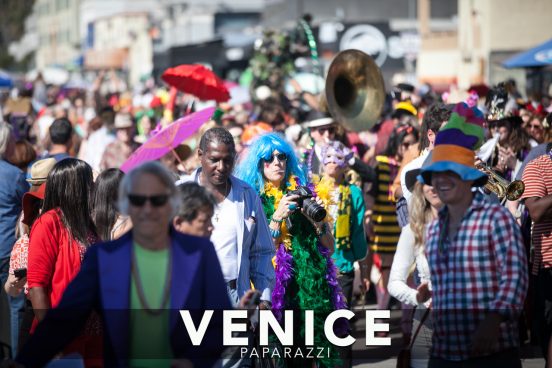 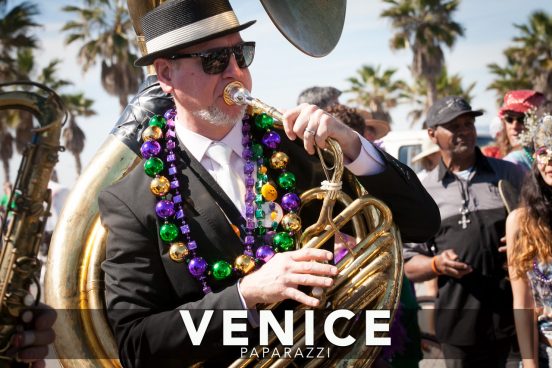 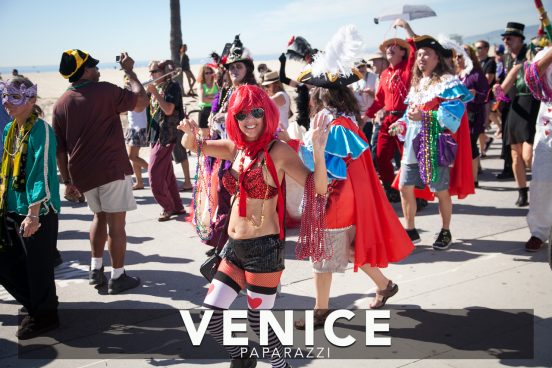 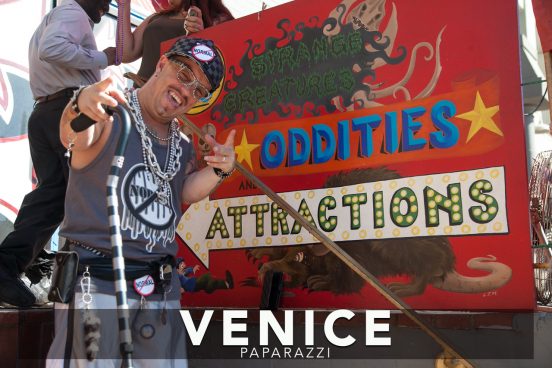 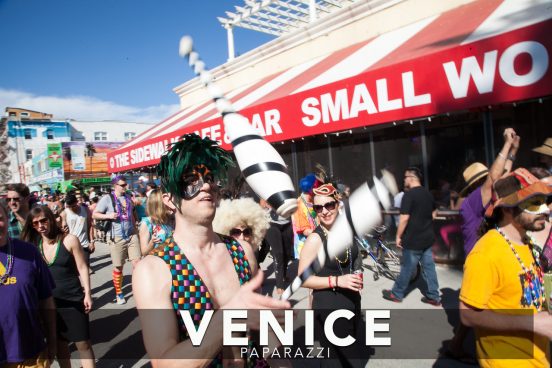 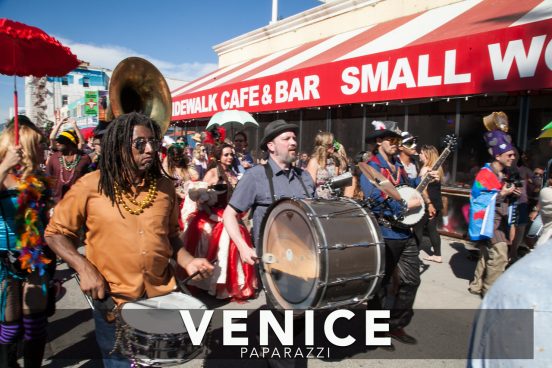 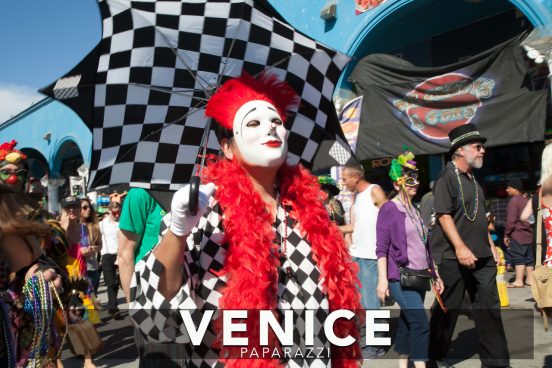 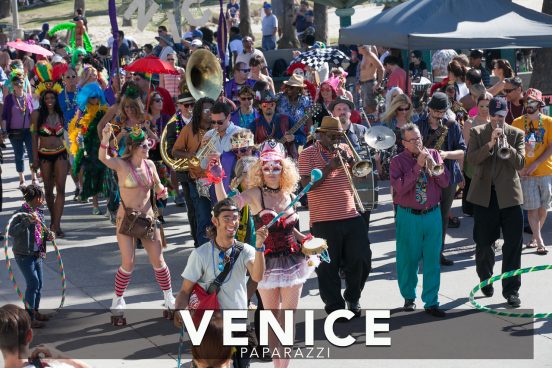 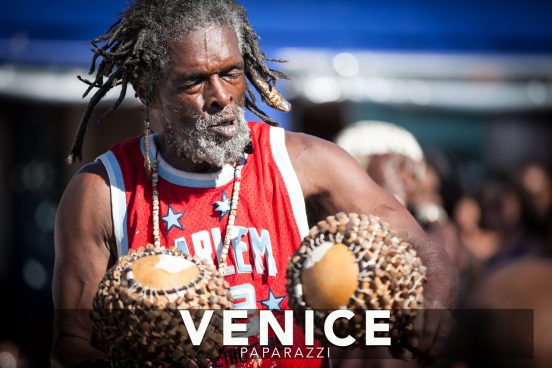