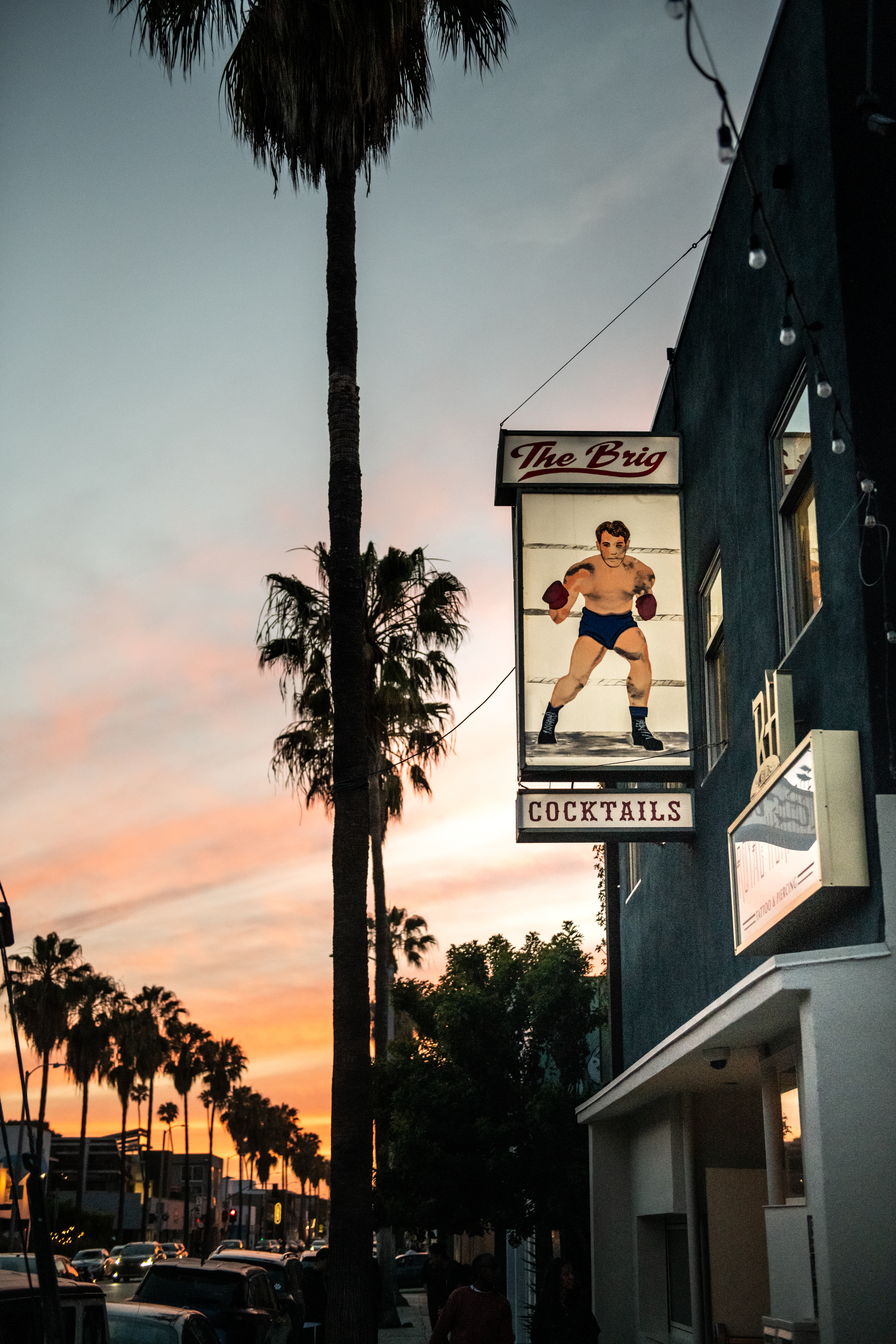 THE BRIG has been instrumental in the Los Angeles food truck explosion in the early 2000s with its parking lot serving as the launching space for several well known trucks. In commemoration of the anniversary, THE BRIG has organized food trucks operation from day to night, including the world-famous Kogi Truck.

Babe Brandelli’s original THE BRIG, established in 1952, boasts a bohemian charm and charisma reflecting the neighborhood’s diverse spirit. The iconic bar serves as the gateway to Los Angeles’ premier dining and shopping mecca in Venice, California. When travelers first glimpse THE BRIG’s iconic sign above the illustration of renowned Golden Globes boxer and former owner, “Babe” Brandelli, they know they have arrived in the heart of the Abbot Kinney district. Once through the weathered door, guests are greeted by a refreshed mid-century interior, influenced by the popular modern stylings during the early years of “Babe” Brandelli’s Brig. At the rear of the bar is the entrance to an expansive patio, flanked by the famed Art Mortimer mural-with-in-a mural. 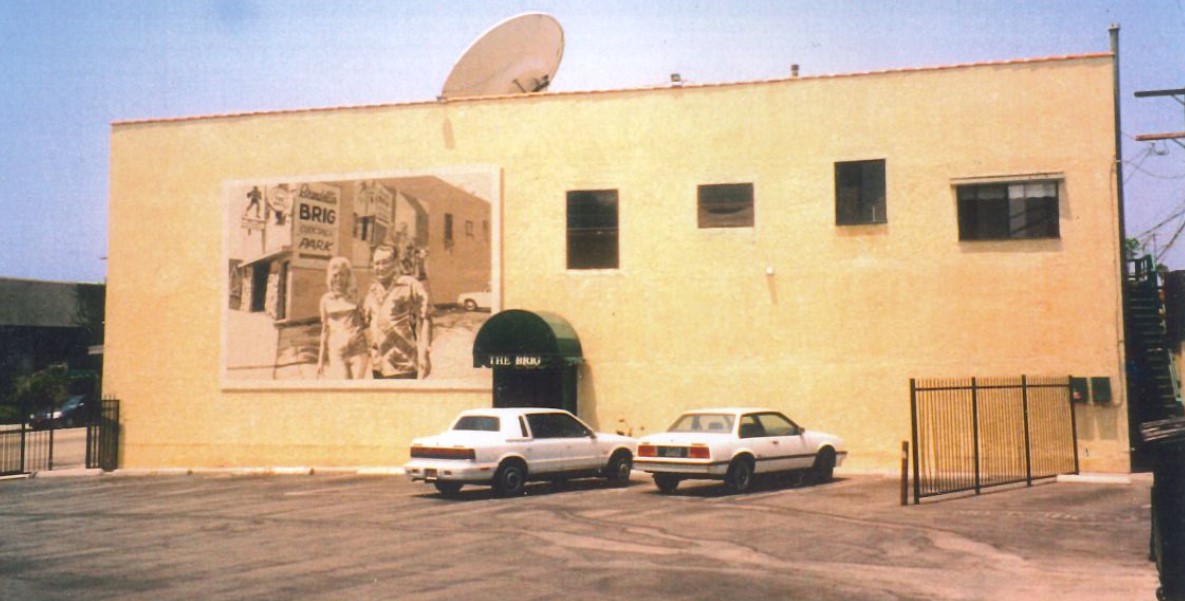 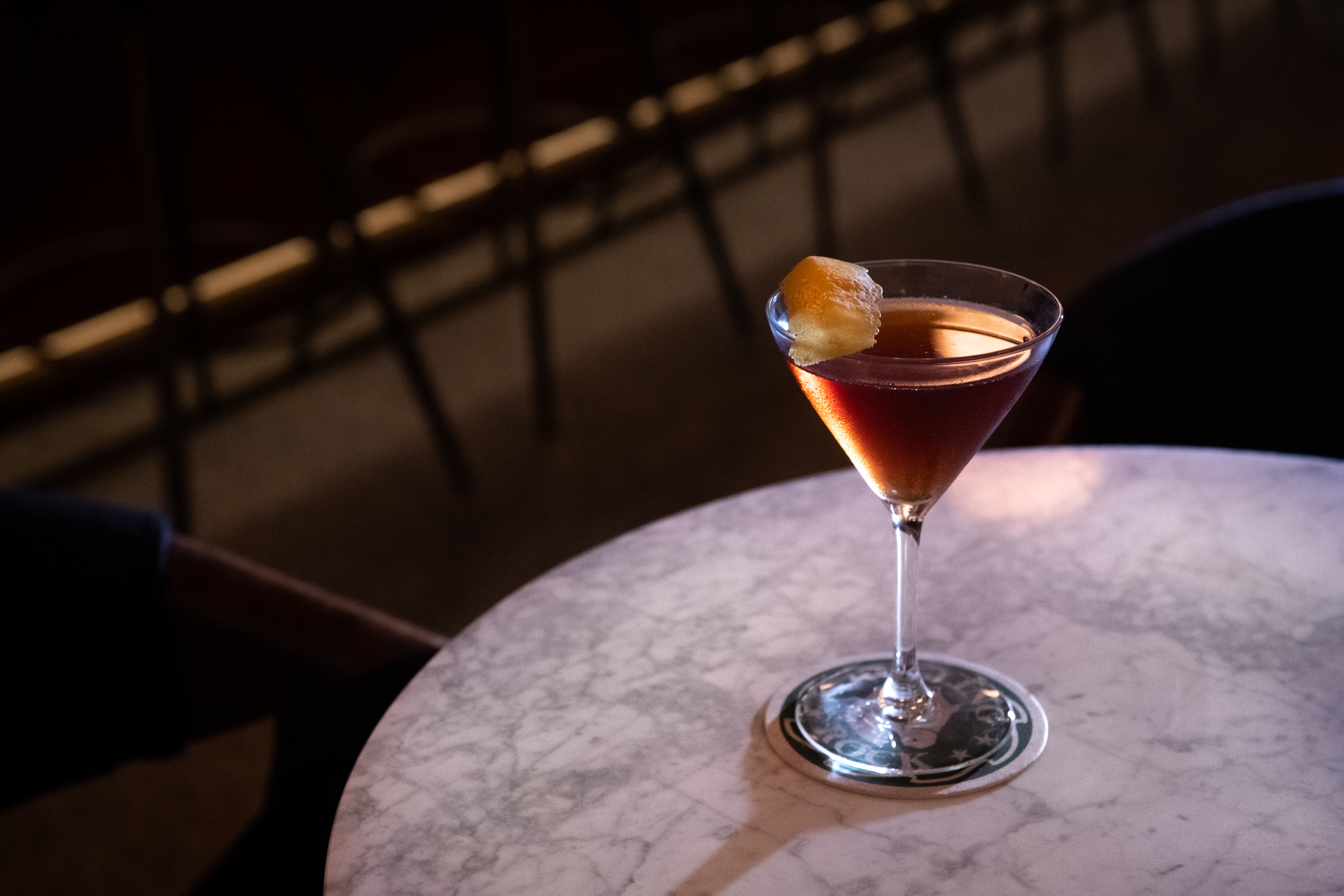 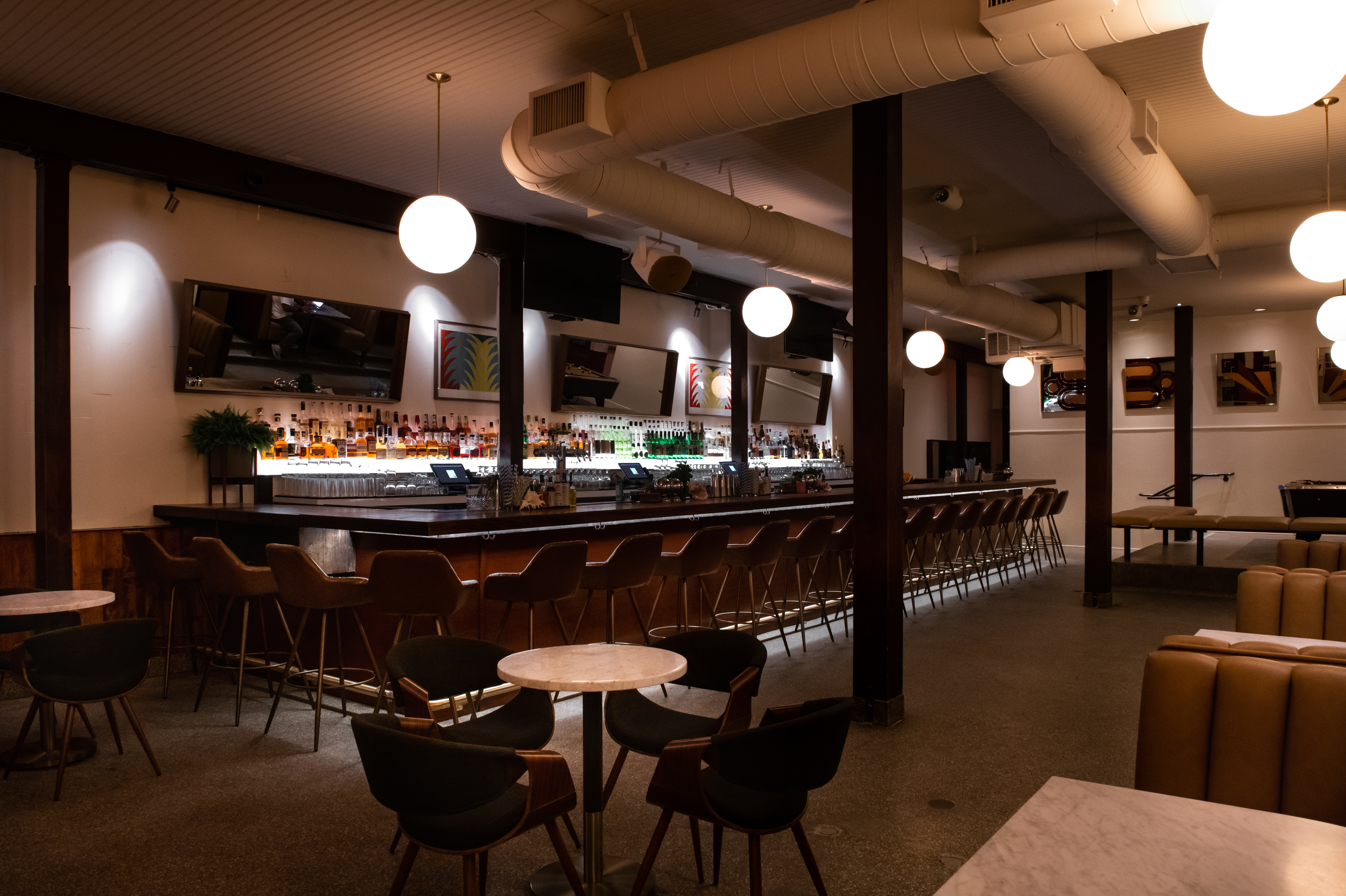 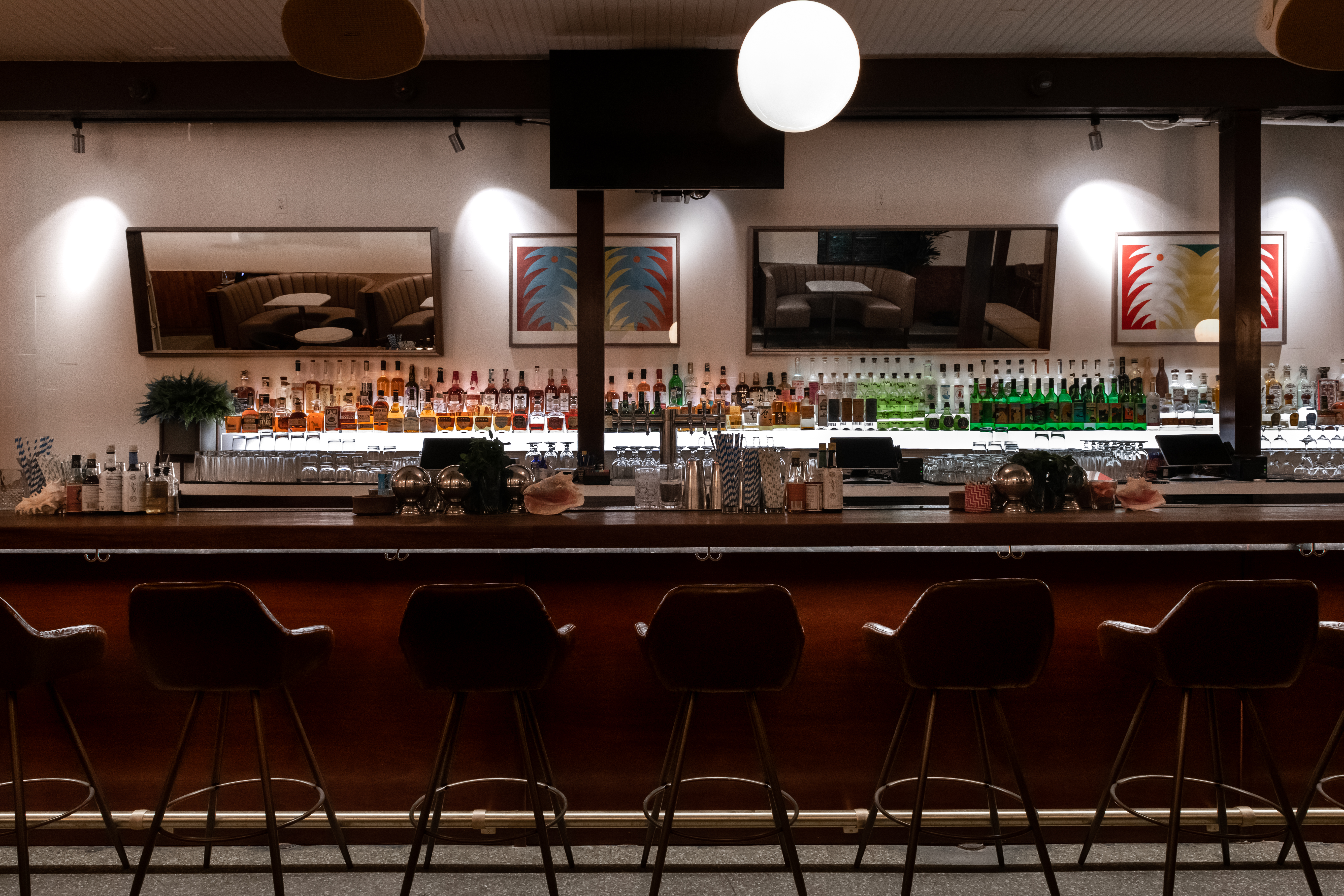 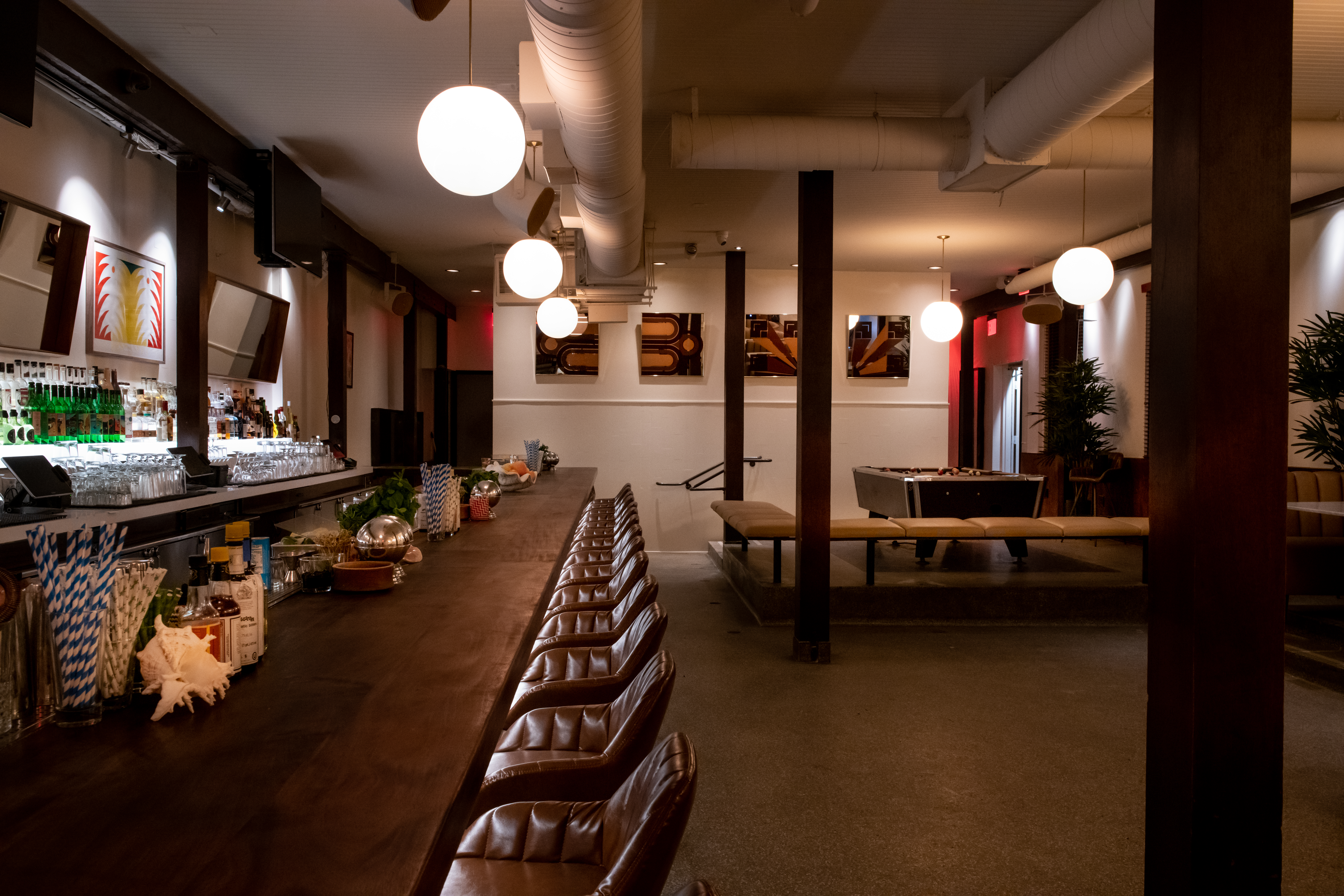 In 1952, local Venice boxing hero Babe Brandelli retired from boxing and opened “Babe Brandelli’s Brig.” For over 40 years, Babe and his descendents operated THE BRIG at its present location while living in the 2nd floor apartments above. A classic Mom & Pop neighborhood bar, THE BRIG was a local favorite for inexpensive alcohol served nearly all day and night. In later years it was a ‘dive’ for bikers and others attracted to such venues. In 1997 THE BRIG building was purchased by David Paris and Nancy Cowen, who also operated the bar briefly before leasing the bar premises and selling the business to Dave Reiss. Paris and Cowen interviewed various bar operators before selecting Reiss based on his long experience in owning and managing similar operations. Reiss had recently renovated and opened Sugar, a very popular dance club in Santa Monica, which was acclaimed for cutting-edge design. Paris and Cowen wanted an operator that would invest significant capital and bring fresh design ideas appealing to an upscale clientele. In 2021, Dave and Patti Reiss partnered with bar impresario Jared Meisler and refreshed THE BRIG to its present day with an interior design remodel, added patio and updated bar program. THE BRIG has been favorably reviewed in the Los Angeles Times, New York Times, Los Angeles Magazine, Architectural Digest and other publications. THE BRIG helped launch the food truck trend in its parking lot, creating recognition of several local chefs and culinary artists. Both the parking lot and the bar were featured in the movie Chef.

Jared Meisler, raised in Los Angeles, discovered his passion for nightlife and bringing people together while playing music in clubs on the Sunset Strip. Meisler began his career promoting shows and parties and booking fellow musicians and DJs in old mansions and warehouses throughout Los Angeles. In 2006, Meisler partnered with restaurateur and hotelier Sean MacPherson. Together they opened Bar Lubitsch, an art deco-styled Vodka bar in West Hollywood, then the instant classic – The Roger Room, followed by The Pikey, a high-end pub on the Sunset Strip. Desiring to expand his network, Meisler partnered with Artist Andre Saraiva to open The Friend, in Silverlake which instantly became a hub for artists, musicians and all creative types. The Friend, known as one of the coolest bars in town, expanded to Venice with The Little Friend. The Little Friend is located just behind the former Sunny Spot in Venice and led to the successful collaboration with Dave & Patti Reiss (Reiss Co) and the transformation of Sunny Spot into Nueva in 2020.

Dave Reiss is an icon of the L.A. scene, responsible for opening Swingers on Beverly, Red, Sugar, THE BRIG, and half a dozen other properties. Patti met Dave while working in marketing at New Line Cinema, having spanned an extensive career in the entertainment industry from Warner Music Group to BMG. Patti is no stranger to the food world, having founded a family baking company patronized by hotels and gourmet food shops in the Twin Cities. After THE BRIG, Patti and her husband Dave opened a series of properties under the Reiss Co umbrella, beginning with Beechwood in 2004. Together, the two share an entrepreneurial spirit that has grown over the years into the vibrant Reiss Co portfolio of restaurant and bar concepts providing outstanding food, wine, cocktail, and service in exceptional spaces throughout their Los Angeles community.