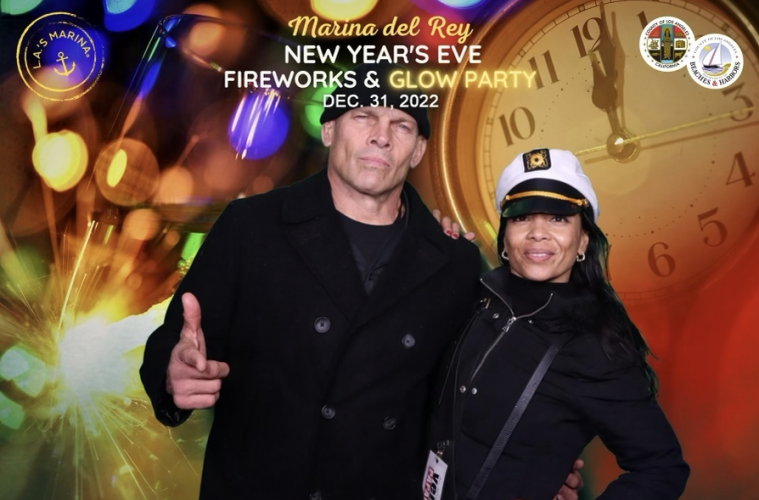 Venice Paparazzi 2022, A Year in Review

Alex Stowell here!  2022 was Venice Paparazzi’s 19th year in business since our humble beginning as a photo key-chain kiosk on the Venice Boardwalk in 2003. 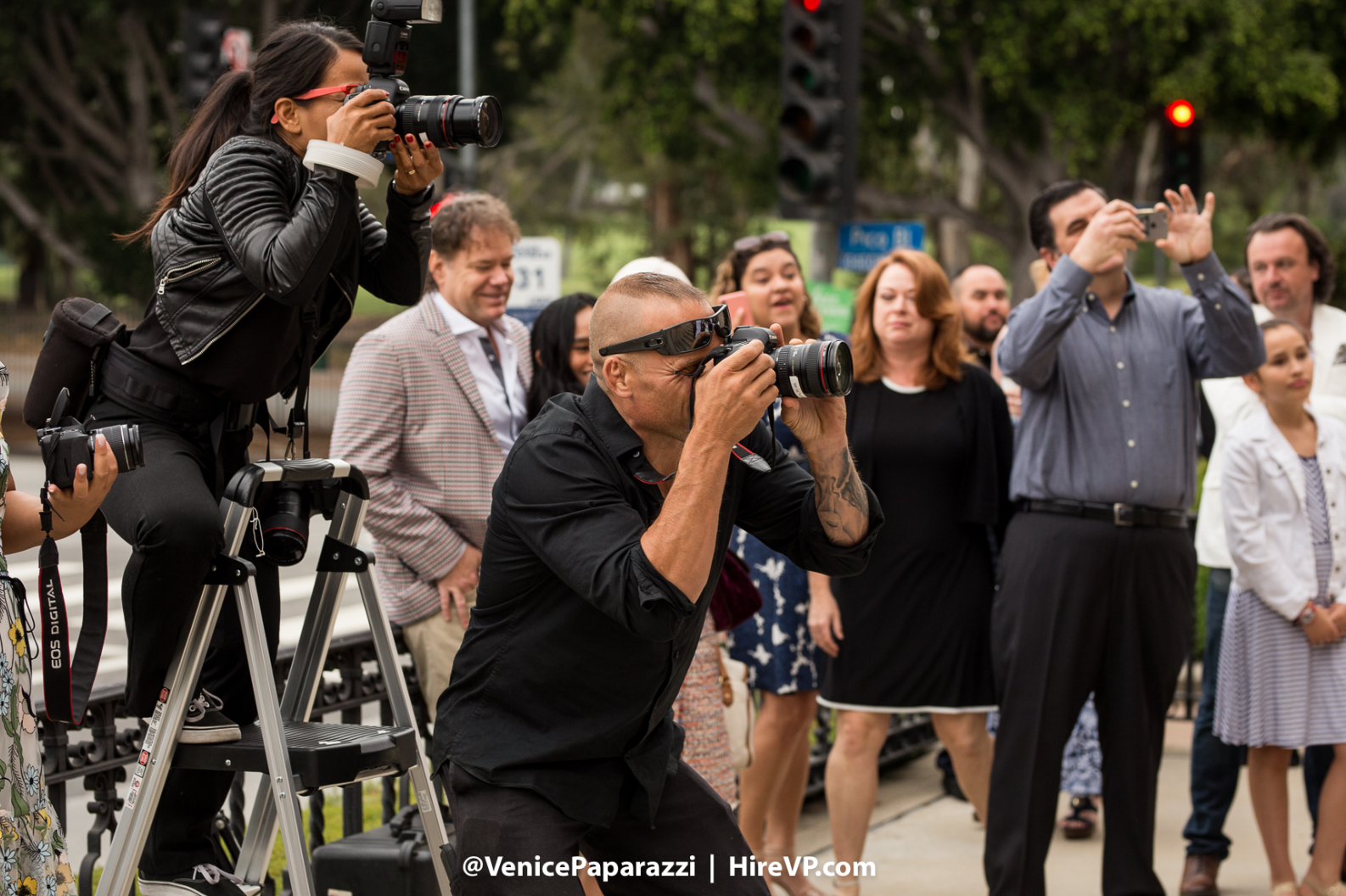 Alex and Edizen Stowell have been married 22 years, which shows as they overlap each other telling their origin story and the genesis of their photo agency, Venice Paparazzi.

The tattooed and muscular Alex was working the heavy bag at Muscle Beach. He’d come west from Washington, DC, to play football at Golden West Community College before getting a scholarship to the University of New Mexico and finishing school at CSU-Northridge. He returned to Hollywood, eventually landing in Venice in 1999.

Edizen was visiting her sister, a traveling nurse in Burbank. A boxer herself, having won boxing titles and awards in her native Canada, Finland and Sweden, Edizen noticed how low Alex hit the bag. 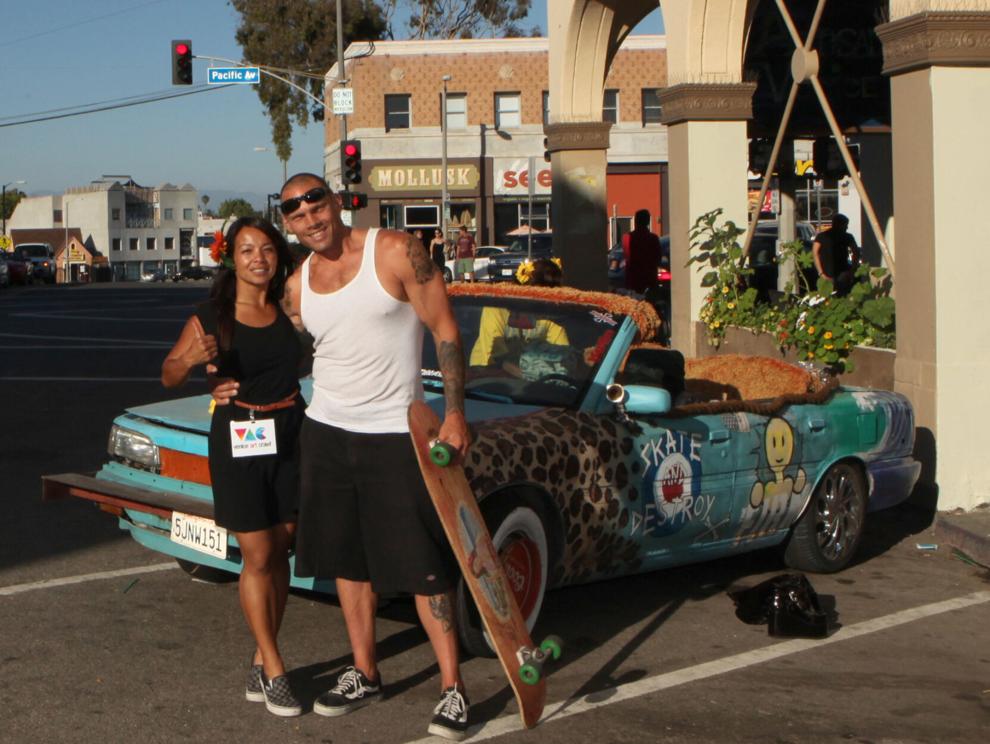 “I said ‘If you punched up a little higher, it wouldn’t even look like you’re beating up kids’,” recalled Edizen, “and he turned around and he flashed his great smile. We talked for 45 minutes straight.”

They parted ways briefly, he to his job at Yankee Doodles on the pier, she to a capoeira class, but she returned to Venice that night. Edizen and Alex spent every day together for the next six months. The week before Edizen’s scheduled return toCanada, Alex proposed. They got married in Las Vegas on Feb. 6th, 2001, with theirdog Butterface walking Edizen down the aisle.

The new couple bounced around a few places, even sleeping on the beach and in Alex’s car briefly. Sympathetic Rec & Parks employees would let them charge their cell phones in the office.

“It was that 20s bliss,” Alex said of their early relationship despite chaotic living arrangements with roommates who were “tweaker chicks” and “raging alcoholics.”

Making around $100 a day at his server job, he and Edizen saved money by taking advantage of early bird breakfast specials at the Omelette Parlor in Santa Monica and splitting swordfish salads for lunch at Enterprise Fish Company. Edizen got a job at House of Flies sunglass shop and they both took catering gigs.

“We were taking whatever we could to survive,” Edizen said, “just to make ends meet or just to pay the bills.” 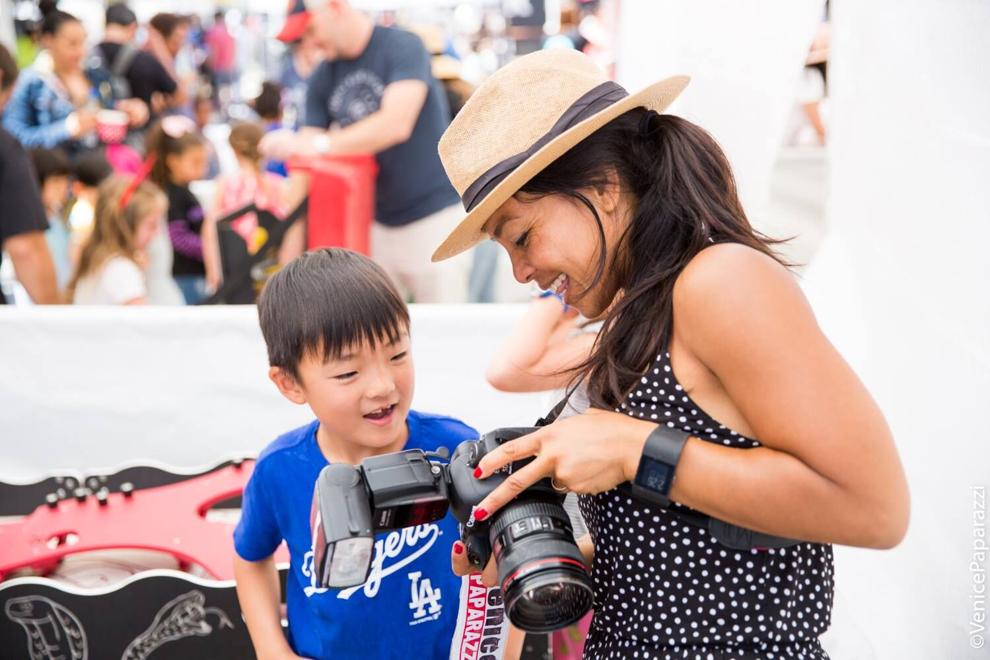 They eventually landed a plum beachfront apartment with garage space vacated by a fetish-party-attending man who succumbed to a crack addiction.

From their new vantage point, Edizen noticed how happy the tourists seemed on the boardwalk; it reminded her of a Canadian amusement park. She saw an opportunity.

In 2003, the enterprising couple set up a photo booth on the boardwalk, using a wagon with a thatched roof built with the help of Edizen’s dad. Alex described their “very primitive technology” of the time: a 2.0 megapixel Kodak camera tethered into a box TV and photo printer, all powered by a deep-cycle marine battery with a power inverter.

“We strung all this together, so we’re out there sliding $5 photo keychains and $10 frames on the boardwalk,” Alex said. “We’re doing it every day and we’re consistent enough to where [eventually] we don’t need jobs anymore.”

Although neither has any formal photography training, Edizen took a photography class at Santa Monica College (she has a business degree from Canadian university)and said she went to “YouTube University” to learn more photo techniques. Alexsaid he learned “under fire.”

With Alex as the lead photographer and Edizen working as a technician, they sold keychains, frames and calendars. 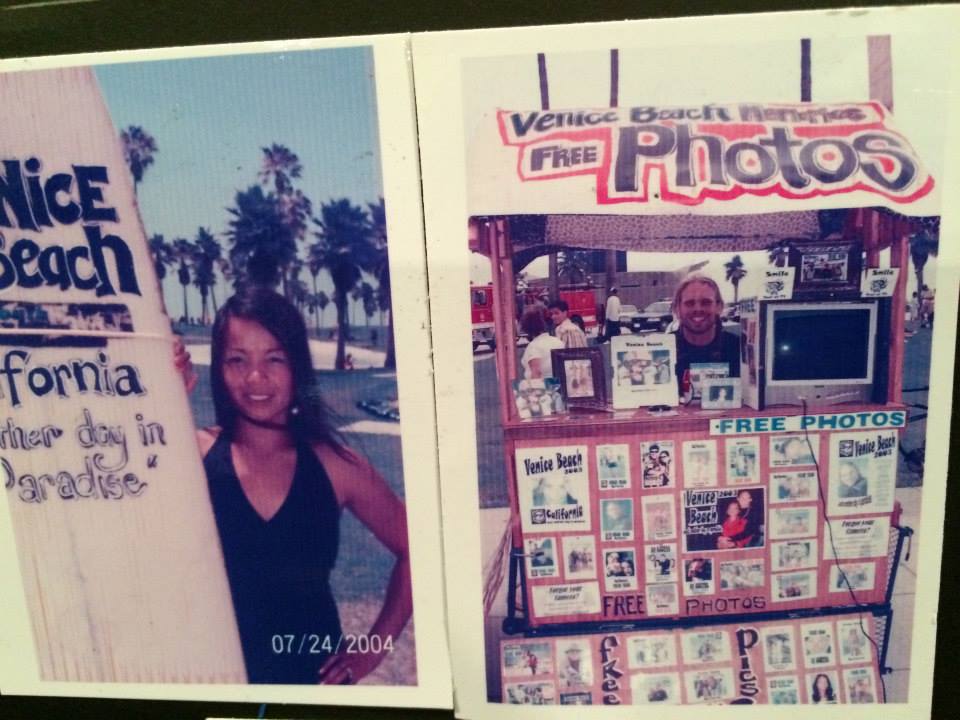 2003 Photo booth on the Venice Boardwalk

“People would walk by we’d take a photo and then point to the screen,” Edizen said. “So you get to see yourself on the screen. People got intrigued by that. You get the happy people that were happy to see their children but then you get that energy where it’s just like, ‘Why the f*ck you take my photo?’ That’s when ‘paparazzi’ came around because I’d peek my head out from the tent and say, ‘Paparazzi’ and then they’d calm down, the energy would calm. So, that’s Venice Paparazzi.”

“I’m answering the telephone,” Edizen recalled. “People are asking me the same questions: How do I get a vendor’s permit on the Venice boardwalk? How can I perform on the boardwalk? Where are the bathrooms? And I’m just like, ‘Oh my god, I’m on repeat mode every morning.’” 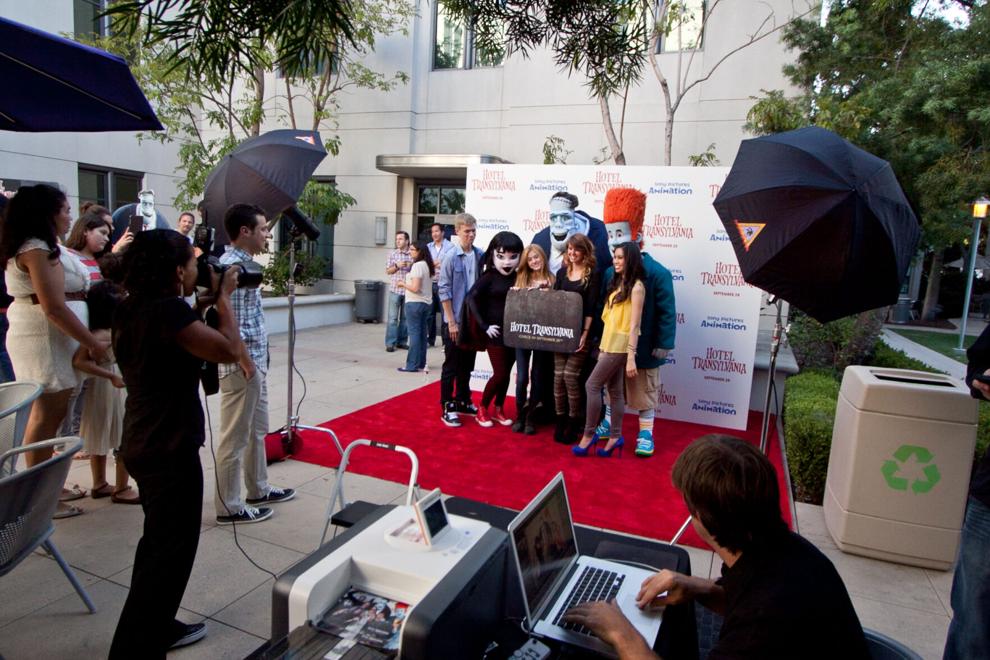 Thus, Visit Venice CA was born to inform visitors about basic FAQs and information on dining, hotels and events.

As their photo agency and associated work expanded, Venice Paparazzi began to get repeat clients as word of mouth spread.

“People remember when you do good work,” Edizen said.

With over 1500 events booked, Venice Paparazzi has photographed the Boys & Girls Club fundraising gala since 2007, and when one of their board members left to join the Anschutz Entertainment Group, he offered Edizen and Alex additional work. They became the official photographers of the Abbot Kinney Festival, whose namesake shares a birthday with Edizen—November 16th, in addition to capturing events for local parks.

As their photo agency grew, Edizen and Alex continued with their physical fitness pursuits, such as jujitsu—Edizen has a blue belt in jujitsu with one stripe and Alex has a purple belt with one stripe—and began training others. Alex had met Pavel Tsatsouline, a Russian trainer who popularized kettlebells in the West, around the time he met Edizen. Alex and Edizen started training people in kettlebell boxing in their garage and building rooftop.

They soon had so many fitness clients they had to turn people away. Along with their busy photography schedule, they reassessed how they spent their time. 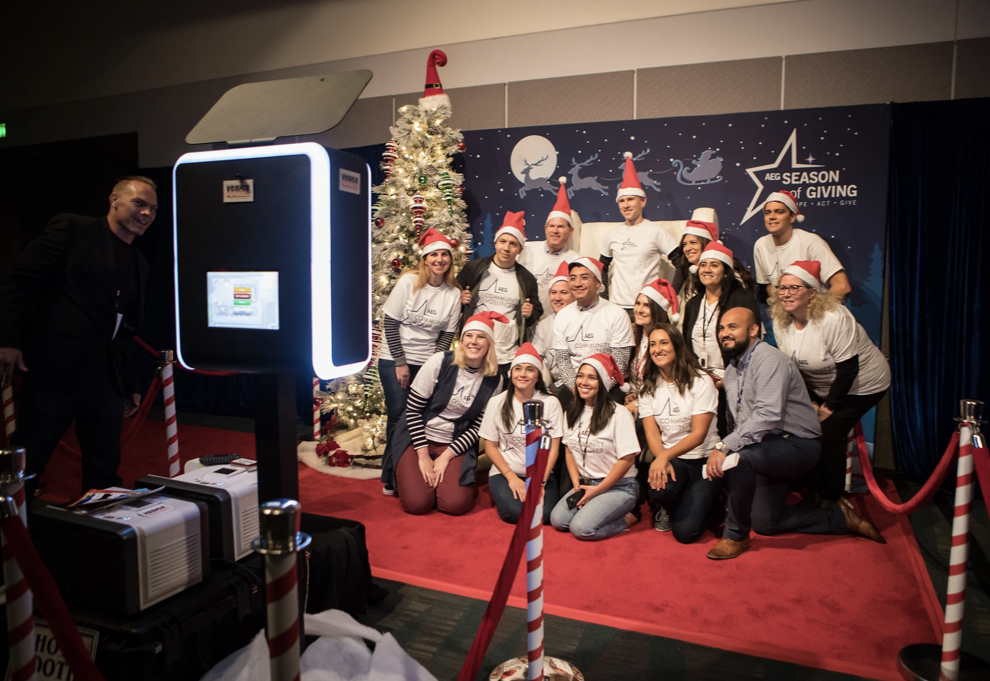 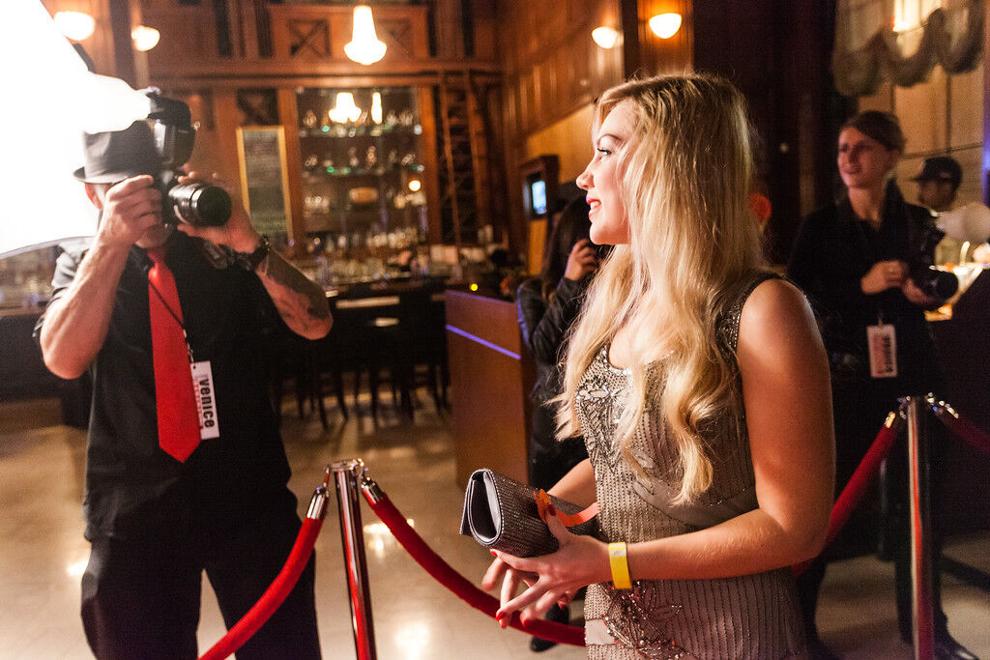 “We asked, ‘What’s the end state?’ That’s the real question,” Alex said. “What do we want? How do we want to live?” They realized the photo agency is more lucrative, so they gradually wound down their training business.

“That frees us up to train,” Alex said. “So we made these decisions and got free.”

By the end of 2019, Venice Paparazzi was as busy as they’d ever been. Shooting 23 events over 19 days in December, Alex said they had multiple locations with staggered start times.

Venice Paparazzi hit 2020 looking at the big picture: they reconnected with clients, rebranded their websites, designed a destination magazine for Venice.

“I just remember feeling like ‘Look at all the stuff we’ve accomplished’” said Edizen, “then COVID hit, and you have to change the way you think and your attitude and perspective to find the goodness in the chaos.”

Even though COVID “destroyed” their business for a while, Edizen said it gave them time to reflect. With their dogs,Smithers and Wellington, Edizen and Alex went to the beach in the morning for a quick swim and then practiced jujitsu or did hot yoga. Then, work started at 1 p.m.

“That’s really what our ideal day is,” Edizen said, “to be able to do whatever we want and then work.”

They’ve been active in civic life, as Venice Chamber of Commerce members and with Edizen previously on their board and Alex as the active tourism chair, without being overtly political.

“One thing about Venice Paparazzi is we try to stay out of the mix politically because everyone needs photographers,” Alex said, despite admitting strong opinions on local issues which he said would take “several stories” to document. “It’s an exercise in diplomacy. We try to keep it positive.”

Chaos on the boardwalk during the peaks of COVID, however, compelled Alex to get more politically involved. Friends of Venice Boardwalk, a pro bono group that states its purpose is to provide “leadership and resources to bridge the services gap,” asked Alex to join.

“Something needed to be done to clean up the boardwalk,” Alex said. “You had 400 people living out here—it was the wild west, man. It was a no-man’s land, a terrible look.” 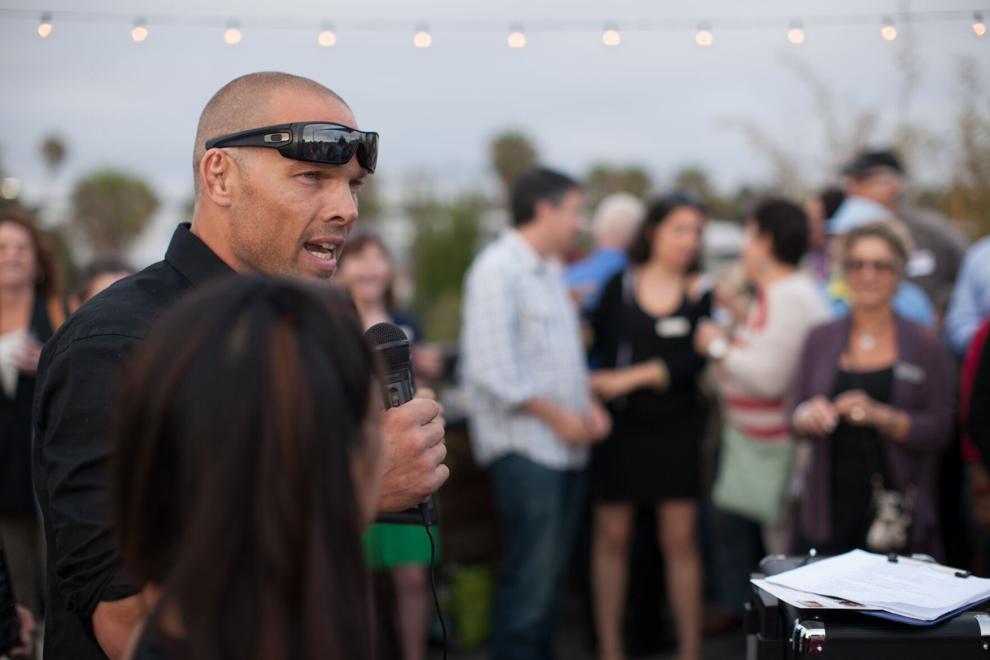 Alex helped recruit members in group solidarity to create an organization that said “we can’t be ignored” by city and county officials. They divided the boardwalk into triage zones to see what was needed to clear it out and clean it up. Alex also created Team Venice Beach, “an alliance of groups and individuals…to create a unified voice for the people that use the park.” After reopening cleaned facilities such as the racquetball court and the Muscle Beach Gym and Sand Box, they hosted the first Venice Beach Summer Sports Day on August 21, 2021.

“It was huge,” Alex said of the 20+-event day, “a very positive thing for the community.”

“It was like a ‘Welcome back to the park’ day,” Edizen said.

Now called the Venice Beach Olympics, the next full day of sports and recreation will be June 25, 2023.

Even as they recovered from a pandemic-caused downturn in business, another wrench was thrown in the works of the life they’d worked hard to build. This summer, a medical issue stunned the “forever young” couple: Edizen’s cancer diagnosis. After her hysterectomy, an early September follow-up showed no spread of the disease, and she’s completed five weeks of chemo radiation and IV treatments, with a follow-up visit next week.

As she enters the next phase of her life, Edizen wants to continue her jujitsu practice and start a self-defense class for women. 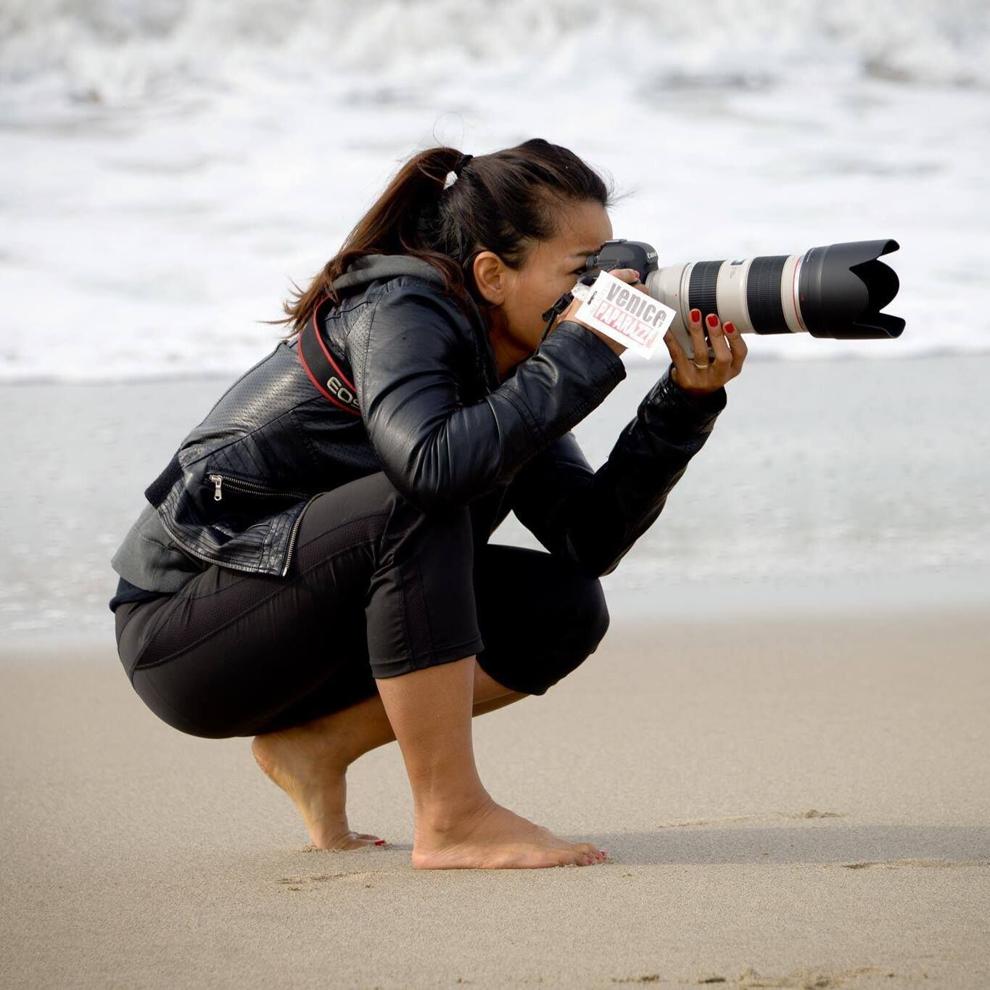 Alex also continues to play music, playing guitar and singing for metal band Warseed, in addition to Too Dirty, a revival of his previous band in Hollywood, Dirty.

On a recent rainy Friday night, Venice Paparazzi had a booth set up at Burton Chace park for an 80s-themed dance party. As two assistants worked the camera, Alex and Edizen helped people pick from ample props such as giant inflatable cell phones and fake boomboxes.

“Go rock star for us,” Edizen said, as a group of kids crowded in front of the green screen. “Three seconds…looking good!” The camera flashed. “You’re killing it!” she said, as Kenny Loggins’ “Footloose” pounded in the background.

Alex said, in addition to other events at the park, they’ve got “plenty of work” lined up (the Ovation Hollywood Oktoberfest, the Viper Room) and their December bookings are filling up fast.

“It’s picking back up,” Alex said. “We have a ton of work coming up, which is very cool.”

Always optimistic, Edizen said she is grateful and proud of the hard work they both put in to building the work-life balance they want in Venice.

“We still love what we do, right?” she asked Alex.

Partner up with Alex and Edizen in 2023!

Promote your business or event on VenicePaparazzi.com or VisitVeniceCa.com.  Contact Alex for advertising rates.

Need photographers or a photo booth for your 2023 event!  Hire Venice Paparazzi. View our list of services on HireVP.com