Check out the Beer Guide to Venice!

By VP’s Alex Stowell
.
Who wants a brew?  You do, and me too!  And, we are in luck!  There are a ton of taps in this town that pour all sorts of sudsy goodness.
.
Let’s have a look, shall we!   Moving from the south (the Marina)  to the north end of the Venice boardwalk we will stop off at the seven best places to get an ice old beer in Venice.
.
Tony P’s Dockside Grill is beer heaven.  They have 40 beers on draft and another 70 in bottles and cans.  They offer hop head flights, Belgian flights and even have Peanut Butter Milk Stout on draft with nitrogen.  There is something here for everyone and the Tavern has a cool relaxed vibe, great food and every sports happening imaginable.  If you have not been to Tony P’s, you should go!
Brennan’s
17 taps of ice cold sudsy goodness at this iconic neighborhood Irish pub. And they have pool, games, a giant  outdoor patio complete with a bean bag toss, turtle races and live music to go with your beer!  Marvelous!
–
Simmzy’s is RAD!  They bring 26 taps of A game beer, including their own signature line brewed in Burbank! They really know the craft, rotating their handles with the best  of the best of So. Cal breweries.  Stack that with fantastic food, a  ripping happy hour, and monthly tap take overs, and your have the essence of this favorite local, steps from the sand spot.
Sunny Spot  has $5 Stone IPA’a on Happy Hour from 3;30 to 6:30 M-F, and 11:00 p.m. – close on the weekends, and that is a fantastic to go right there!  As well, their draft selection includes such legends as Beechwood Brewing Citradelic IPA, and Port Brewing Imperial Stout.  Chill out on their breezy patio, eat fantastic food, while sipping world class brew!  MMMMMM  Good!
.
Canal Club has a it going on in the beer department!  They rotate their handles regularly, with Dog Town Duck, brewed by their very own John Binder of Venice Duck Brewery, being a mainstay.  And, they have a huge selection of bottles and cans, Ballast Point Sculpin, Firestone Walker and Fat Tire to name a few.  Get down there at 5:00 p.m for their 7 day a week happy hour and pair your brew with some of their legendary cuisine!
. 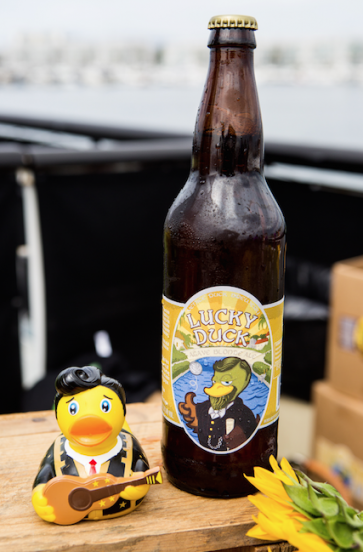 James Beach has a whole lot of beer goodness, Dog Town Duck, Stone IPA and Ballast Point Grapefruit Sculpin on draft to name three.  But there is way more!  22 oz. Arrogant Bastards and Santa Monica XPA are just the tip of the iceberg.  Get down there and see for yourself!  As well, this place goes off at night!  Want to skip the line outside to get in?  Go across the street and buy a drink at the Canal Club and get a wrist band that let’s you skip the line.
–
Barlo Kitchen and Cocktail/High Rooftop Lounge:  These places, housed in Hotel Erwin, are great.  As an environmentally forward businesses, they strive to have locally produced items on their menus.  This means a whole lot of California beer.  And, everyone knows Californians make the best beer there is.  They have Three Weavers Expat IPA, and Ole Rasputin, to name a few. And, you can chill at the street level in Barlo or crack your brew 7 stories above the ocean at High rooftop lounge.
–
The Sidewalk Cafe – 13 taps, with my choice being L.A. based Golden Road Brewery’s Point The Way IPA. As well, they have a full bar and a super deep menu.   And, if you did not know, they have $5 all you can eat tacos on Tues., and one of the best boardwalk people watching patios around.
–
Worth mentioning!!
–
If you like Mexican beer, check out Cabo Cantina on Washington Square.  They have every brew made south of the border, and during happy hour they are all two for one.
–
If you like Japanese beer, check out Hama Sushi on Windward Circle.  They have a wide selection of brew from the land of the rising sun on draft and in bottles.
–
Thank you for reading, now go get yourself a beer!
–