Check out what other musicians say about Venice!

“Venice is the best vocal group in America right now. I love all kinds of harmony. But I particularly love theirs, because it’s so natural. It’s not like anybody else’s. This is my favorite band in the world.” — David Crosby

“Venice, one of my favorite bands, is quintessentially Californian, with soaring harmonies. They sing and play their asses off. I’ve seen them knock out many unsuspecting crowds, taking the audiences, who had not come to see them, completely by surprise. It’s such a pleasure to play with these guys, because they have that power.” — Jackson Browne

Americana-Pop quartet, Venice is a band of brothers from Venice, CA. The band consists of two sets of brothers, Mark and Michael Lennon and their cousins, Kipp and Pat Lennon who have been performing together since the 1980’s and singing all of their lives. They have recorded and toured around the world performing for a loyal, devoted fan base with a deep catalog of rich songs from over 20 albums. Venice’s trademarks are their harmonies, personal lyrics and high energy, communal shows which garner them ovations and encores at virtually every performance they’ve given, from intimate theaters to sprawling festivals, across the US as well as in Europe. Their hardworking career over time has earned them major record releases on Sony Music, Universal Music, Atlantic Records and Vanguard Records.

In the summer of 2018, Venice began working on songs for what would eventually become their new album, Jacaranda Street, produced by the bands own, Michael Lennon, and releasing on April 12, 2019. The experience of creating new music is something they always look forward to, but they had no idea this project would turn into such an emotionally and musically fulfilling album. “We got together in July with a few ideas we had recorded or jotted down over the last couple of years,” says guitarist/vocalist Michael Lennon.  When writing Jacaranda Street, they created a bare bones version of the band’s usual set up in Mark’s living room which is the same house that Mark and Michael grew up in, in Venice, CA – a small drum kit, guitars, keyboards, and a few microphones. With windows open for the Southern California summer breezes, (you can even hear wind chimes on a few of the tracks), they started writing and immediately were ready to demo the songs that were written in that laid-back atmosphere. Their Dutch drummer, André Kemp, who had been touring with the band in Europe, flew out to LA for a few weeks to co-write songs with them along with long-time Venice bassist, Mark Harris.

For over fifteen years, Venice has enjoyed a great level of success in Europe, where their harmonies and musicality are considered a modern extension of what many Europeans call “West Coast Music.”   Their music reflects many of their influences while growing up in the small, eclectic and culturally diverse beach town for which they are named. Venice’s sound is familiar and fresh, combining their classic rock and folk influences in harmonies influenced by The Beach Boys, Eagles and CSN. Many of their other influences are also evident on Jacaranda Street, from their shared love of artists spanning many eras; from Steely Dan, Joni Mitchell, Paul Simon to artists like Rufus Wainwright and John Mayer.

The new album consists of songs about their family histories, themes of romance, renewal, love and loss, and songs exploring the experiences of moving forward and looking back. Over the years, Venice has made their mark with their distinctive vocal sound and harmonies. As a group or as individuals, they have performed and/or recorded with some of the biggest names in the music industry, including Bruce Springsteen, Michael Jackson, David Crosby, Stevie Nicks, Bon Jovi, Jackson Browne, Brian Wilson, Cher, Don Henley, Elton John, Michael McDonald, Phil Collins, Ozzy Osborne, Billy Idol, Rick Springfield, America, Heart, and the list goes on.

The Lennons spent most of 2010-2013 as backing vocalists performing in the 219 show, record-breaking worldwide arena and stadium tour of “Roger Waters’ The Wall” (Pink Floyd). Venice was invited to join such artists as Bruce Springsteen, Bonnie Raitt, Don Henley, Ben Harper and Lyle Lovett in contributing a track to the 2014 compilation album, Looking Into You: A Tribute To Jackson Browne. The Venice hybrid of folk/rock/soul is relevant, alive and still growing, with many fans worldwide considering them the torchbearers of the Southern California sound.

With Jacaranda Street, they have raised the bar yet again with a beautifully conceived and executed artistic step along that California road. Roll down the window and feel the breeze. Jacaranda Street will have its worldwide release on April 12, 2019, on Lennon Records & M.A.R.S. Label Group USA.

An interview with Michael Lennon:

I play guitar, keys, bass, drums and other instruments, sing, manage the band, book the shows, produce the albums, engineer the albums.

I’ve been a musician for 55 years. I started when I was 5. My dad and his brothers had a vocal group called the Lennon Brothers in the 50’s. My cousins are the Lennon Sisters from the Lawrence Welk show and they were on TV in the 60-s and 70’s and still perform to this day. But my older brother was my biggest influence….he had a rock band in the 60’s that used to practice in the garage of our Lennon family home in Venice. I started on drums and moved to guitar at 14 years old. I later studied music in college where I learned piano and arranging.

My brother Mark and I grew up in a musical family of 13 children and our cousins Kipp and Pat who are in the band have 11 in their family. Being on the lower end of the family we grew up listening to all the music of our parents generation, and the music of our older brothers and sisters….in the 60’s and 70’s. The Beatles were one off the biggest influences of actually wanting to have a band one day and write songs….but all the other music of those times, filled our hearts and souls and is the basis for our sound and vibe.

Last summer we wrote and recorded our 22nd album in the home Mark and I grew up in, in Venice, CA. That album, Jacaranda Street, will be released April 12, 2019.

Although we’ve loaned our vocal talents to many projects of some of the biggest names in Rock, we’ve only had one band, VENICE!   We have a pretty extensive catalogue of CD’s, DVD’s and songs we’ve written over the years. All can be seen and heard on our website: VeniceTheBand.com

Photo courtesy of the VeniceTheBand.com

Playing the main stage at the Pink Pop festival in Holland to 25,000 people was pretty amazing. And in contrast to that, one of our favorites was a poorly planned show in a Colorado cowboy bar with only 4 people in it and one of them was an elder lady with no teeth, saying, “I’m old enough to be your mother.”   She was right… and we still laugh about that experience because after the show we got booked into a Motel in the scary part of town that was a heroin den.   Haha!

Find something else to do!   Haha! Stay true to yourself and your beliefs. Don’t change your music or your style to fit what others try to tell you it should be. It makes decisions in your career so much easier if you follow your heart and soul and not someone else’s vision of you or who you should be….and be nice along the way….so many people you work with along the way end up returning in one way or another to your life….make friends along the way, not enemies….and Good luck!

Music is the doctor of the soul!

Be kind to each other and protect our environment. We have one planet.   We can’t afford to destroy it.

Describe your perfect day in Venice:

Morning bike ride from Venice Blvd to the end of the speedway to waters edge in the Marina. Then to 27th Avenue, to spend the day on the sand, and in the water, with family and friends, then Hinano Burger (before i was vegan) and a beer for lunch, then home for a shower and off to Sushi at Hama or Kifunes for dinner. BAM!

List any of your favorite Venice businesses, event(s) or activities:

Who has the best Venice nightlife? Favorite places to watch live music?

I’m hoping they can reopen the Witzend on Lincoln Blvd. near palms.  Especially if they can make it a bit bigger to accommodate more people. Such a cool, local venue and vibe. Hama Sushi is always a fun vibe.

Playing the ceremony of the VENICE sign lighting on Pacific Ave.  Very proud to have helped raise the money to build it and play for the ceremony when they first lit it up! 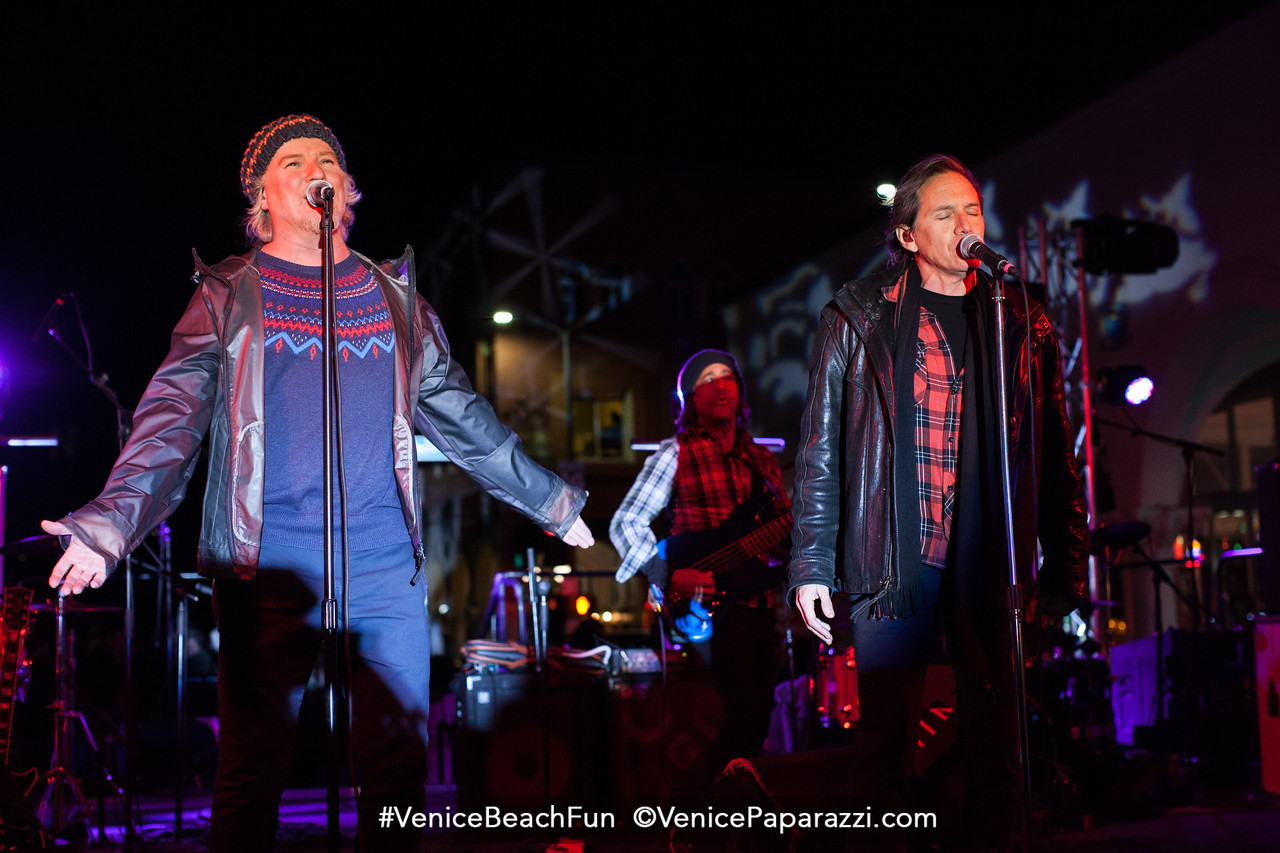 Any shoutouts or thank you’s?

Venice Paparazzi for helping to promote and educate the world about our beautiful beachside town, VENICE.

Our Lennon family has been in the city of Venice for over 100 years!  I cannot think of a groovier place I’d rather hail from. Venice forever!

HOW CAN ONE FIND YOU?