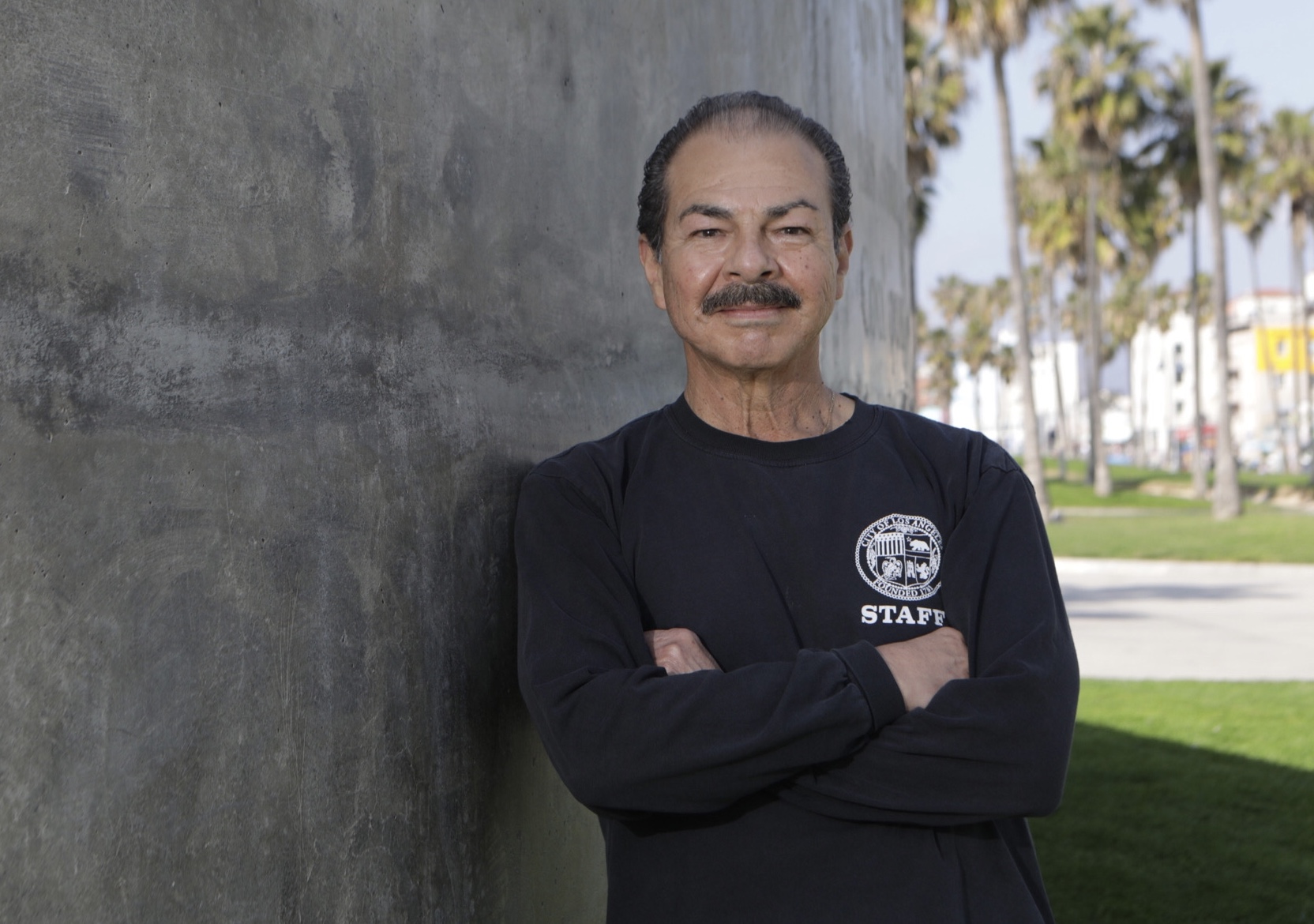 Article by Venice Reporter Alex Stowell.  Photos by Venice Paparazzi’s Edizen Stowell
.
Wednesday Feb. 10 2021 marked the end of an era at the Venice Beach Recreation Center.  Victor Juaregui, Supervisor for 18 years, worked his last shift.  Yes, Victor has retired.   After 37 years with the City, and almost 2 decades here in Venice, Victor has hung up his name badge and is moving on.
.
The ceremony was an intimate event, complying with protocol, and Venice Paparazzi was on the scene to document the day. Under a beautiful blue sky a few staff gathered to say good bye for now and wish Victor well.  Alex from Venice Paparazzi presented Victor with Certificates of Recognition from the Autumn Burke and California State Assembly, Sheila Kuhl and the County of Los Angeles, and all the local businesses and volunteers that operate on and frequent Oceanfront Walk, as represented by the Venice Chamber of Commerce.  In addition, Venice Beach Rec. and Parks Superintendent  Robert Davis presented Victor with a Certificate of Commendation from the City of Los Angeles  and Mike Bonin of CD11, thanking him for years of stellar service and making note of the high esteem in which Victor is held.

Here are some photos from the day!

All photos by Venice Paparazzi 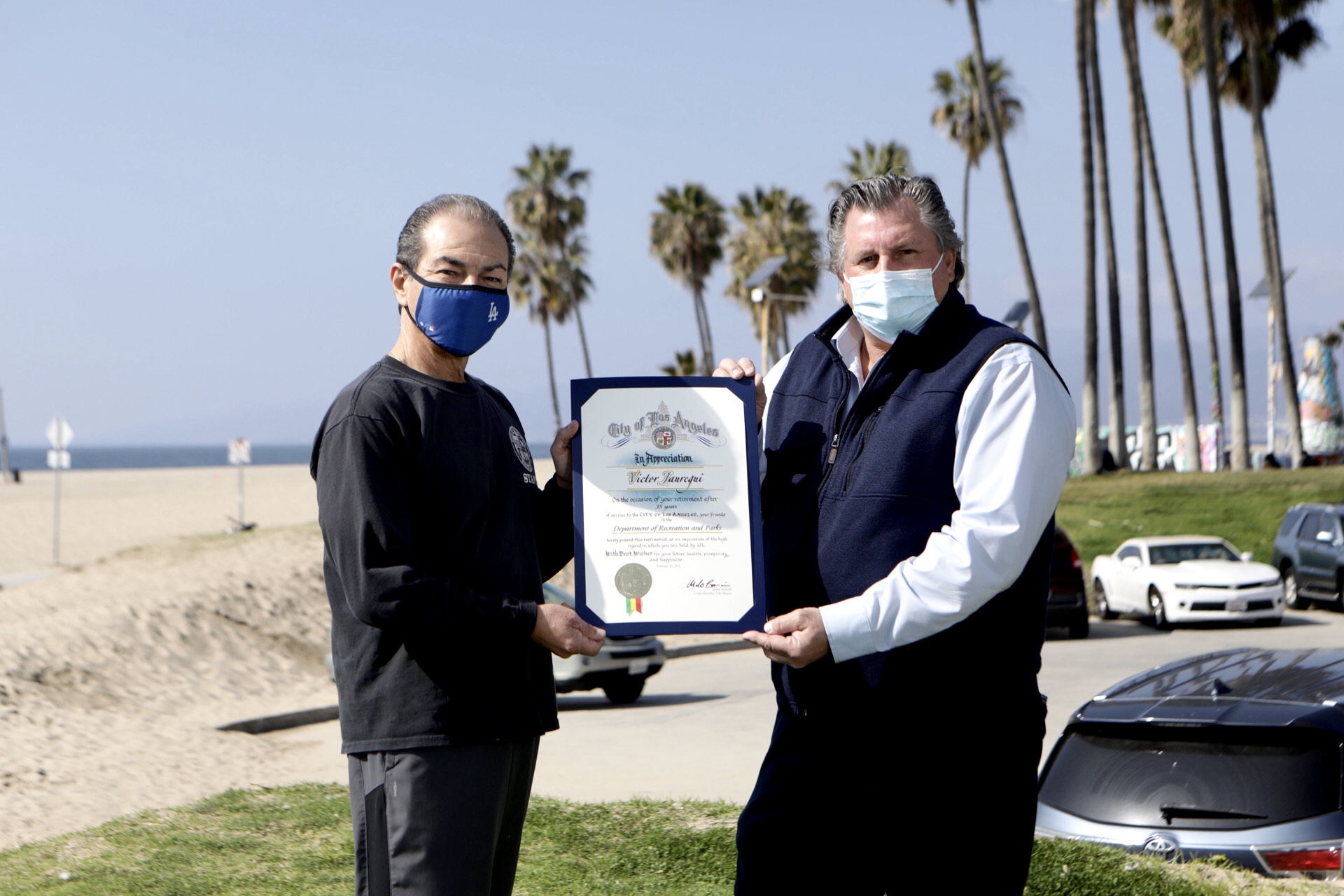 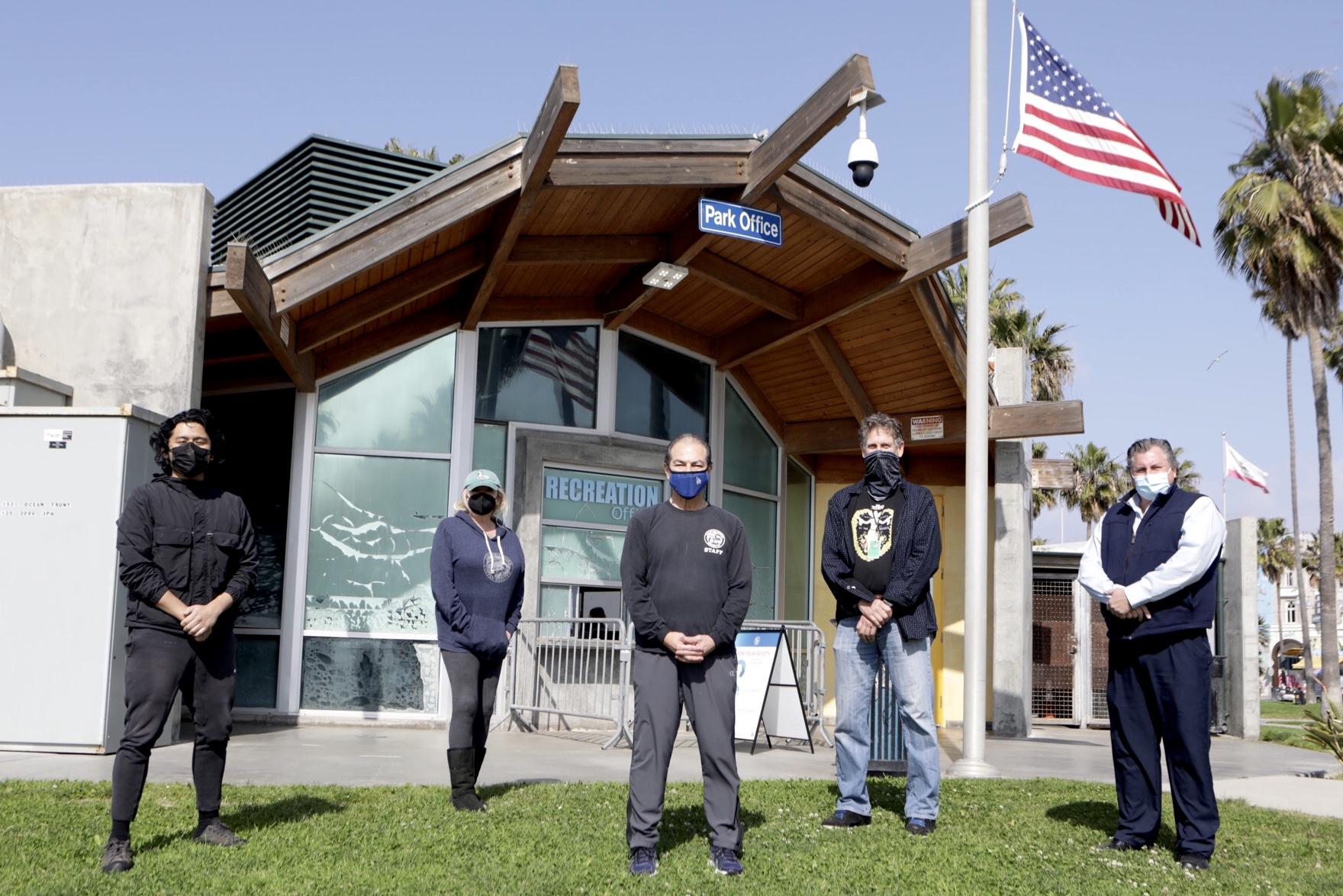 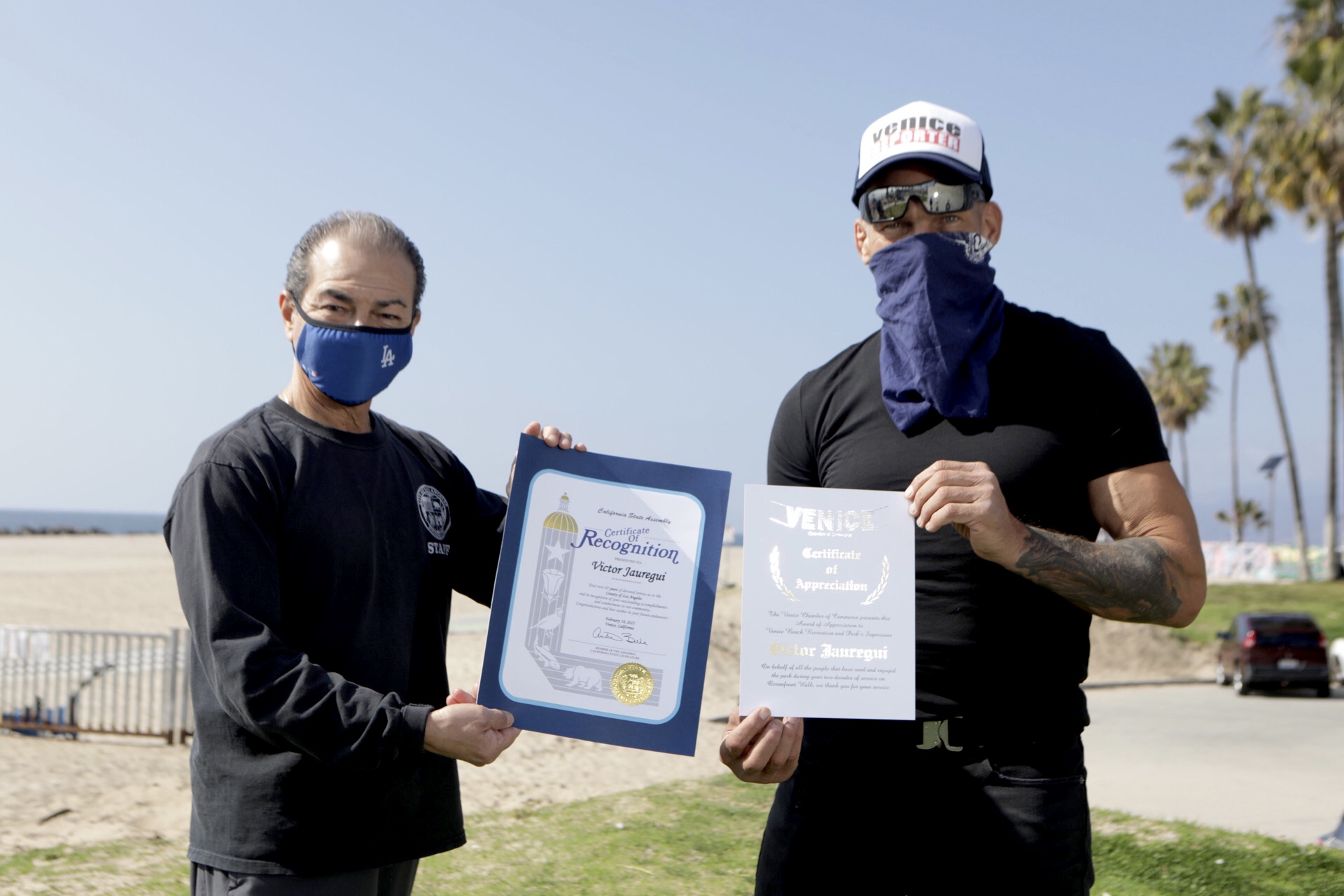 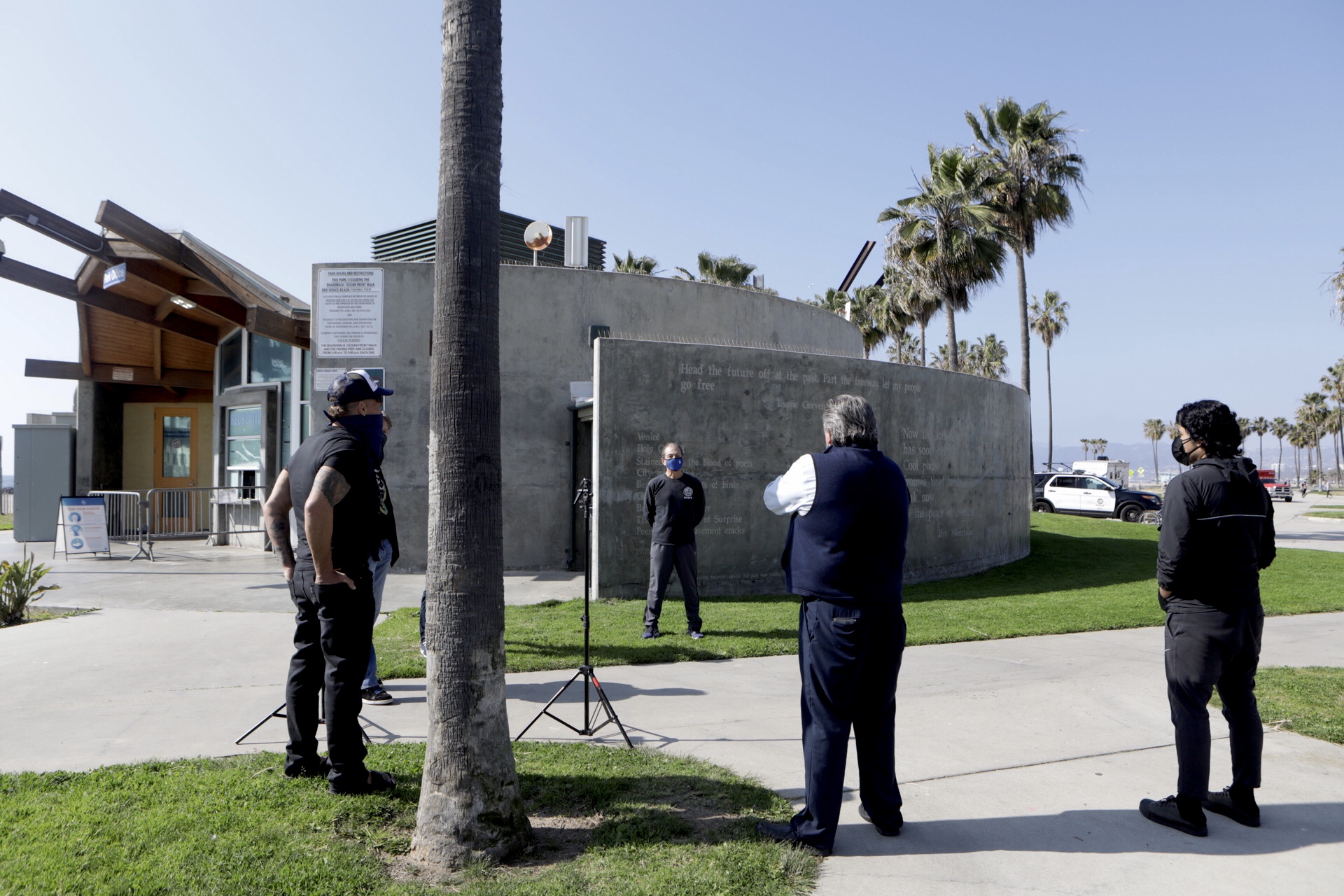 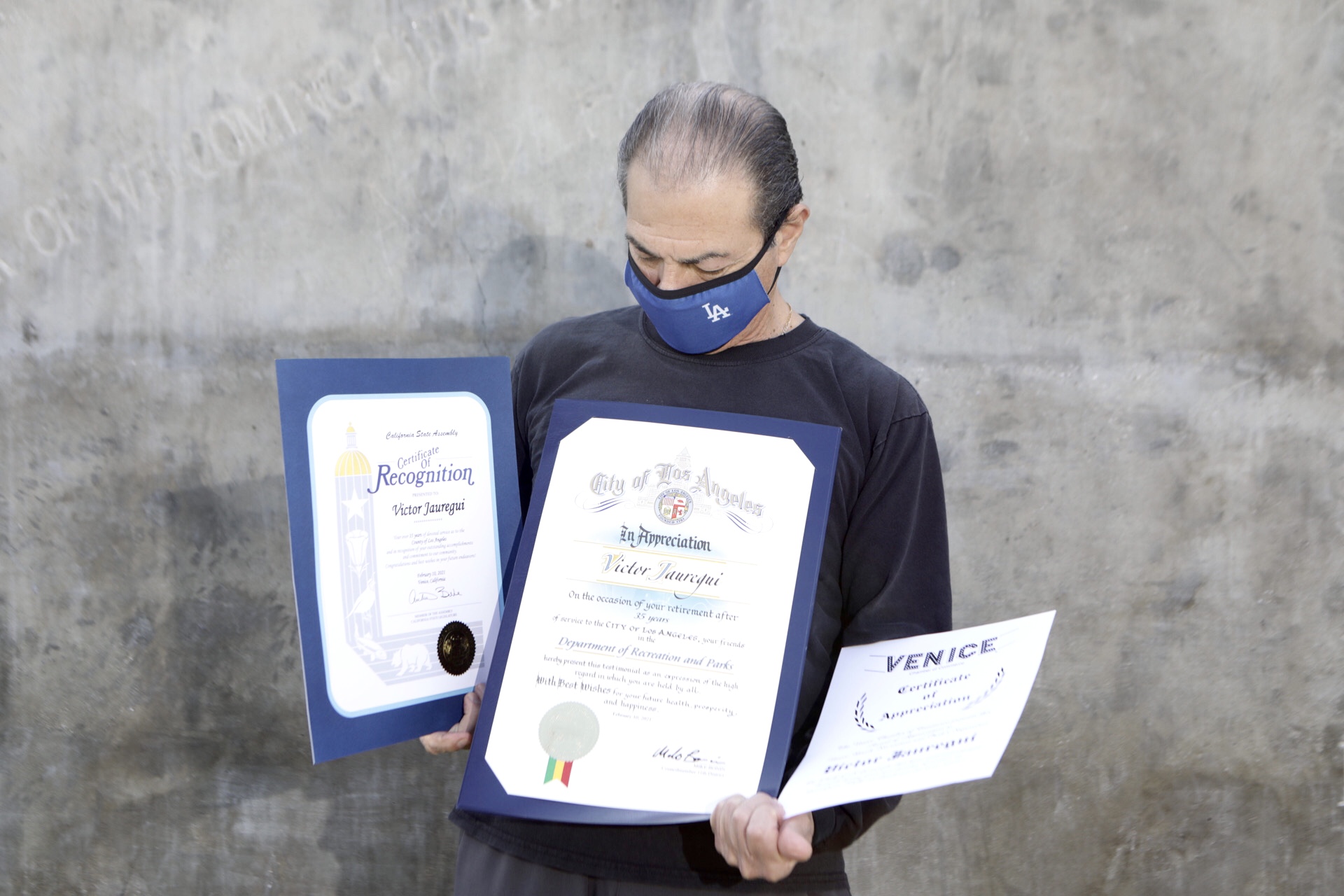 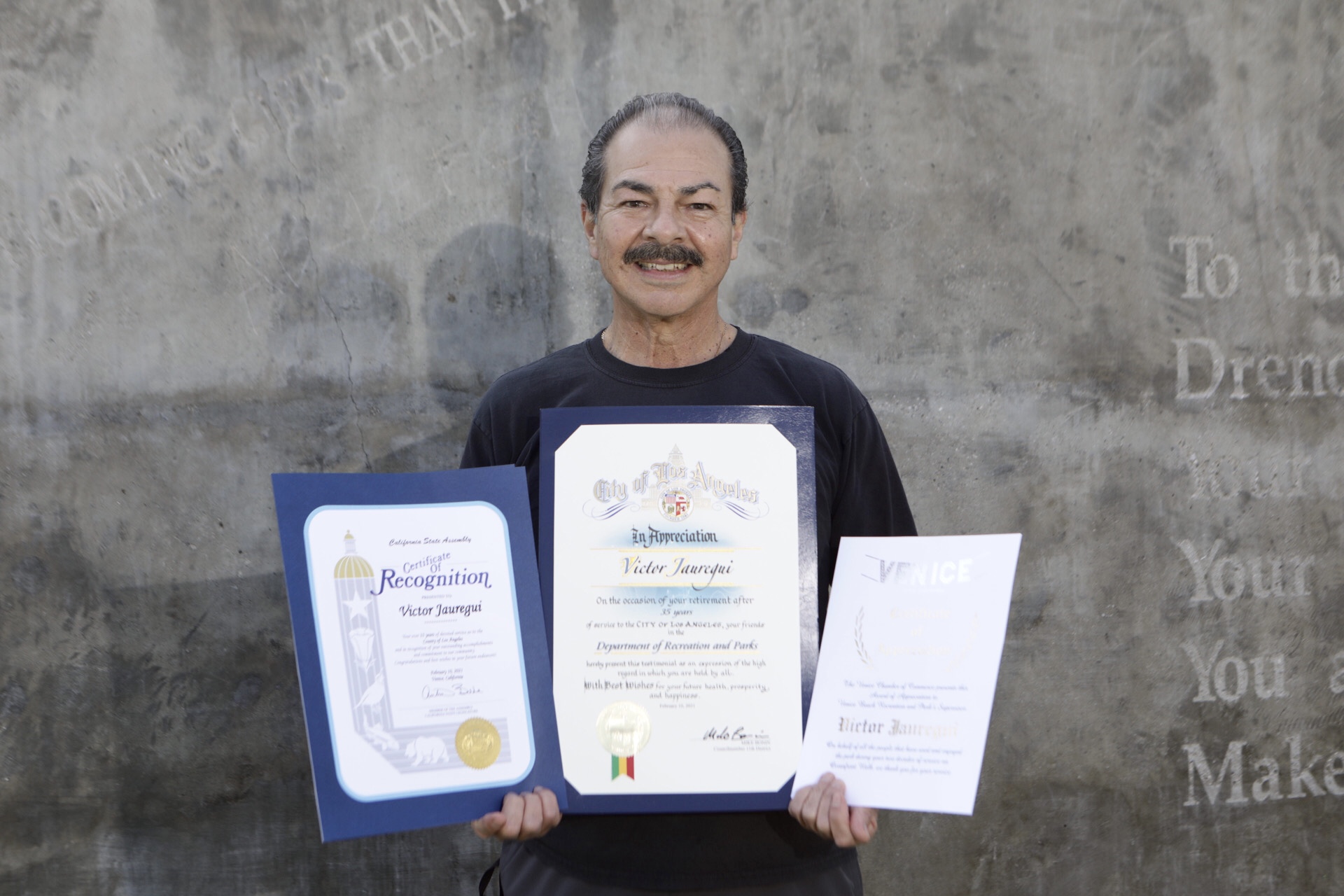 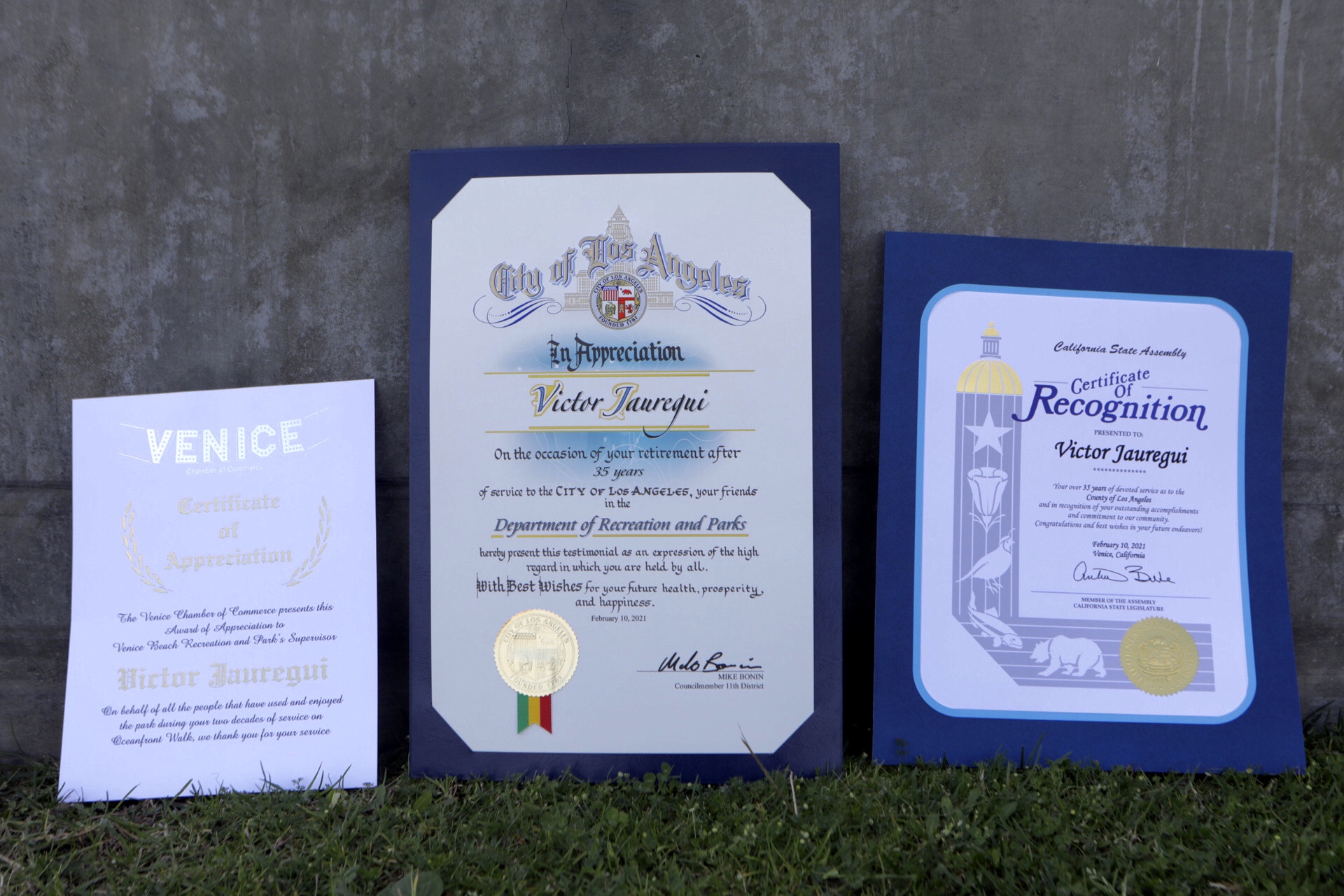 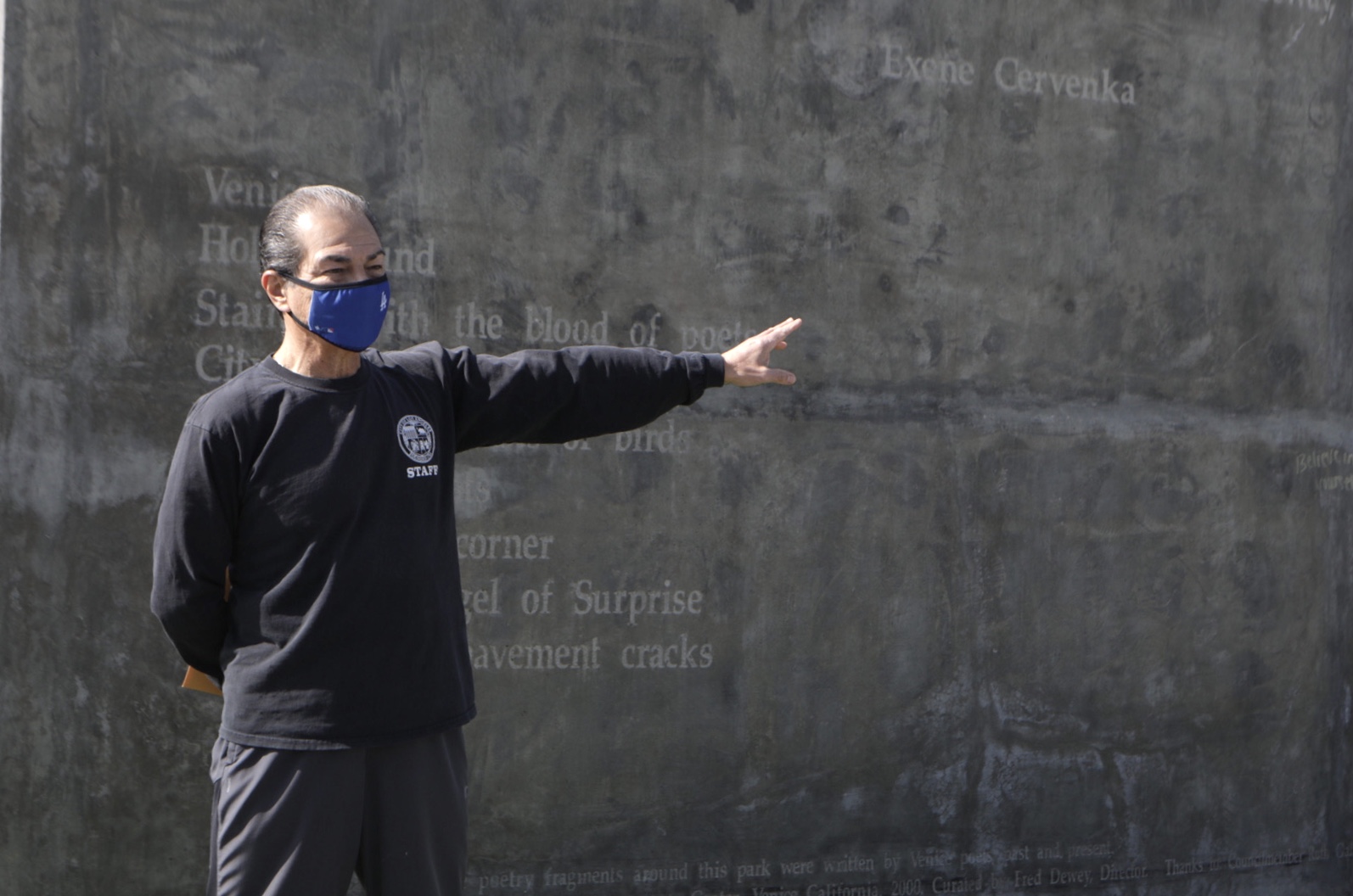 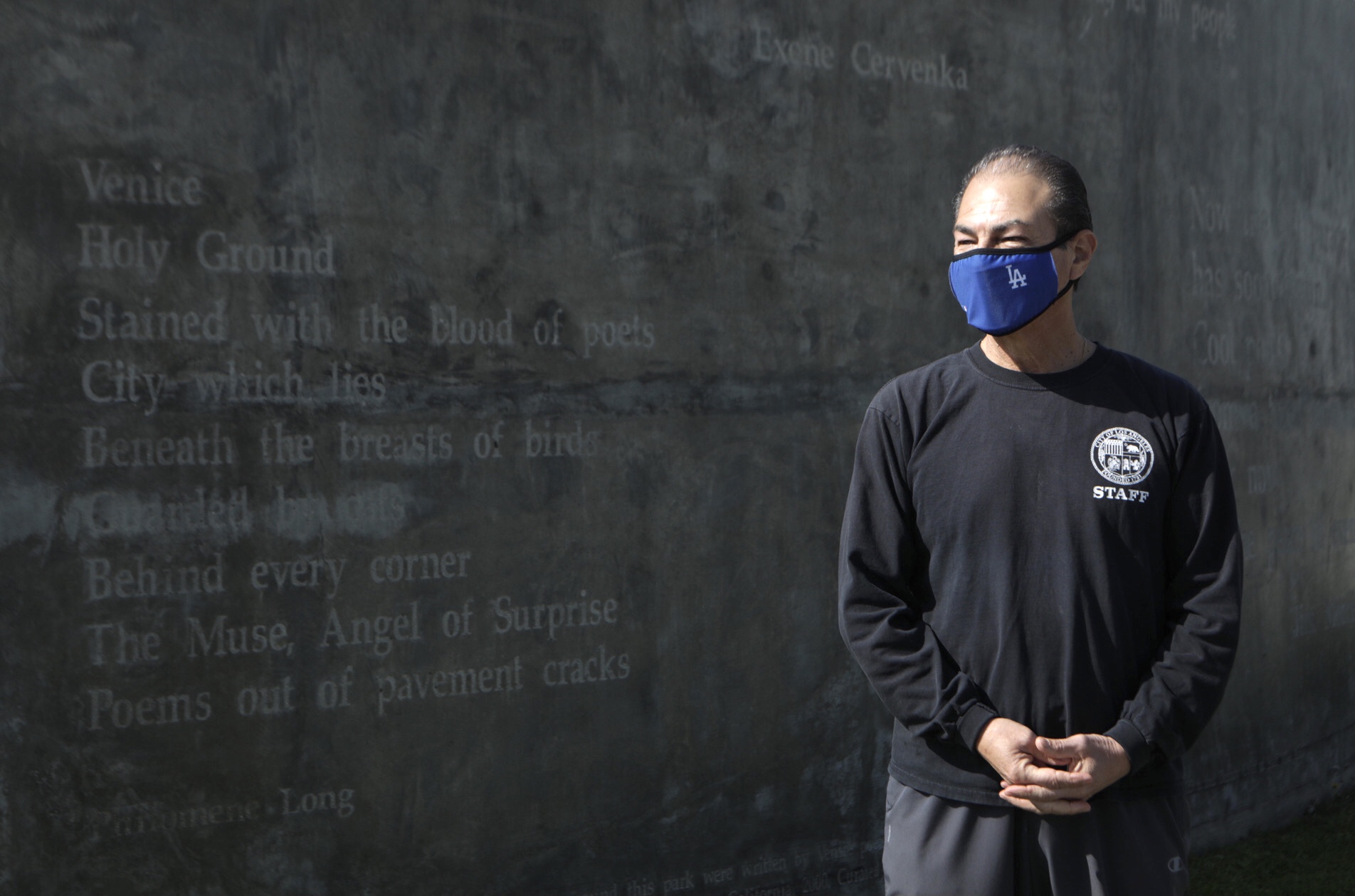 Here is a message from Robert Davis, the Supervisor of the Venice Beach Rec. and Parks:

With our sincerest and deepest appreciation, we Thank and Commend VICTOR JAUREGUI, JR. for his 37 years of dedicated and committed service to the City of Los Angeles, Department of Recreation and Parks and to the communities it serves. Mr. Jauregui began his career in 1984 and is retiring on February 13, 2021. Mr. Jauregui leaves City Service having worked nearly half his career in the position of Senior Recreation Director II at the Venice Beach Recreation Center for the past 18 years from 2003-2021.

One of Mr. Jauregui’s many accomplishments at Venice Beach was collaborating with Department of Recreation and Parks Management, the LAPD and the City Attorney’s Office on a comprehensive plan for the logistics, program rules, identification cards, equipment and staffing for the “Public Expression Permit” program implemented on the Venice Boardwalk/Ocean Front Walk vending spaces from 2005 through 2008.

Mr. Jauregui’s “best part of the job” was working with communities, families, volunteers and other agencies. He always strived to provide great events and programming and a safe place for all to come and enjoy during his 37 years as a Recreation professional. His greatest pride was to see the smiles on the children he served and to hear a simple “thank you” from their parents. As he characterized it, “It’s the best feeling ever.”

His other fond memories and those he will “cherish the most” are those he shared with all his co-workers throughout the years working on many special events, locally and city wide. He also remembers meeting many sports athletes & broadcasters, movie stars, and singers. As he said, the memories are the “Cherry on Top.” 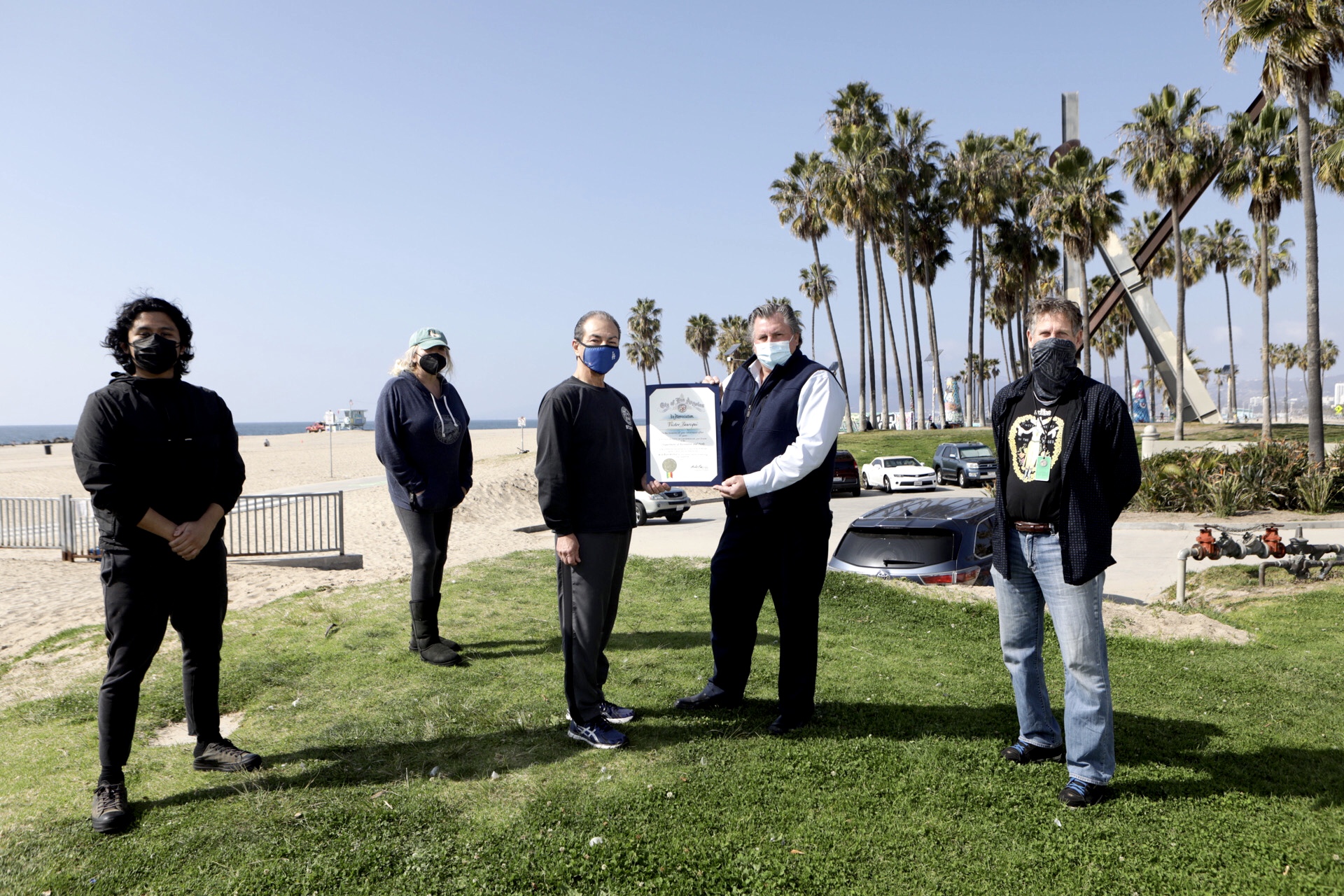 He is also very proud of his service working with families and communities in both economically challenged neighborhoods as well as some more affluent neighborhoods especially during some very tough times our City has faced during his career. He always felt that he was helping people “heal” during challenging times.

“Victor” says he always felt that Recreation & Parks was one big “Family” and that it is the best Department in the City to work for. He says that retiring from this “great job” is his saddest moment.

Here is what others had to say about Victor!

From Joe Wheatley, producer of the Muscle Beach Venice

As the Promoter of the Bodybuilding shows held each summer at the Venice Beach Rec. Center since 1999, I’ve had a great working relationship with Victor over the years. That also turned into a very valued friendship. So many memories and stories, I really wouldn’t know where to begin. Won’t be the same without him being there. He’ll be missed.

From the Pop Paddle Tennis:

Congratulations to Victor Jauregui from all the players throughout the years at the historic paddle tennis courts! We thank you for your dedicated service to Venice Recreations & Park and for helping to preserve our beloved sport. We wish you a very happy retirement and since you may have some extra time, why don’t you come and play some paddle with us?  Thank you again – The Pop Paddle Community

Victor:  We go back to 2003 when you started with Recreation and Parks and  I introduced myself to you and the Venice Beach Skate Dancers and continued to bug you about us for another 17 years. I thank you for always being considerate and always working things out with us.  It’s hard to say goodbye after 17 years, I am going to miss you.  Please take with you my gratitude, thanks and very best wishes for the absolute best retirement ever, you have earned it.”Congratulations Victor on your retirement as Director of Venice Beach for the City of Los Angeles Department of Recreation and Parks.  You have served the community well and the residents and visitors to the beach can be grateful for your hard work and leadership.

From Sandy Nonhof, President of the Venice Beach Park Advisory Board.

I enjoyed working with you as a member of the Park Advisory Board when the late Helen O’Neill served as chairman.  She urged me to be a part of the group supporting your great ideas and helping with events such as the Egg Hunt before Easter and with the toy drive for needy children and young people before Christmas.  We worked together as members of the Board of Directors of the Boys and Girls Club of Venice for many years also. After Helen’s death, I was elected the chairman.

The Muscle Beach events were successful also as you worked with Joe Wheatley who produced them during the weekends of Memorial Day and Labor Day along with the Fourth of July celebrations.  The events grew very large crowds and even new, spacious bleachers were added for all those attending.
I think my biggest joy was to see the new fencing installed for the paddle tennis courts.  Many of the players personally thanked me as the Board recommended the replacement of the fencing which was long overdue.
Enjoy your retirement!  When the covid19 is over and we all get some sense of normalcy, see friends, travel, takes trips to see more of California and enjoy time with your family. Come visit us on Whidbey Island, Washington.
Thank you for your service to everyone who has been to Venice Beach and to those who will continue to come and visit!”
Your friend,
Sandy Nonhof
.

Here are a few photos that we found of Victor in the Venice Paparazzi photo archives! 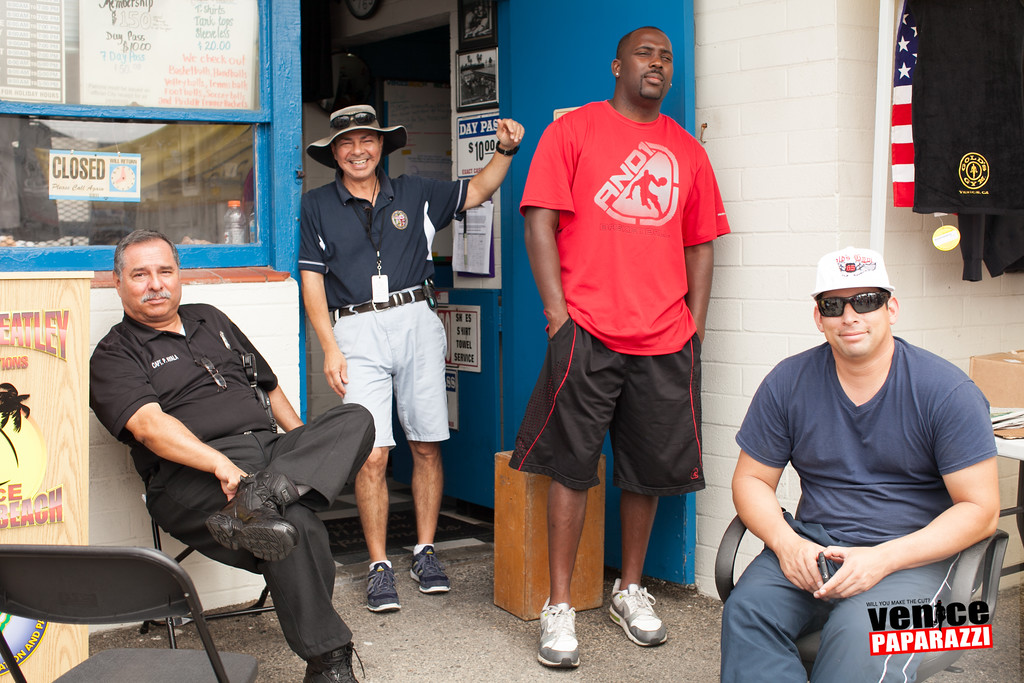 Victor with Austin and Mario.  Photo taken at  the 2008 or 2009  Muscle Beach Venice event 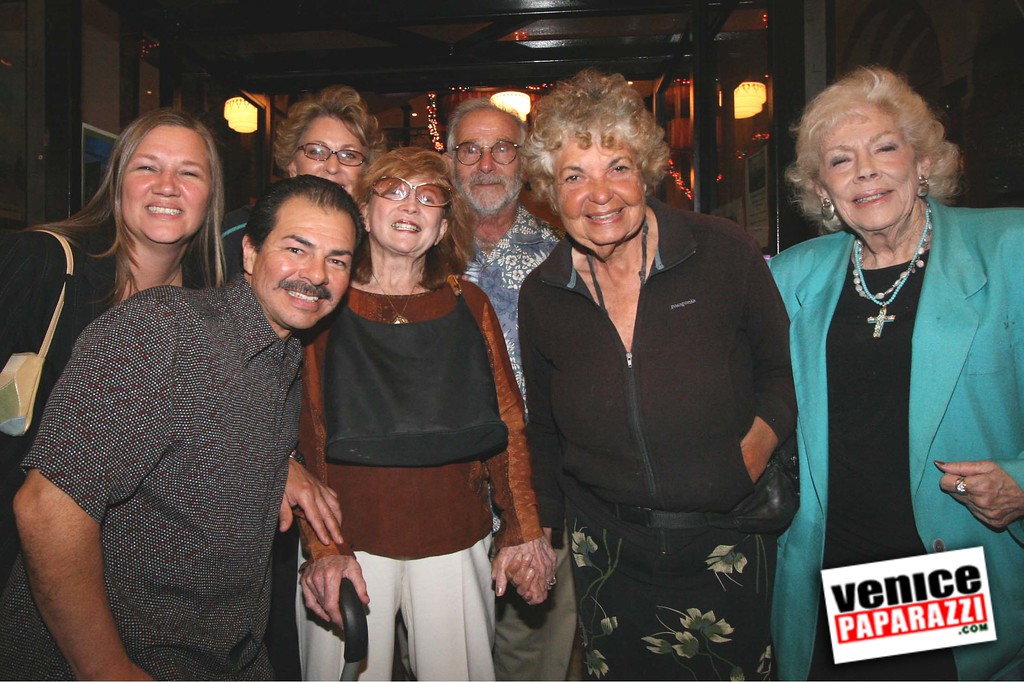 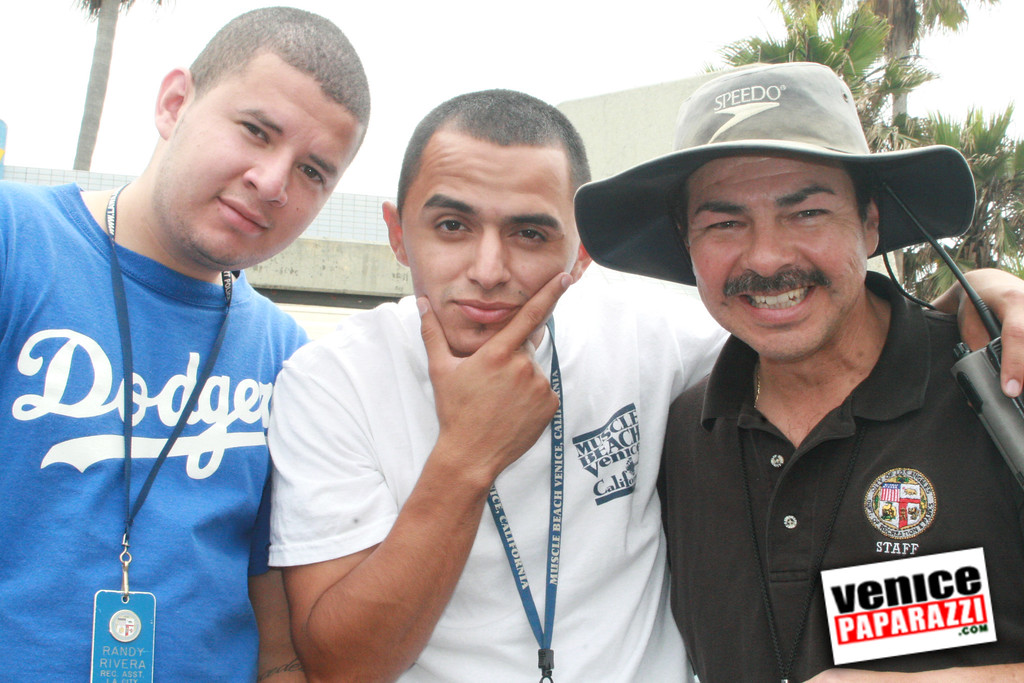 Victor with recreation assistants Randy and Chris in 2007 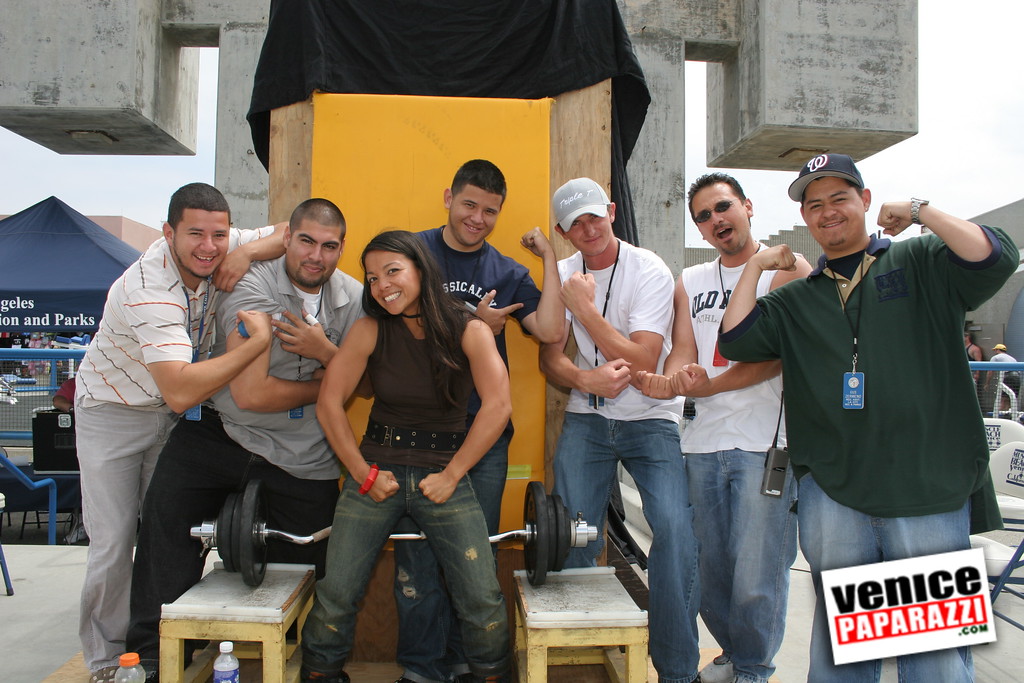 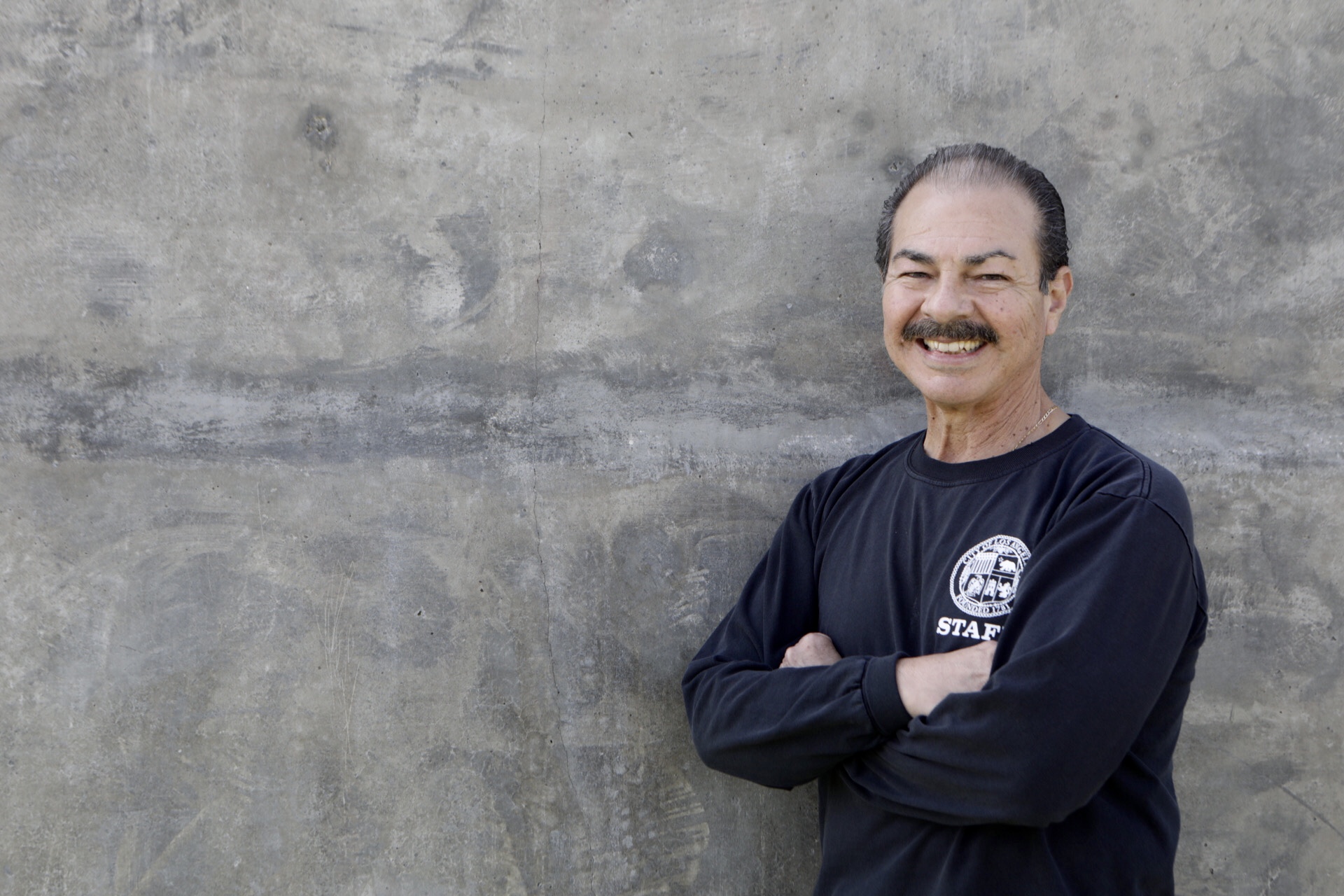