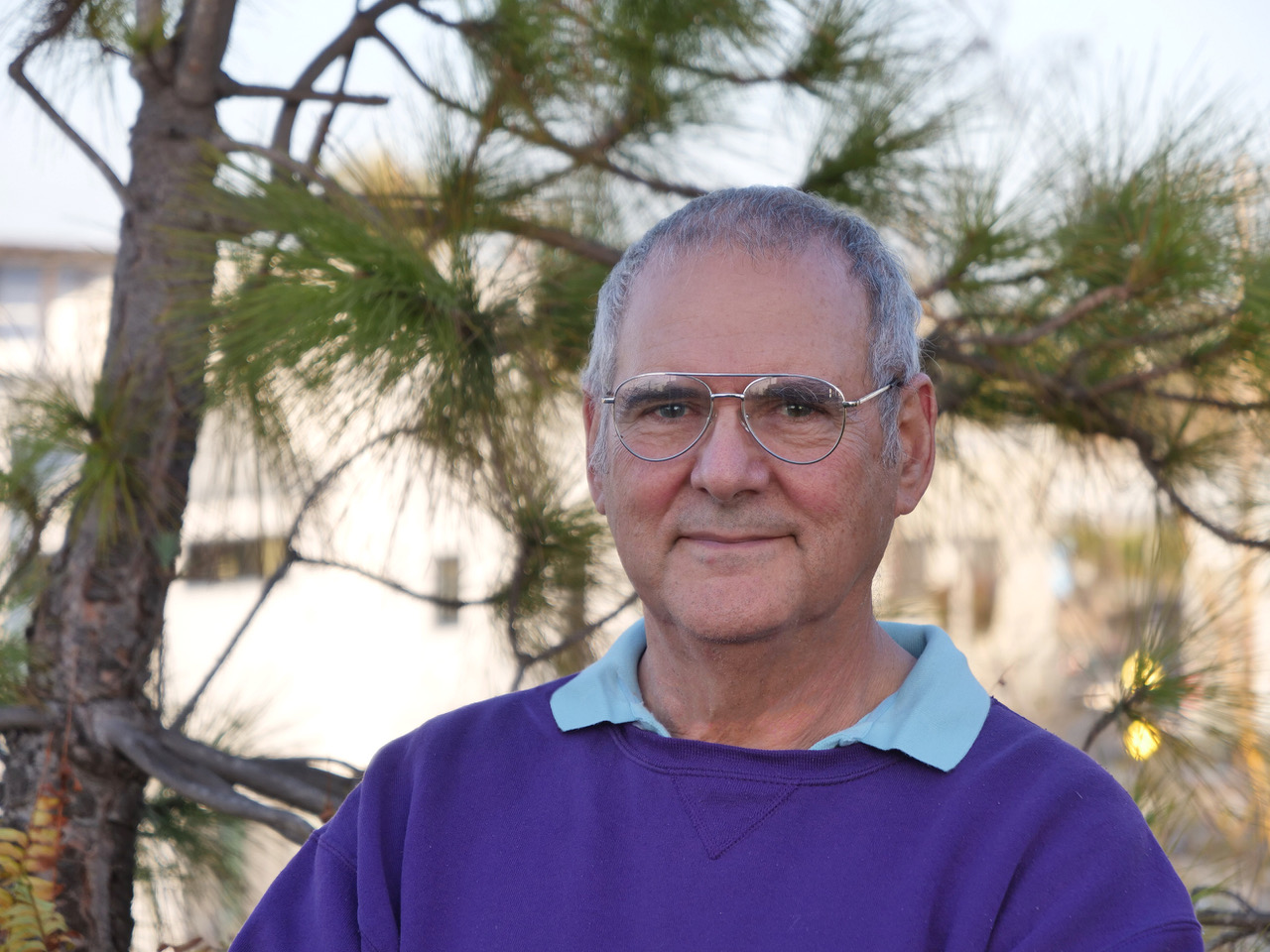 Today the Venice Paparazzi spotlight takes a political twist.  This is one of three interviews in our Who’s Your President series.  The purpose is to get to know each of the three candidates running for President of the Venice Neighborhood Council.

I was born and raised in West Los Angeles, a first generation American.  I have clear memories of the 405 Freeway being constructed, visiting Venice beach and Ocean Park when the amusement park was still operational, complete with the entry through a huge aquarium, a time when buses ran on electricity provided from an overhead grid of wires, and train cars occupied the railroad tracks that we can still see embedded in some of our streets.

My parents were immigrants who came here with nothing more than the clothes on their backs.  After being diagnosed with abnormal learning conditions in the first grade of public school, I was educated within experimental environments.  As a teenager, I returned to public school at University High in WLA but with the luck of a draw, I was selected for IPS (Innovated Public School) and, although I never had a formal graduation, I learned about how to get stuff done in the real world.  After that I spent a few years at Santa Monica Junior College enrolled in trade courses (welding, auto repair and body shop, architecture and home construction) before going to work full time.

My early jobs included working as a handyman fixing friends’ parents’ houses.  From there I followed my love for cars and began building race cars and restoring antiques.  For a while I even worked on cars for actor Steve McQueen, who had a sizable collection.  But my favorite car of all was a Mini Cooper I purchased in Europe.  It had belonged to Brian Epstein, the Beatles’ manager, and it was a very rare Sprint model.  After completely restoring it and building it out to racing standards, I sold it to help kick start the funding of my company.  That was one of my only regrets; I loved that car and had put so many of my skills into the restoration of it.

My father became a successful entrepreneur who built his company from working out of our garage into a 100,000 square foot factory in South Central Los Angeles with more than 100 employees in the late 1970’s.  He then recruited me to help build it even bigger.  Having grown up working on weekends and summers for him, I understood the entire operation, and my other skills allowed me to oversee the move to a new half million square foot building.  I was tasked with maintaining the operational aspects of the business with no more than a week of down time on the production floor.  I achieved these goals and he asked me to stay on and work for him full time.

One of my hobbies included building electronics.  I started with ham radios, then calculators (which would someday replace adding machines), before finally assembling a microcomputer in 1977.  I had a couple of nerd friends who were into the same sort of hobbies, and on weekends we would get together to compare notes and brag about our progress.  We talked about stuff like how we could get the display to show a full line of characters before crashing.  My best friend lived in Santa Barbara so, driven by the necessity of having to lug five or six boxes of delicate handmade state-of-the-art electronic computer equipment into my car, I designed a portable enclosure to house all the parts.

Shortly after repackaging my computer parts into one cabinet and getting it to reliably work, not a small feat, which taught me a lot about Radio Frequency Interference (RFI) and Electro Magnetic Interference (EMI), I showed it to the owner of The Computer Store, a hobby store for computer nerds.  Before I left the store, he handed me a purchase order for 25 machines and asked how soon he could take delivery.  Underfunded and with little knowledge of how to operate a business, I founded a corporation and began manufacturing the first portable computers (U.S. Patent # 4294496).  The orders far outweighed our production capabilities, but we managed to sell and deliver machines to people all over the world, including the U.S. military and major companies like General Dynamics, Sandia National Labs and Bolt Beranek and Newman (BBN), to name a few.  In the early 1980’s, after IBM launched their first PC, I decided to dissolve the company due to lack of funding to retool and compete in the expanding market. 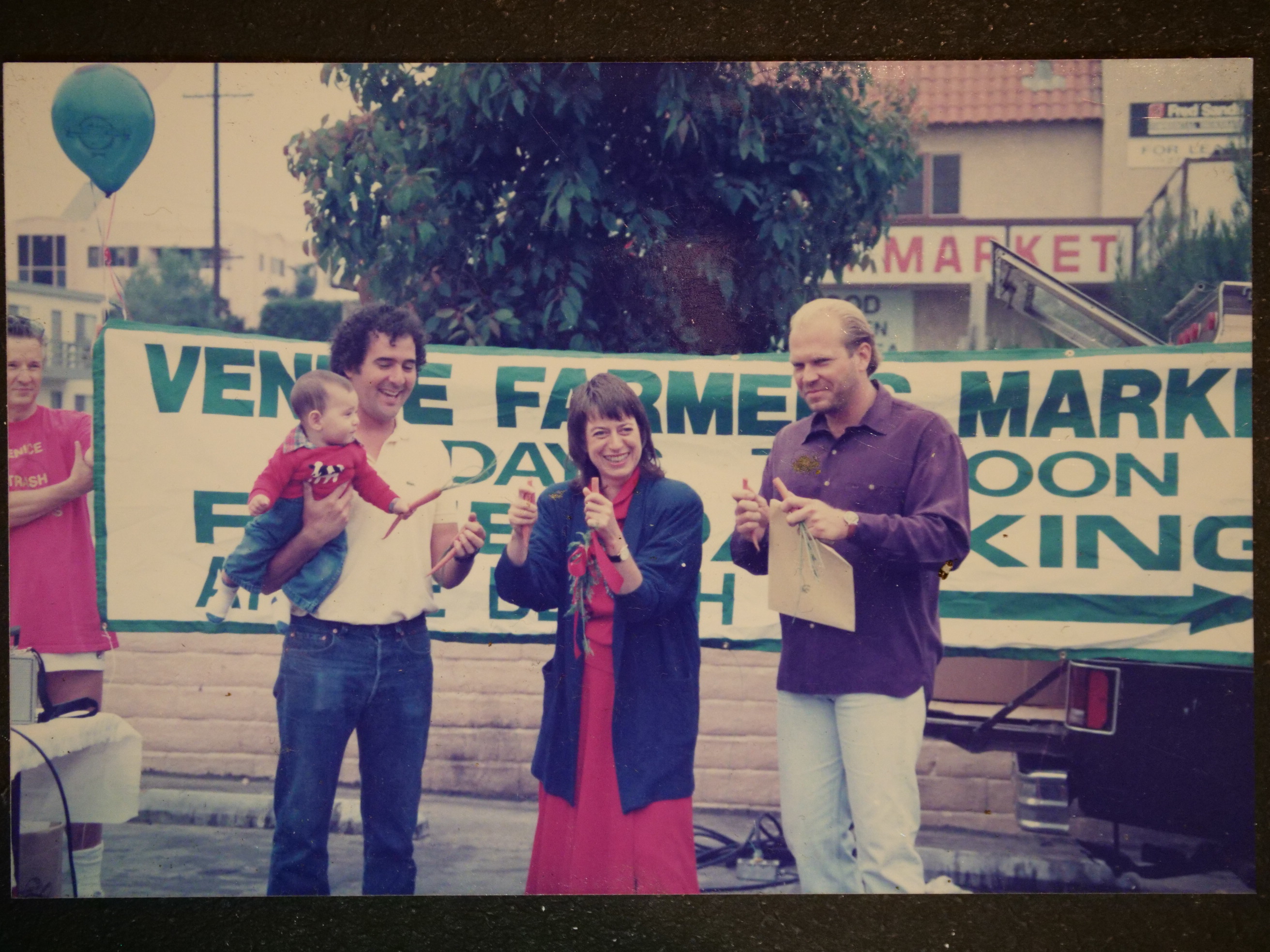 In 1983, standing at the desert table at a friend’s New Year’s Eve party, I met the love of my life, Melanie.  She was working 24/7 for the Los Angeles Olympic Organizing Committee.  I decided that if I wanted to see her, I needed to get involved too.  I was hired as a technology consultant, but lent a hand wherever my expertise was needed.

Melanie and I traveled throughout Europe after the Olympics before returning to Santa Monica where we both rented apartments.  Shortly thereafter, we married and decided to buy a commercial property in Venice where I would design and build an office and home for our soon-to-be-delivered son.  Melanie, who had graduate degrees in foreign languages and had been in charge of recruiting and managing volunteers with foreign language skills for the Olympics, started a business offering language services.  Meanwhile, while I was building our new building, I became involved with the community.

In 1989, I was asked if I was interested in trying to save our failing farmers market.  At the time, it was located in front of the Venice Pavilion on Ocean Front Walk.  Lack of parking and exposure to passersby were major factors of its demise.  I decided it needed to be moved to Pacific at Venice.  After the move, the market grew from three farmers to over 30.  Now, after 30 plus years, the market continues to be a high point in my life while providing the community with healthy produce and a place to catch up with friends and neighbors.  Held on Friday mornings, mostly only locals attend, but it also serves as a destination for school field trips of young children who learn the importance of eating a balanced, healthy diet.  One of my greatest joys is when a customer greets me and says, “When I was a child my parents brought me here and now I’m sharing the experience with my children.”  What a wonderful feeling to know I have touched so many lives. 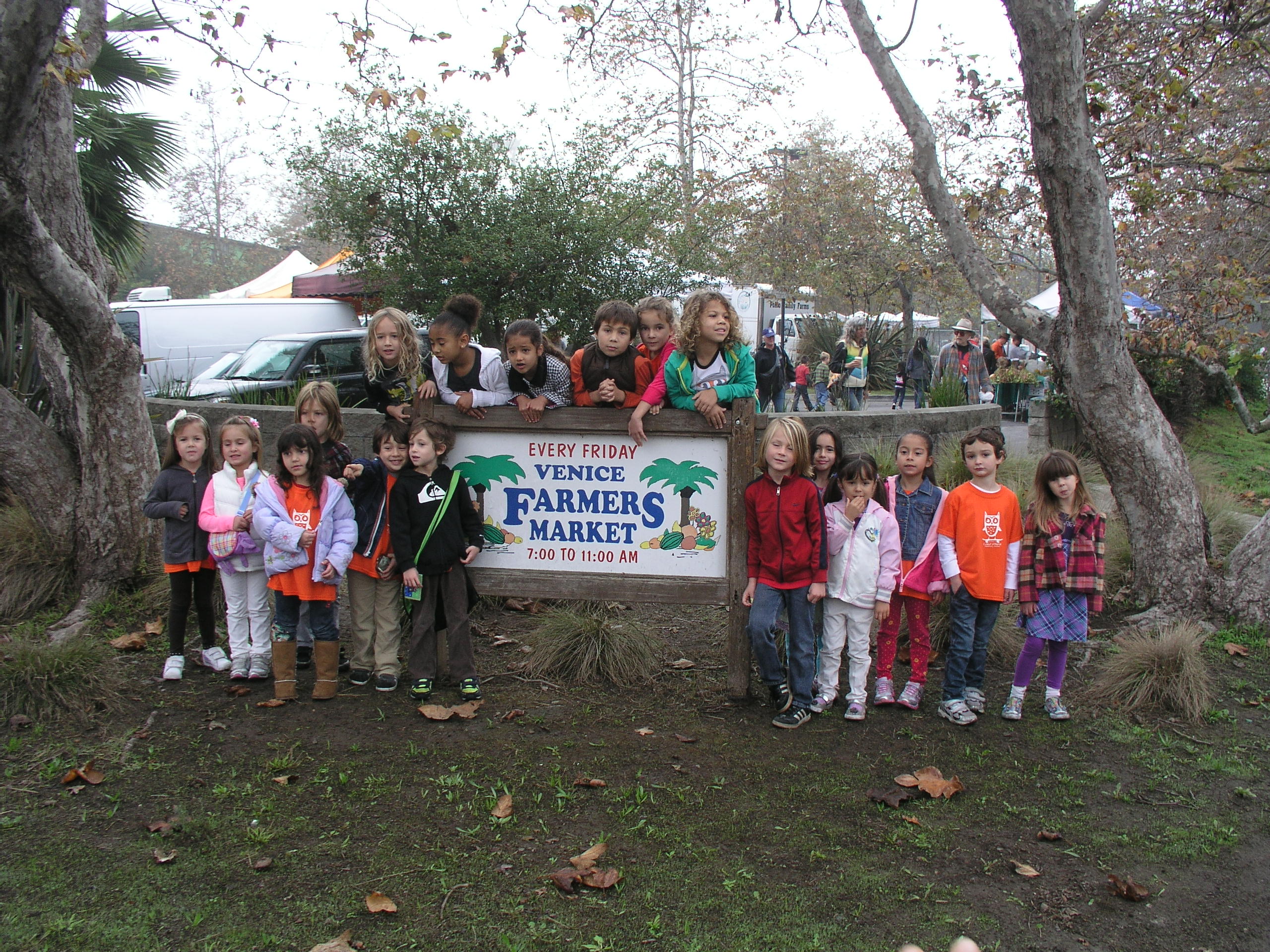 How long in Venice, and what have you accomplished/done since you have been here? Community Involvement? 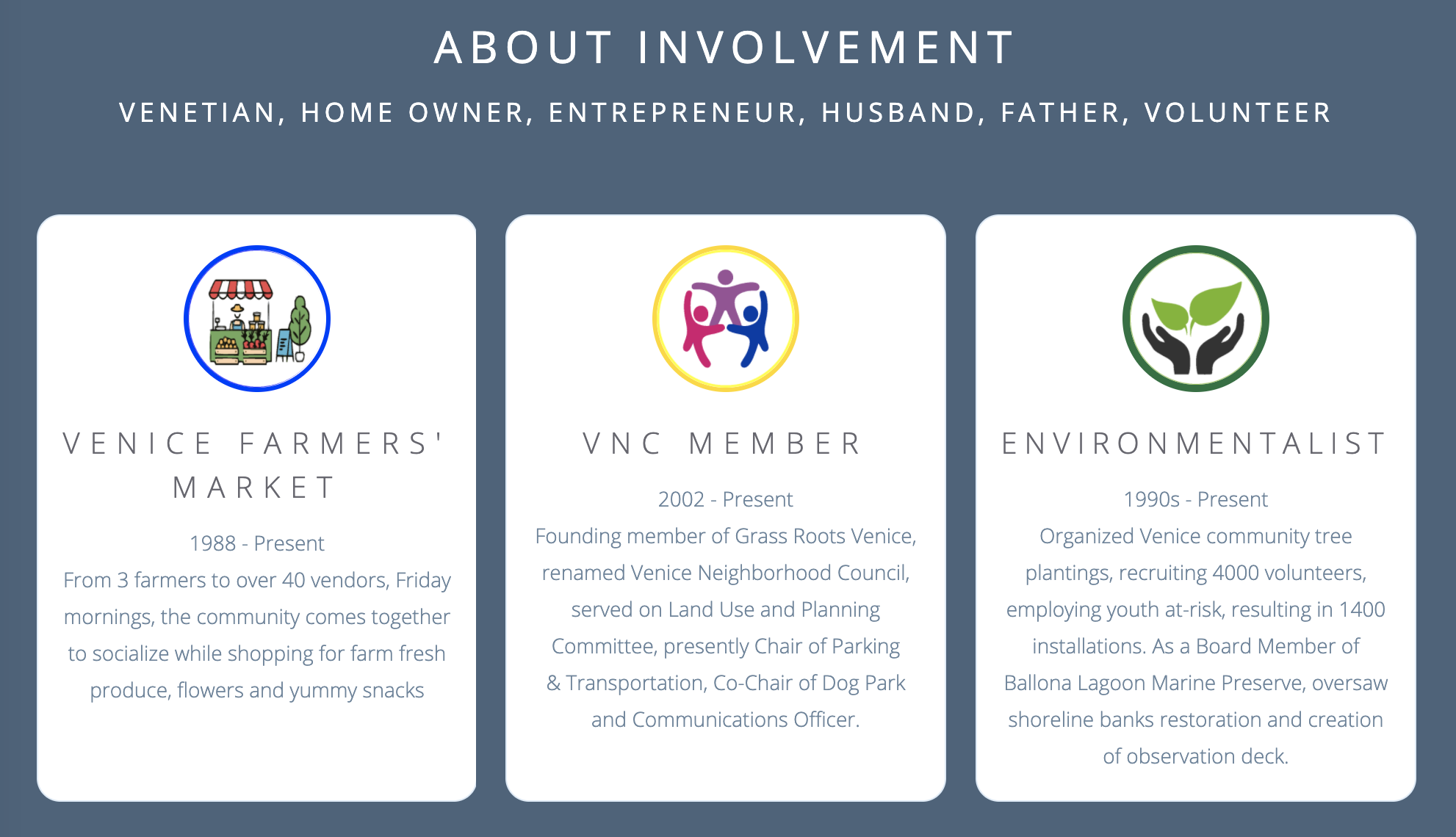 Why are your running for VNC President?

I love my community and I’m not the kind of person to complain about stuff and sit around and do nothing to try and improve things. In 2002 neighborhood councils were voted into existence as part of the City Charter Reform with the intent to empower local communities to have a voice in City governance. I feel like it has been too long since our community was represented in City Hall and given the chance to participate in the decision making process.

I want to carry our message of reason, a clear message that our quality of life in Venice matters. I want to fix the problems our community is suffering from.

What are the most pressing issues facing Venice, and what are some concrete steps you would take to solve them?

First, Homelessness: I believe the homeless situation is one of the most pressing issues facing Venice. I would work to find humanitarian solutions for the unhoused people living on our streets. Over five years ago, I identified a number of unused and surplus City properties across CD11, and, over three years ago, the VNC approved an Alternate Site Plan I created for the Council District 11 Bridge Home shelter project that Mayor Garcetti introduced. Our Councilman refused to consider my proposals and now we have Bridge Housing on Main Street in Venice.

Second, parking: Lack of parking is an issue for residents, tourists, and impacts our ability to create the kind of smaller unit workforce housing that existed when Venice was first developed. For years I have been advocating that we create parking structures west of Lincoln so that we could create enough parking in Venice (in the Coastal zone) so that Venice would qualify under the Coastal Commission guidelines for parking passes and the like, and so we would support our small businesses by enabling customers to park. Under my plans, the City would potentially collect millions of dollars in new revenue. Our council office has refused to meaningfully engage on our parking issues, and to the contrary, they keep making it more difficult for everyday residents in Venice to park.

Third, affordable housing: That everyone talking about expensive homes and “affordable” housing for the homeless, but what about everyone in the middle? We really need to be creating housing so that the teachers, fire fighters, police, and restaurant workers can live in Venice. People with basic skills that we all need like a handyman, carpenter, plumber or electrician not only can most of them not afford to live in Venice but their entry level jobs as assistances have to drive for hours every week just get to work. My parking plan would allow us to start building housing like the famous Venice bungalows again, which are disappearing because of the City’s planning requirements.

What would you like to accomplish in your two year term?

Although it seems that our community is sharply divided, on many issues we are not all that far apart, and I would like to bridge the divide. Uniting the community starts by giving all voices a chance to be heard, and I would like to create an environment on the VNC where everyone feels as though they have a voice. ON the more practical side, I would also like to automate more of the routine VNC tasks so that more time can be spent on the actual work of the community and so that information will be more readily available to stakeholders. I believe public representatives need to be accountable and keeping score of their performance should be presented in a transparent format.

Why should people vote for you?

I’m a straight shooter. I’m experienced, and I have a reputation of proven service and improving our quality of life in Venice.

Any thought on your political slogan?

The place I chose to create my family and have devoted my life to for over 35 years. A small town of nothing but unique characters that all have opinions that are well grounded with fundamental ideals that other cities all over the world are striving to incorporate into their way of life.

On Any Sunday, By Bruce Brown

What’s the best advice you have received?

I remember prepping for a very important conference and asked a close friend for his advice about how to best address the group with some tough issues, he responded do you know your material and the facts, I replied yes, he said then what is the problem, just remember one thing the

Anything else that you want to share with our readers?  Fun facts, awards, accomplishments, and/or your favorite activities?

I’m very proud of my family, my son is following in my footsteps, always thinking outside the box and changeling many of the great thinkers of our time. And my daughter Andrea at 29 years old has set two NCAA records, attended the 2016 Rio Olympics swimming the 50,100 and 200 freestyle and again is push herself to new heights as she prepares to compete in Toyko this summer, and all while attending medical school, now in her third year. Finely, my wife Melanie besides being the mother of my wonderful children, she supports and challenges me to be a better person, she is my love.