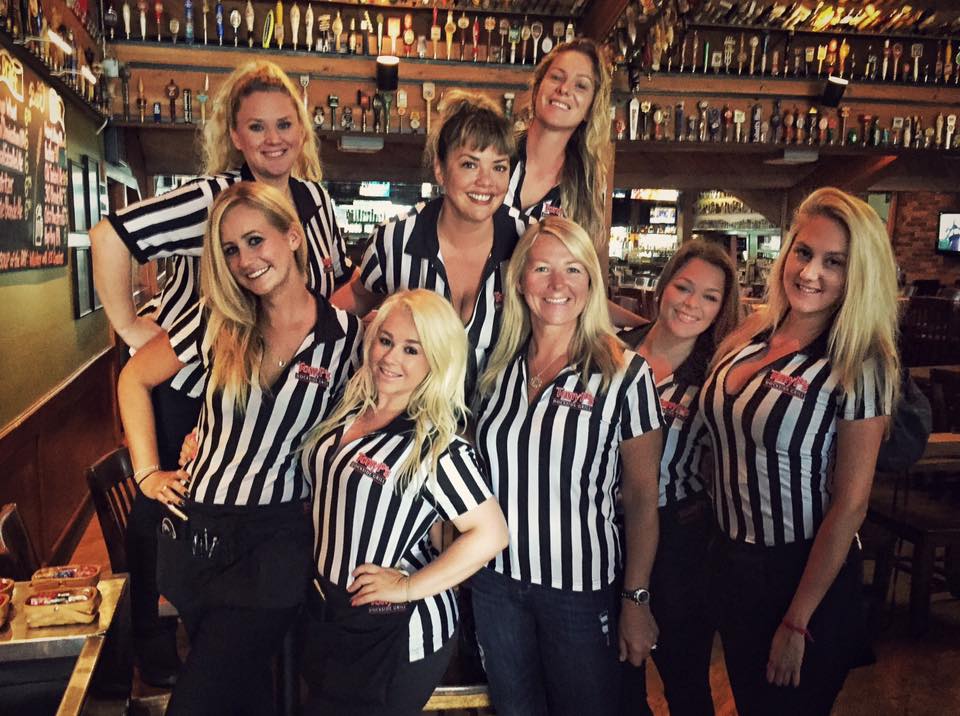 Super Bowl LVII is coming up quickly and it’s time to get your seats at Tony P’s Dockside Grill!  Sunday Feb. 12 is the day, and Tony P’s is the place to be.

Here is a message Tony P’s!  Join us for our 26th Super Bowl party.  The kickoff of Super Bowl LVII is coming up fast, and you better hurry if you wan to stake out a prime location to watch the big game right here at Tony P’s!

Seats in Tony P’s Tavern sell out every year, and Tony wants to give you the first chance to save your favorite seat on Super Bowl Sunday.  Seats in the Tavern are just $25 each, which includes a commemorative Tony P’s Super Bowl shirt, drink specials, giveaways, and the kind of sports viewing atmosphere you’d expect at Tony P’s.

Stop by the Tavern today and pick out your spot for the big game and you won’t miss a second of the action on Sunday, February 12th.  We will even have a large screen TV on the patio if you would like to see the sunset and watch the game! 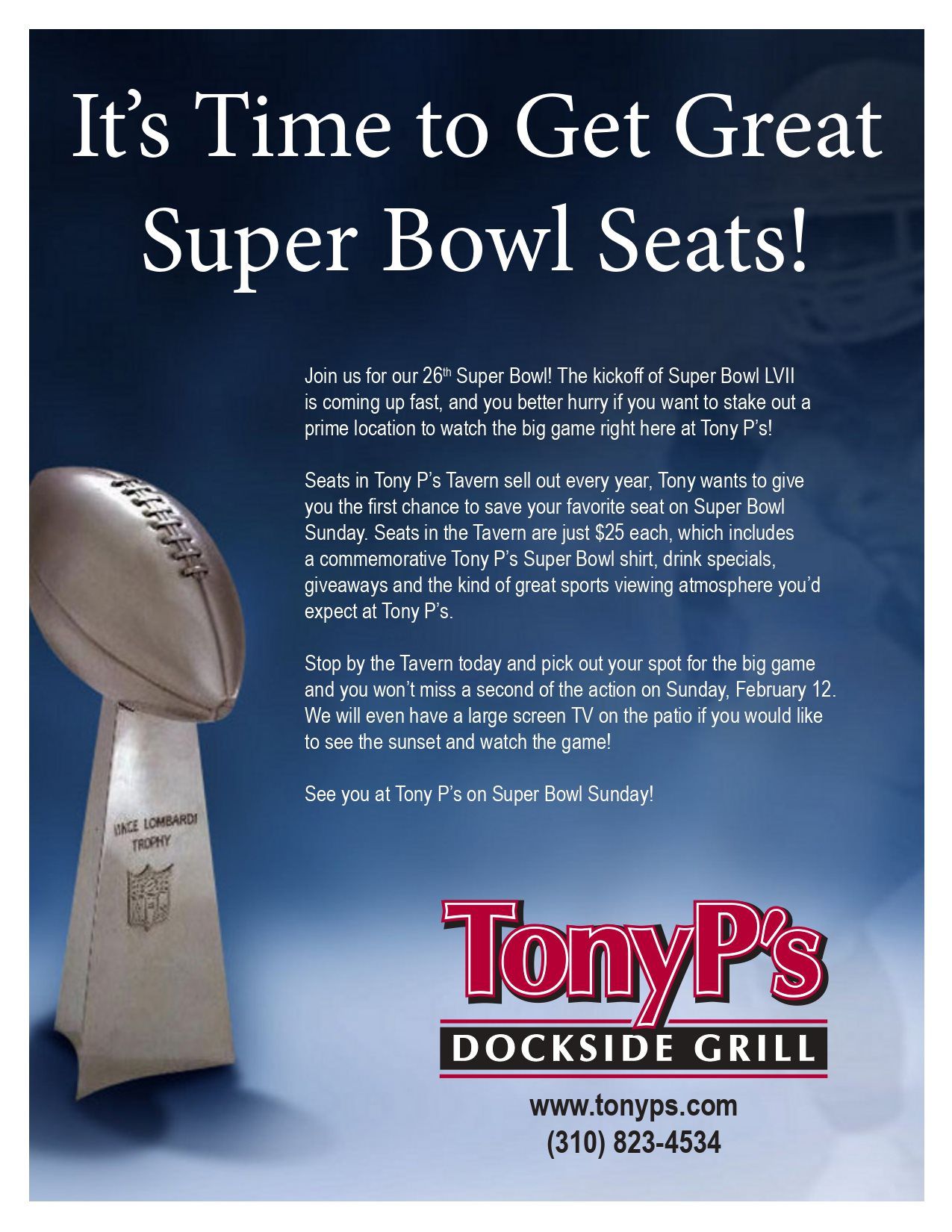 Tony P’s Dockside Grill in Marina del Rey is fantastic! Where else can you chill out with a plate of fresh fish and giant mug of ice cold brew while watching the sunset over the Pacific with boats sailing by? The menu is super deep, the beer selection is the best on the Westside, and the staff is superb! Smiling faces, and huge portions is the standard at this neighborhood favorite!  View all menus and specials on TonyPs.com

Tony P’s Tavern is your one-stop, sports headquarters!   Voted the Westside’s No. 1 tavern and loaded with eight 65″ LED Large Screen High-Definition TVs, they offer a fabulous array of more than 100 beers from all over the world and feature more than 16 California breweries. They also have a rotating selection of brews each month with more than 12 different choices. And, they have more than 50 wines by the glass from some of the finest wineries in California, as well as variety of original and traditional mixed drinks. Try one of their original martinis,(hand-shaken at your table), or relax with one of our after-dinner coffee drinks and an incredible dessert. It’s the perfect way to end a perfect meal. Be sure to check out the beer tap handle collection that includes more than 1,500 handles from all over the world … Guinness Book of World Records, are you listening?

Dan Ringwood and Tony Palermo have been in the restaurant industry for over 48 years. Meeting in Detroit, Michigan in 1975 as cooks, they carefully planned their future and dreamed of opening a restaurant. Confident in their skills, they decided it was time to move on. Tony entered a thirteen state chili cook-off and took first place honors. He came to Los Angeles for the United States finals, but finished in a disappointing 4th place. However, he had the insight to tour L.A. to see if the West Coast held the answer to his and Dan’s dream. Three months later, California become home to the newly unemployed duo. With no contacts and needing $$$, both set out to establish themselves. Tony landed a job as the Executive Chef at the Hard Rock Café. After several years in that position, he was promoted to Director of Operations for the chain. Danny was hired by Trumps, a 5 star restaurant in West L.A. as the assistant Pastry Chef. After developing his skills for several months, he was appointed Executive Pastry Chef. 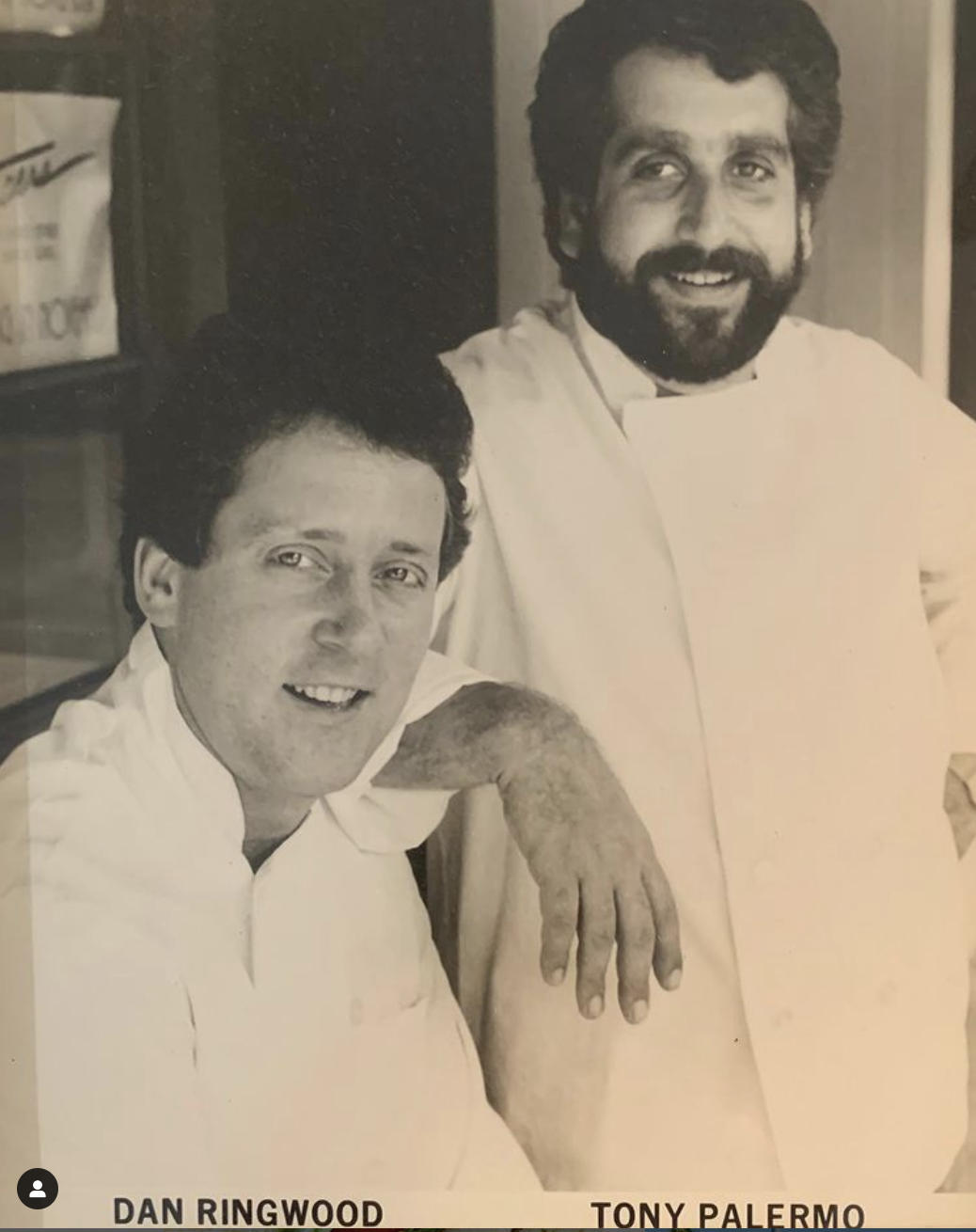 This picture goes all the way back to 1985 when they opened their first restaurant called “Teasers” on Third Street Promenade in Santa Monica! Photo courtesy of Tony P’s

IN EARLY 1985, HAVING NEVER LOST SIGHT OF THEIR TRUE GOAL, THE TWO QUIT THEIR RESPECTIVE JOBS AND BEGAN THE LONG, DIFFICULT TASK OF BUILDING THEIR DREAM RESTAURANT.

On December 26, 1985 that dream became a reality. Teasers Restaurant had been a mainstay in Saint Monica downtown Promenade for over 16 years, finally closing its doors on Friday November 30th 2001. Teasers was know as a local, fun, inviting, friendly, great food store that was a meeting place for celebrities, politicians, tourist, locals and people of every walk of life.

In late 1996, Tony P’s became the second vision of Tony and Danny’s. After purchasing Charlie Brown’s and spending a hard, difficult, three months remodeling the restaurant, it was reopened on Super Bowl Sunday, 1997. Now celebrating their 25th year of operation in Marina del Rey.  Tony P’s has become the place to be!

View all menus and specials on TonyPs.com

And if you haven’t been to Tony P’s Dockside Grill, you gotta go!

Check out the list of awards they have racked up!  Voted by local newspapers and TV Stations: 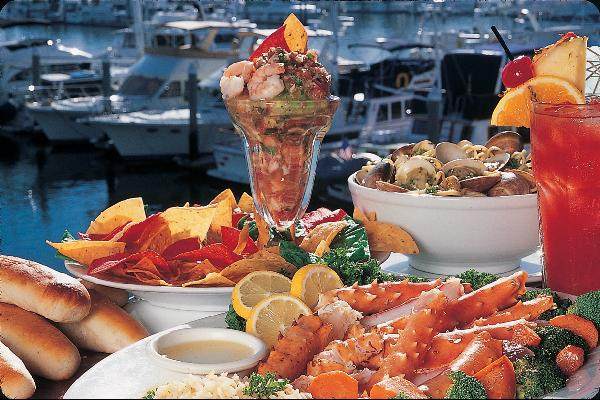 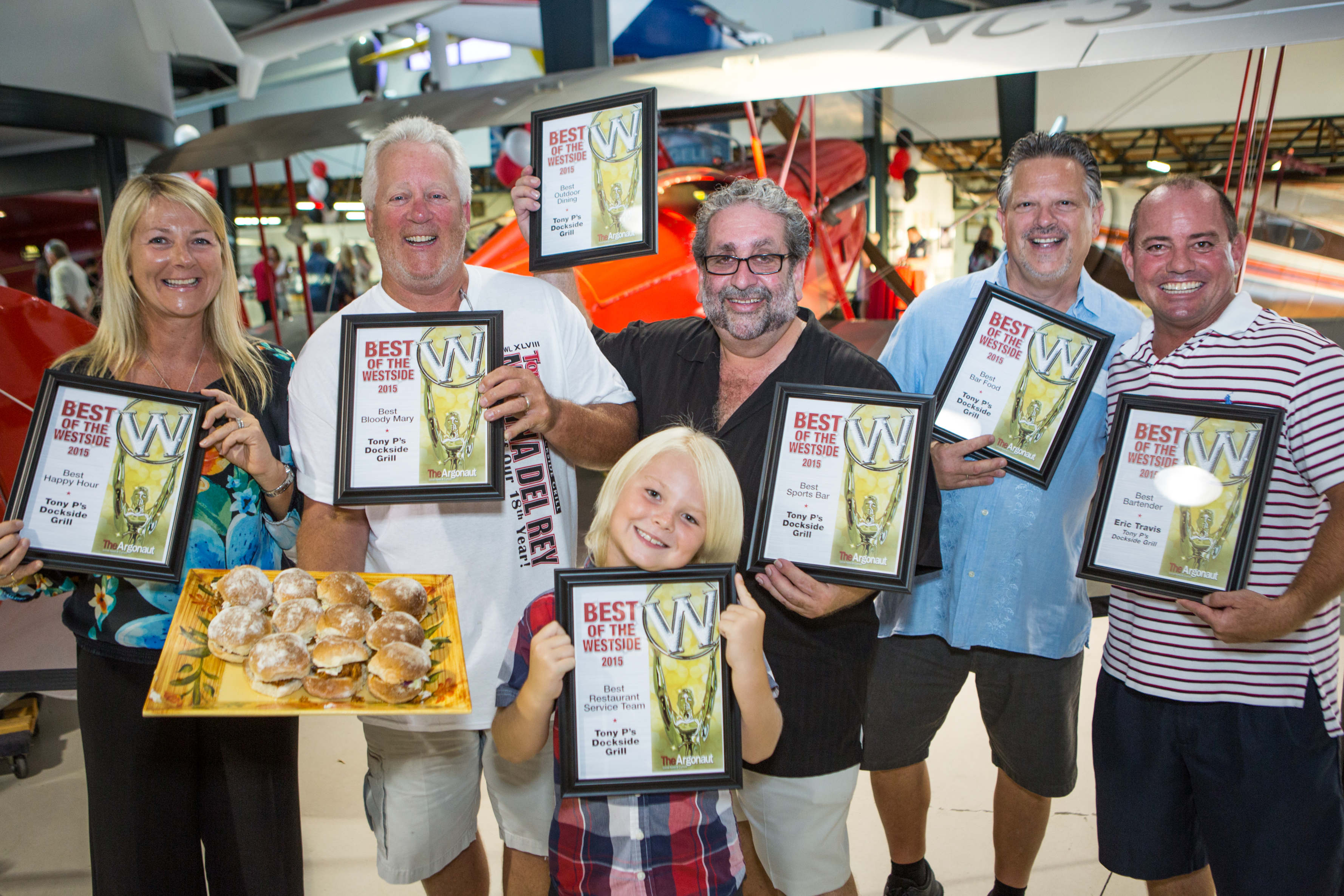