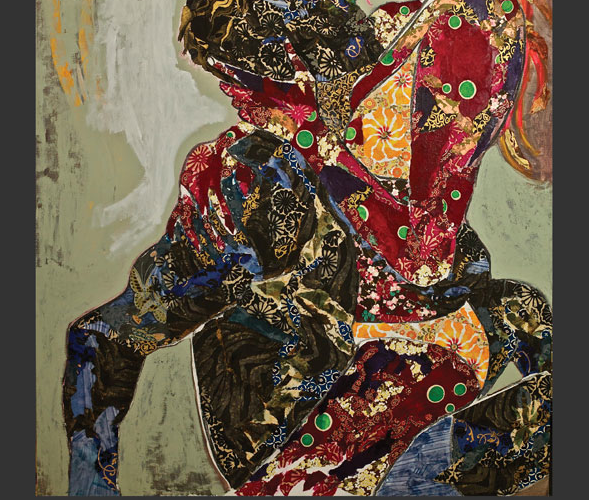 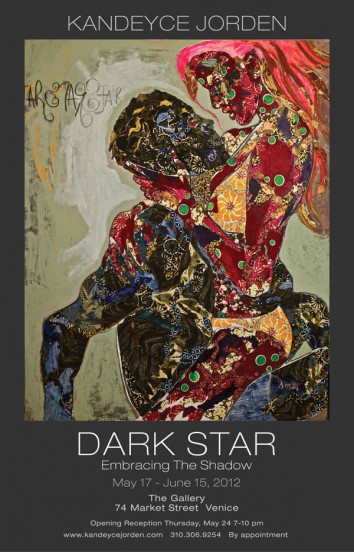 Kandeyce Jorden began painting soon after moving to Los Angeles fourteen years ago to pursue an acting career. She earned acclaim in Miguel Arteta’s Star Maps and soon after turned to directing. Her short film Undone won prizes in several film festivals including Nodance 2001. She has finished a documentary, Girl, a journal of her own dissolution and discovery while making a film about women DJ’s of the last decade.

Dark Star is Kandeyce Jorden’s second solo show after her debut, I Dream in Color, last year at World Wide Mind on Abbott Kinney Blvd. She makes use of a variety of styles and media to present a sort of obsessive narrative that seems to expand while trying to escape from itself.

Q & A ‘s with KANDEYCE JORDEN

VP:  When did you first discover your creative talents?
KJ:  A little over 3 years ago when I started working with paper, mixed media and collage.

VP:  Could you tell us about some of your work?
KJ:  I like working with bigger canvases and life size characters. I would love to make public art.

VP:  What inspires to you to keep going and how to you keep yourself motivated?
KJ:  Seeing other peoples work really inspires me. Going to museums, galleries, and watching movies. Also, learning about different mediums. I want to experiment with other materials like metal, resin and photography.

VP:  What is your approach to design?
KJ:    I collect and/or photograph images that grab my attention even if I don’t know why. Sometimes it’s a repeated theme that keeps showing up. Sometimes it’s a feeling I just can’t shake. But once the general idea is on canvas, the painting starts to take on a life of it’s own.

VP:  Any influences or anyone you look up to when creating art?
KJ:  Marlene Dumas, Cindy Sherman, Francisco Clemente, and Joan Brown just to name a few.

VP:  Tell us your favorite thing about Venice?
KJ:  The diversity and the familiarity.

VP:  Lastly, any words of advice aspiring designers/artists?
KJ:   Trust your instincts. Perfectionism kills. And don’t listen to what other people say!

Dark Star will be on view at the Gallery 74 Market through June 15th.

Click here or on the “View Photos” button below, to view additional photos from this event

Dark Star will be on view at the Gallery 74 Market through June 15th.