A letter and painting to Arnold Schwarzenegger from Artist Peter Wood

A few weeks back there was a knock on the door of the Venice Paparazzi headquarters.  It was Peter Wood and Josephine Wallis, two artists on a mission.  The couple had found Venice Paparazzi in hopes that we could connect them with Arnold Schwarzenegger. It turns out that they have created a painting of Arnold and his buddy Franco Columbo and want to give it to him. 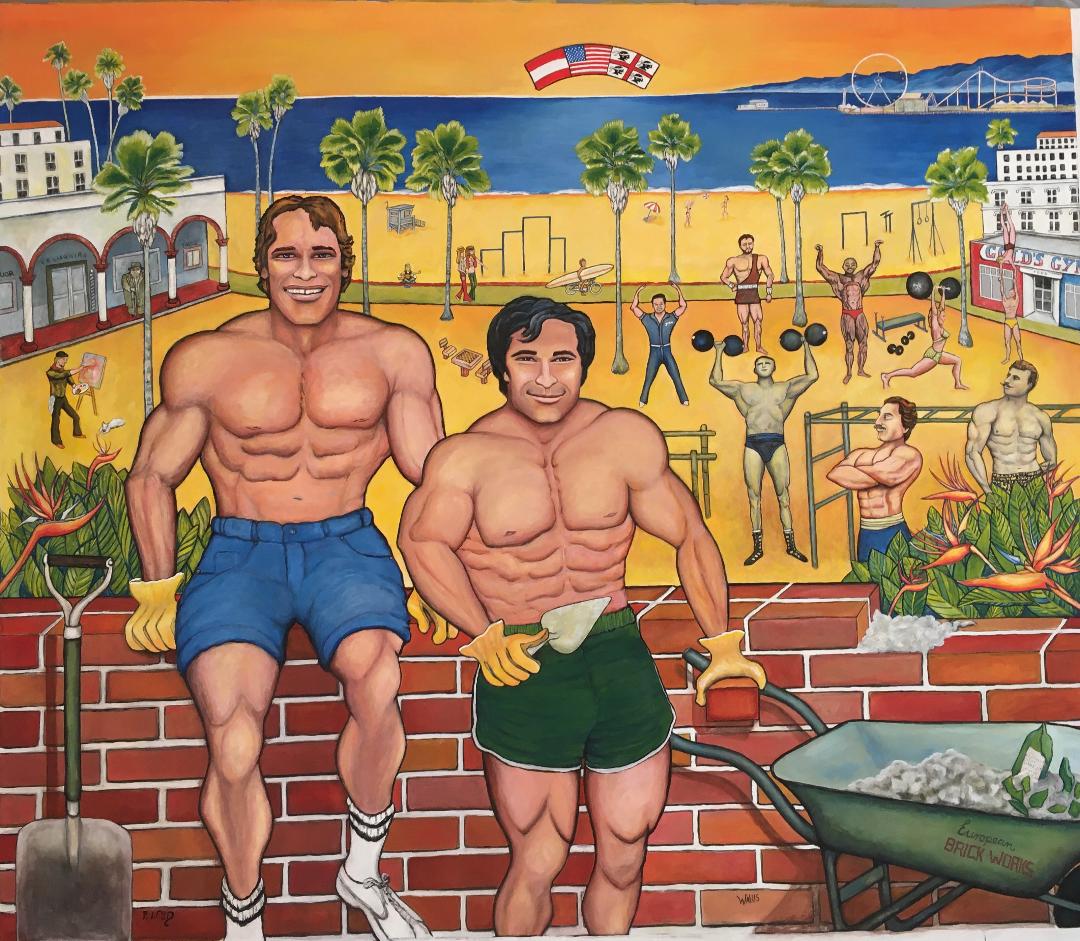 A gift for Arnold. Painting by Peter Wood

I explained to them that while we do not have a personal contact for Arnold, we actually do talk with him periodically, as Arnold often bikes by the Venice Paparazzi garage on Speedway Ave.   I offered to give Arnold a small copy of the painting, in addition to the artists contact, next time I see him. Furthermore, I told them if they would write a letter about their painting, we would publish it on VenicePaparazzi.com, in hopes that someone in our readership will relay the message to Arnold.

Here is a letter to Arnold Schwarzenegger from Peter Wood

Here is how the painting came to be:

I began lifting weights before you came to America. There were very few gyms in Cleveland Ohio then; our weight room in the 105th Street YMCA was tiny, and the bench was homemade. I arrived with a book on weight lifting but the first day, a guy told me to put the book away and my instruction began. My family hated it all. But I loved it. I worked out 6 days a week, split-routine and my life changed in so many good ways. But the larger community was very biased against any form of physical self improvement. You and Franco and others of your generation changed all that. Thank you.
,
A few years ago, I began to look at some of your fun, humorous and positive videos on YouTube.  Together with my long term partner Josephine (40 years and counting) we began thinking of doing a painting inspired by some of your videos with Franco. We loved the camaraderie, the positiveness, the humor. We are both artists, with a track record which includes doing 490 paintings for the House of Blues chain of clubs, and I got a Doobie Brothers album cover (World Gone Crazy). 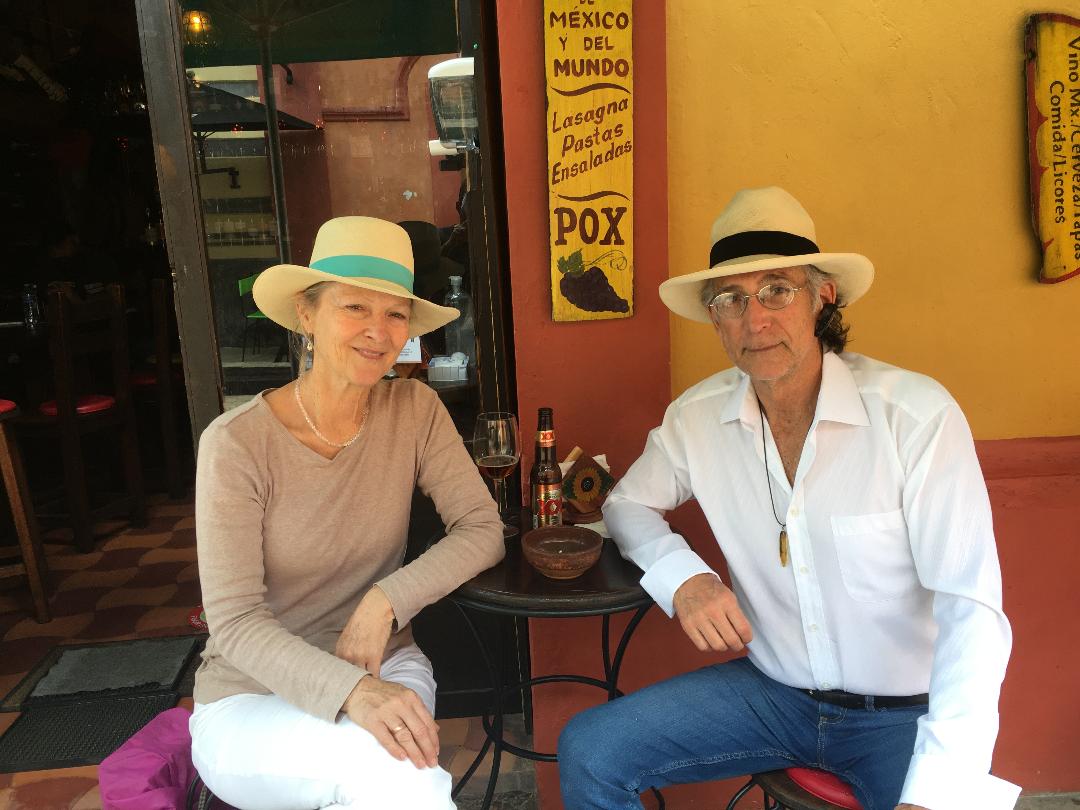 .
We were living in southern Mexico in the small city of San Cristobal de las Casas.  Covid lockdowns had just begun, and we were wondering what to do with ourselves.  Franco had died some 6 months earlier and we were moved to do a painting about your friendship. We figured that after it was painted, we would ship it to you DHL, hopefully in time for your BDAY…but all that proved harder to do than we thought. Neither of us had any idea how difficult it would be to “just send” a gift to a celebrity of your renown.
.
So, we have included as much detail as the work of art permitted. You and Franco building a wall in Venice, Ca. ’roundabout 1970. The name of your company is on the wheel barrow: “European Brick Works.”  On top of the “mud” in the wheelbarrow is a broken bottle of Sardinian wine as Franco always liked to put broken glass on top of the walls you built. 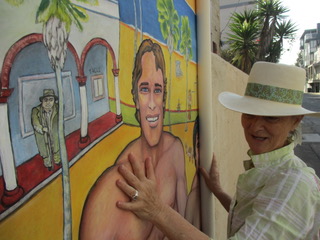 .
You’ll see the Austrian, American, and Sardinian flags of the young immigrants coming to realize the American Dream. As you so often say that you are NOT a “self made man” we have included a few cameos in the background. The man who you say is the person in all the history of bodybuilding who you would MOST want to work out with is there: Eugen Sandow. The man who you lived with and trained with in South Africa, Reg Park is there dressed as Hercules which inspired you to go into acting. Of course the Master Blaster is there, as is Sergio in his Victory Pose, and Jack Lalanne (who we met in Morro Bay just months before he died). The name of the gym where I was working out in San Cristobal de las Casas is ‘Syg Klein”, so I included him too…with his famous “challenge,” and Pudgy Stockton who worked out in Santa Monica is there too. PLUS, a few acrobats, Orson Welles who filmed the opening scene of Touch of Evil in Venice is under the arcade on the left, as well as an artist, a dog, a guitar player, a couple ol’ hippies…and not to forget Gold’s Gym.
.
We really hope you like it Arnold.  And of course, we still have to get the thing to you. It’s about 6 feet by 7…and we have it rolled up on a pvc pipe. Josephine and I are here in Venice, and this a.m. we held the painting up in front of the WALL and a passerby took a few snapshots. 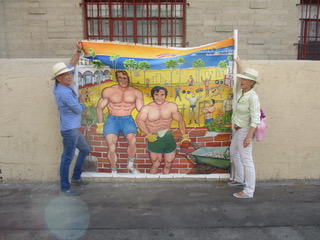 We hope  Alex and Edizen from Venice Paparazzi can be the go between and soon the painting will be yours.
.
So long, and thanx for all your inspiration and great movies.
Peter Wood and Josephine Wallis