Venice Paparazzi has covered Venice Holiday Sign Lighting events since the inaugural Venice Sign Holiday Lighting event in 2012.  If you were there at any of the 2012-2019 events, we may have taken a photo of you.  Check out event links below! 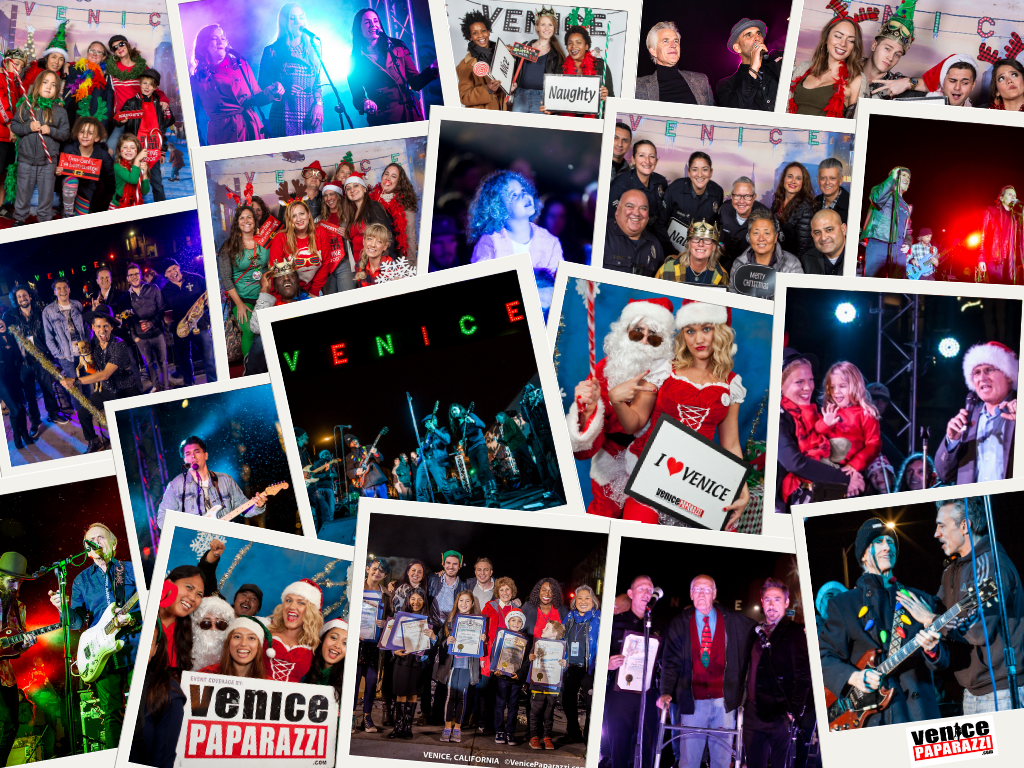 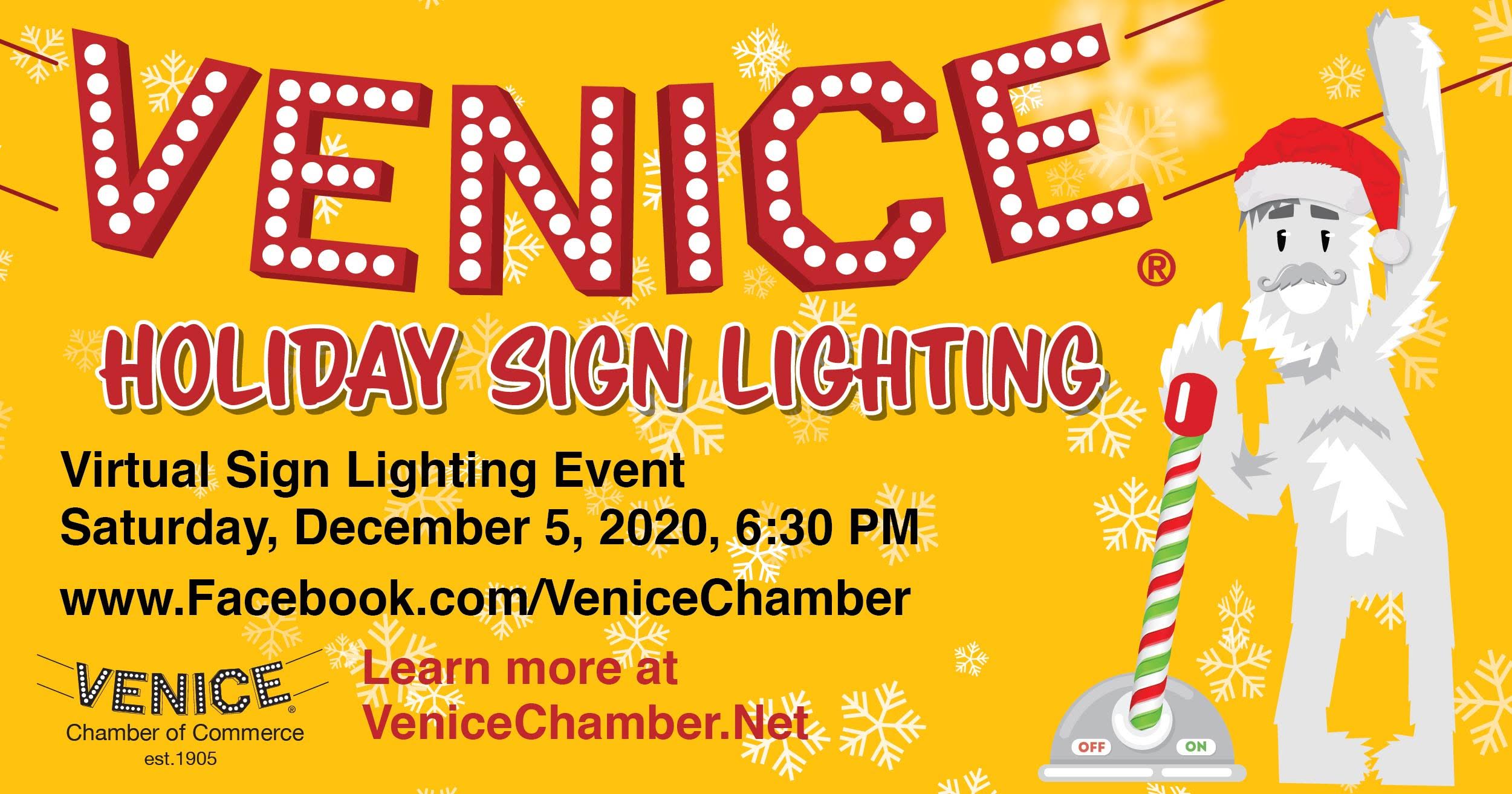 The 9th Annual Holiday Lighting of the Venice Sign is happening and it is going virtual! Join the Venice Chamber of Commerce and Venice community on Saturday, December 5th from 6:30 to 7:30 pm,  virtually on any device by tuning in to Facebook.com/VeniceChamber.  The one hour program will be hosted by long-time Emcee and Venetian Mike Newhouse, and will feature holiday messages from some of Venice’s favorite restaurants and bars. Event highlights include presentations to the winners of the 2020 My Venice Holiday poster contest and an award honoring the 2020 Venice Local Hero. The celebration continues at 7:15 pm with the traditional countdown to pull the symbolic switch lighting the iconic Venice sign in red and green colored bulbs.  This year, the Venice Chamber is excited to welcome Jon Huertas, joining as the special guest who will light the Sign and usher in the holiday season. Jon will join past celebrity residents Robert Downey Jr, Angelica Huston, P!nk, Robby Kreiger of The Doors, Matthew Modine, Andy Summers of The Police and Emmy-nominated actress Linda Cardinelli.

In the spirit of the season, the Chamber looks to take a moment to recognize a person who has made a longtime contribution to the welfare and culture of Venice.  This year, VCC is proud to honor Jesse Martinez, the 2020 Local Hero.  Featured in the recent documentary “Made In Venice,”  Jesse has dedicated his life to maintaining and improving the iconic Venice Skatepark. Born and raised in Venice, not only has he been an icon and innovator in the art and culture of skateboarding, standing alongside the giants in the sport, his lifetime devotion to Venice has saved countless lives by steering kids away from gangs and offering them skateboarding as salvation.  Jesse is very dedicated to skateboarding and passing on the traditions of Dogtown and he proves it every day.

The VCC would like to send a special “thank you” to all the generous sponsors. This event was made possible because of their support. VIP Sponsors include Clutch, Google, Great White, Hotel Erwin, The Butcher’s Daughter, The Rose Venice, The Venice Whaler, and The Waterfront Venice.

Jon Huertas currently stars as Miguel on NBC’s critically acclaimed series This Is Us. Prior to that, he starred as Detective Javier Esposito on ABC’s award winning dramedy Castle for eight seasons and his stand-out performance in

HBO’s miniseries Generation Kill as Sgt. Tony “Poke” Espera offered a streetwise view of the U.S. Marines’ 1st Recon Battalion during the 2003 invasion of Iraq. Jon, being a veteran himself, calls it the most meaningful role of his career.

In addition to a 20 plus year acting career, Jon is also a filmmaker having produced and directed Network Television  special features, a Holiday Special for ABC, music videos, award winning short films and two feature films earning him an appointment to the Academy of Motion Picture Arts and Sciences. Recently he teamed up with fellow Groundlings alumnus,  Kenny Stevenson, forming the writing/producing team behind the production shingle WestSide Stories where they have several TV/film projects in various stages of development.

Jon has lived in Venice for over 20 years and is one of the owners of the local favorite restaurant Clutch on Lincoln Blvd. Jesse Martinez stands out as a pioneer and innovator of modern day street skateboarding, and was also famous for his adventures with the Powell Peralta team, as well as his role in the establishment of World Industries, which jump-started a new era of skateboarder-owned skate companies.

Most recently, Jesse is known in Venice Beach as a hero for his work in getting the Venice Skatepark built and for his daily dedication in voluntarily maintaining the park and keeping it clean for skateboarders now and for generations into the future. “The Mess” has literally saved lives by steering kids away from gang life and offering them skateboarding as salvation. Jesse is 100% dedicated to skateboarding and passing on the traditions of Dogtown and he proves it every day.

Please do your part to help Jesse in his ongoing efforts to pay it forward for everyone that visits Venice and every skateboarder that rides the Venice Skatepark.

The Venice Sign, a federally registered trademark of the Venice Chamber of Commerce and Venice’s most iconic symbol, attracts thousands of tourists to Venice. In 2007, the Venice Sign Restoration Project recreated and installed the contemporary version of this historic sign.  Since that time, the Venice Chamber has been responsible for maintaining the sign and for protecting its trademark. Today this lasting legacy is restored across Windward Avenue as a tribute to the celebrated Venice of years past and a modern day gateway to the world famous Venice Beach. Continuing year-round, the Venice Chamber of Commerce, through programs and events, raises funds to support the maintenance of the Venice Sign. Those interested in adopting a bulb or donating can go to www.venicesign.org.

The Venice Chamber of Commerce is an organization of business leaders who actively serve as advocates for our expanding professional community. Through dynamic networking events and diverse committees, we support the interests of area businesses and contribute to improving the vitality of the local economy. To learn more about the Venice Chamber, visit www.venicechamber.net.