Greetings readers!  Do you know about the monument on the north west corner of Venice Blvd. and Lincoln Blvd.?

It is called the Venice Japanese American Memorial Monument (VJAMM), and was installed April 27, 2017, to commemorate the internment of Japanese Americans as a result of the bombing or Pearl Harbor.

View message from the VJAMM committee!

The Venice Japanese American Memorial Monument Committee will host a virtual VJAMM Commemoration via Zoom on Thursday, April 15, 2021, from 11 am to 12 pm, and will welcome a stellar line up of speakers.   Speakers include the U. S. Congressmember Ted Lieu; LA City Councilmember Mike Bonin; Bruce Embrey of the Manzanar Committee; Warren Furutani; Rev. Dr. Duncan Ryuken Williams of Tsuru for Solidarity; Becky Dennison and Orlando Nava of Venice Community Housing; Dolores Sloan of the Santa Monica Landmarks Commission; Laura Ceballos of the Venice Mexican American Traquero Monument Committee; Leslie Aguilar, inaugural recipient of the Arnold Maeda Manzanar Pilgrimage Grant, co-sponsored by the VJAMM Committee and the Manzanar Committee; and members of the VJAMM Committee.

The Thursday, April 15, 2021 event commemorates the 79 years after Executive Order 9066 of February 19, 1942 led to the forced removal and incarceration of persons of Japanese ancestry from the west coast and into War Relocation Authority “camps” during World War II; the 52 years after the first Annual Manzanar Pilgrimage began in 1969; and the 33 years after the passage of the Civil Liberties Act of 1988, which offered a Presidential apology and reparations to surviving internees of the American concentration camps.

ACR 46 requested that the California Department of Transportation issue an encroachment permit for the placement of the VJAMM at the northwest corner of Venice and Lincoln Boulevards, which passed both houses of the California legislature.   In April, 2014, Lieu’s 28th District of the California State Senate made a major contribution to the VJAMM Committee, and in appreciation and recognition, the VJAMM Committee permanently engraved his name and state office in the black granite of the VJAMM with other major donors.  Congressmember Lieu serves on the House Committee on the Judiciary and on the House Committee on Foreign Affairs, and most recently served as one of the nine House impeachment managers in the second impeachment trial of former U.S. President Trump.

Bruce Embrey, co-chair of the Manzanar Committee with Jenny Chomori, will invite all to the 52nd Manzanar Pilgrimage set for Saturday, April 24, 2021 as a Virtual Event.  Warren Furutani, Manzanar Pilgrimage pioneer, community activist, and former elected representative to the Los Angeles Unified School District Board of Education, the Los Angeles Community College District Board of Trustees, and the California State Assembly, will articulate his thoughts on the current issues of the day, as only the uniquely and quintessentially imitable Warren Furutani can and will.

Keynote speaker Rev. Dr. Duncan Ryuken Williams will share updates on his many social justice projects.  Author of American Sutra: A Story of Faith and Freedom in the Second World War, Rev. Williams has toured the U. S. with his book, detailing the extraordinary genesis of his research into Buddhist ministers and practitioners of Buddhism in the American concentration camps.  He has also led Tsuru for Solidarity campaigns to collect hundreds of thousands of origami cranes to hang at former and current detention facilities, in protest of the imprisonment of undocumented immigrants and children separated from their parents at the South Texas Family Detention Center in Dilley, Texas; at Fort Sill in Lawton, Oklahoma; at the Yuba County ICE Detention Center in Marysville, California; and at the Northwest Detention Center in Tacoma, Washington.  Rev. Williams participated in a peaceful march of Buddhist ministers, conducted in silence in Little Tokyo, Los Angeles, in support of Black Lives Matter in June, 2020.  Recently, Williams introduced panelists for a discussion, “From Japanese American Redress to Black Reparations,” and will moderate a conversation on “Reparations Past and Present.”  Rev. Dr. Williams, a Soto Zen priest, is a Professor of Religion/American Studies & Ethnicity at the University of Southern California, and the Director of the USC Shinso Ito Center for Japanese Religions and Culture.

Becky Dennison, Executive Director of Venice Community Housing, has continued to support the VJAMM, as did former Executive Director Steve Clare, who retired from that position.  VCH serves as the fiscal sponsor for the VJAMM Committee, and as a non-profit, made it possible for VCH/VJAMM to apply for the $50,000 Japanese Confinement Sites 2:1 Grant, which the National Park Service awarded in 2012.  Orlando Nava, Case Manager for Venice YouthBuild, has coordinated the maintenance of the VJAMM and the adjacent sidewalk and street curbs with YouthBuild volunteers on a regular basis.  Venice Community Housing provides “affordable housing with supportive services, education, employment programs, and public policy advocacy that advances racial and economic justice.”

Dolores Sloan, a Santa Monica City Landmarks Commission member and former Chair, pushed to preserve and protect the original Nikkei Kai Hall on Michigan Avenue in Santa Monica.  Laura Ceballo will speak of community efforts to install the Venice Mexican American Traquero Monument in the Venice Circle.  Leslie Aguilar will explain how the late Arnold Maeda, a charter member of the VJAMM Committee, inspired her to learn more about Manzanar, and to apply for the first annual Arnold Maeda Manzanar Pilgrimage Grant.  For information on how to join the Zoom Commemoration, please visit www.venicejamm.org.

Hama Sushi in Venice will once again host a VJAMM fundraiser, the evening of Thursday, April 15, from 4 pm to 9 pm.

Proprietor Esther Chaing will donate 10% of all dinner receipts to the VJAMM Committee for educational outreach, VJAMM maintenance, and funding the Arnold Maeda Manzanar Pilgrimage Grant.  The VJAMM Committee hopes many will support not only the VJAMM, but also this iconic neighborhood restaurant, which celebrated its fortieth anniversary in 2019.  According to the Venice Chamber of Commerce, “Esther Chiang, who purchased Hama in 2004, has made it a personal mission of hers to give back to Venice. Hama has not only supported the Venice Art Crawl and the Venice Arts Council, but perhaps most notably, has hosted fundraisers for the Venice Japanese American Memorial Monument for seven years in a row, generating over $20,000 in revenue for the project.”

To make reservations or order take out, please call 310-396-8783 or go online at Hamasushi.com/menus. 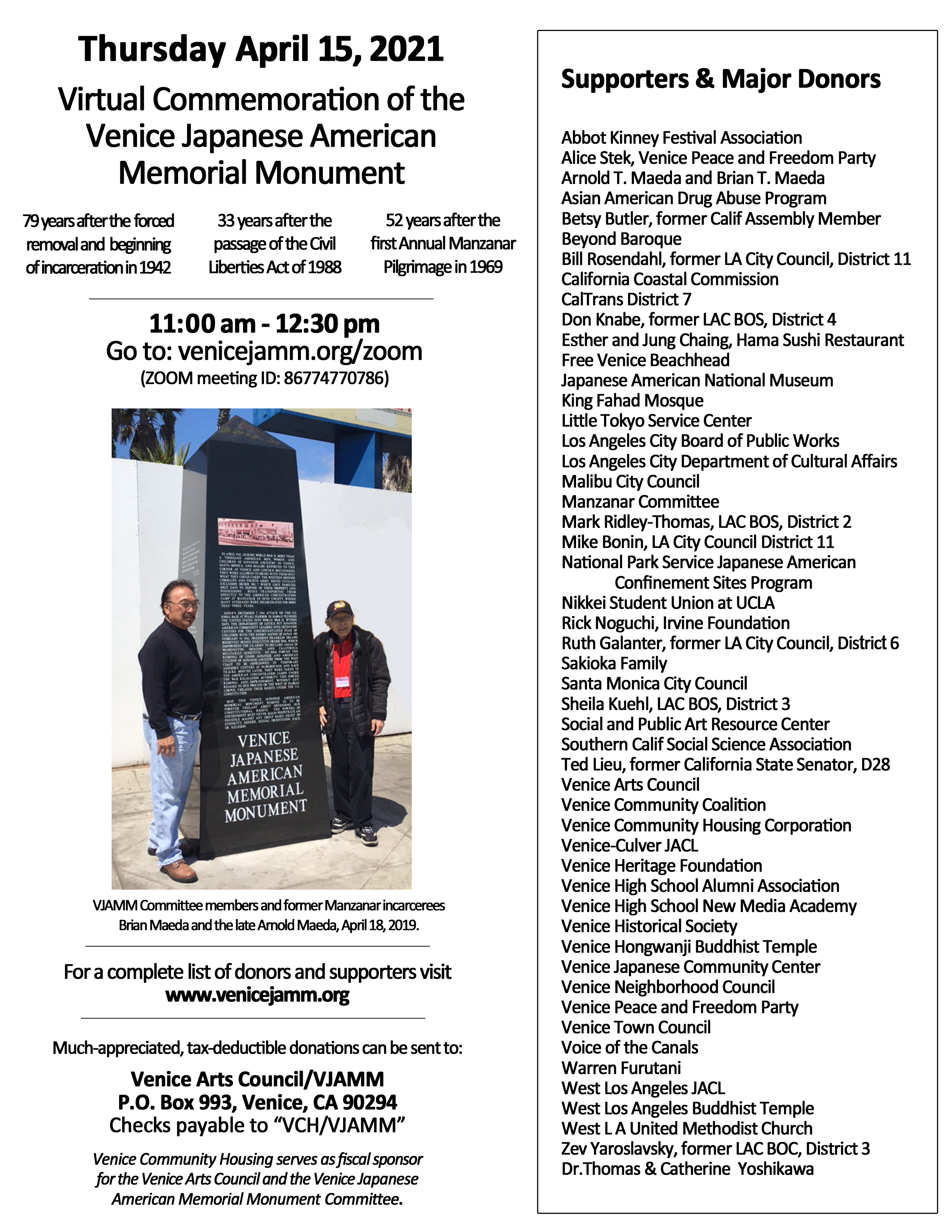 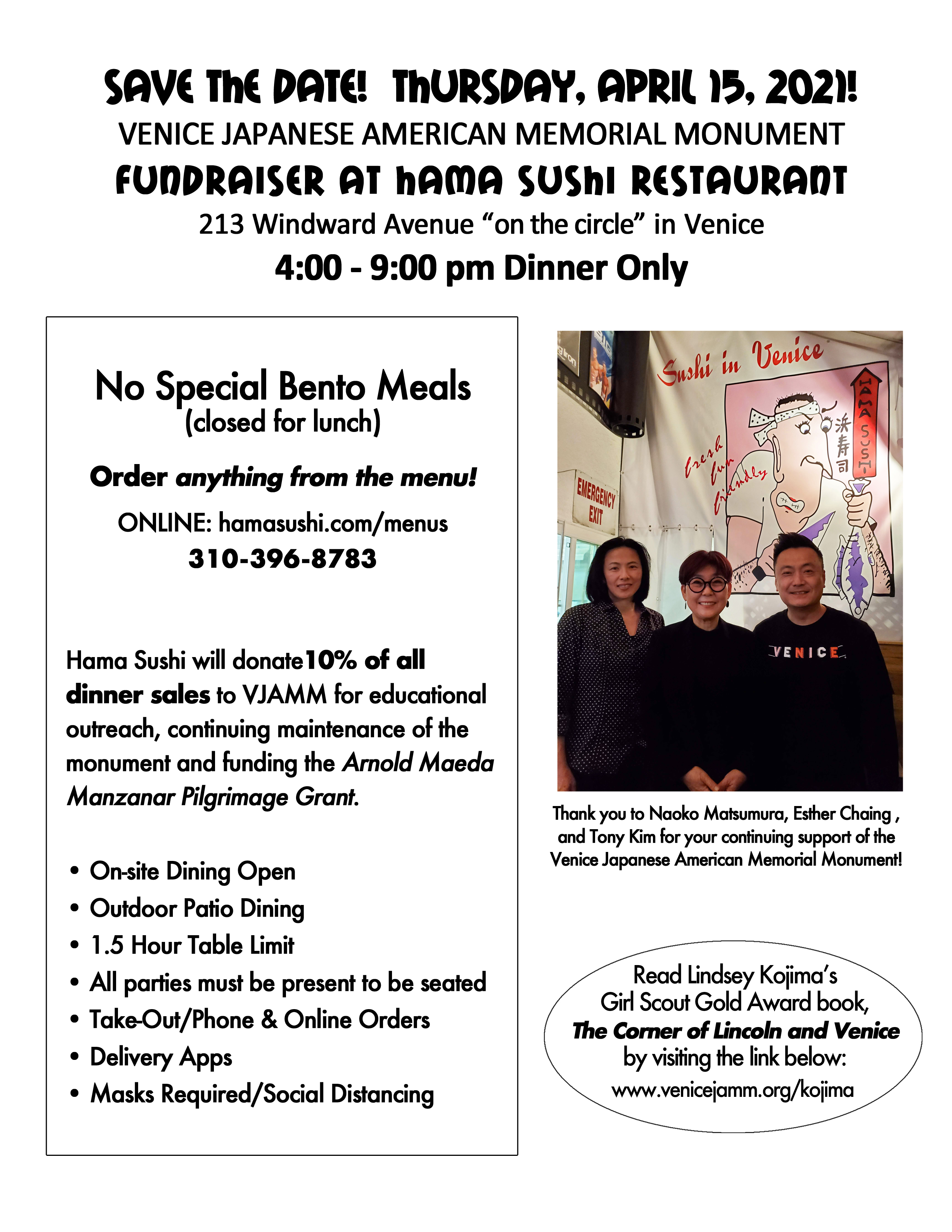 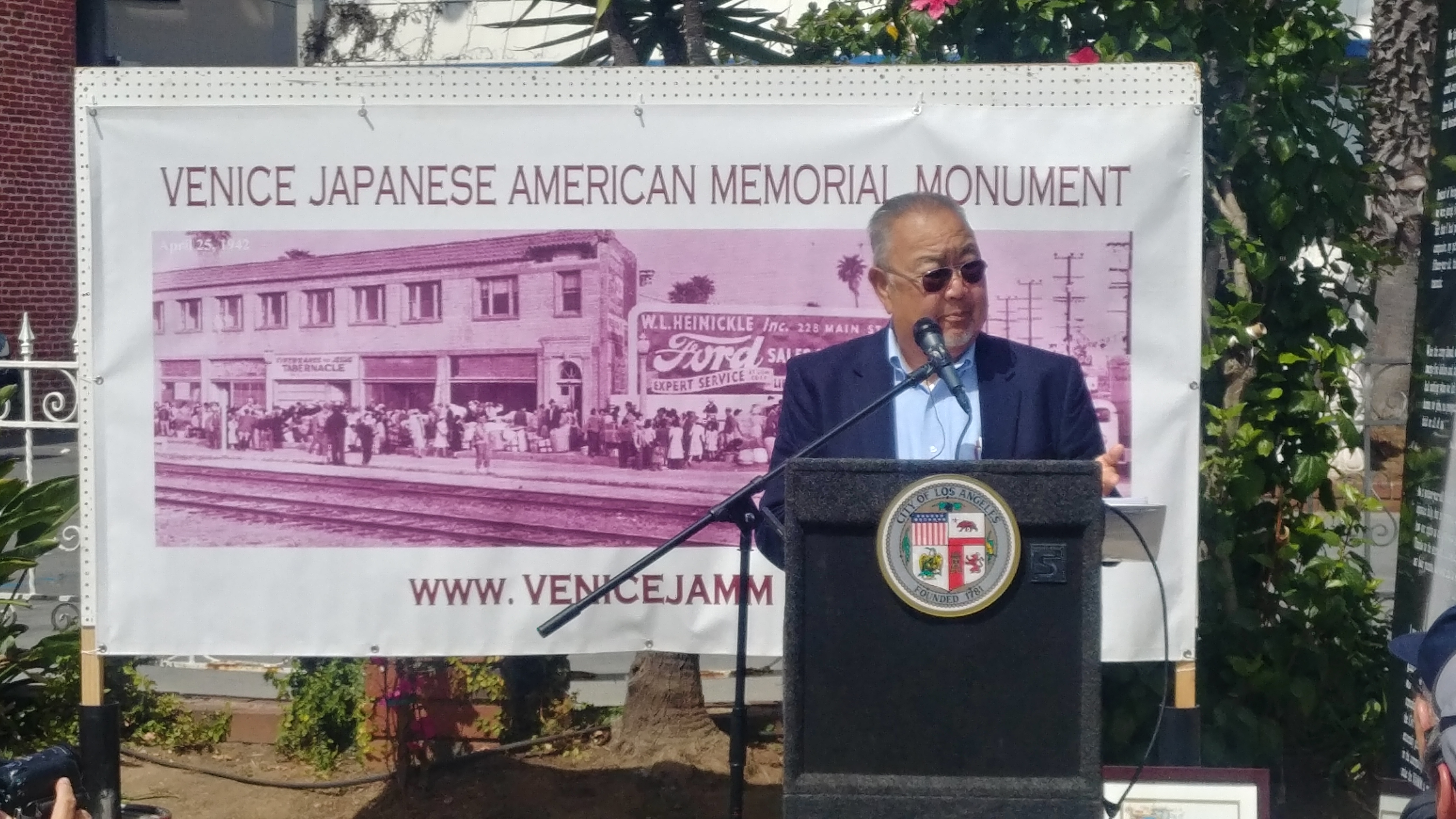 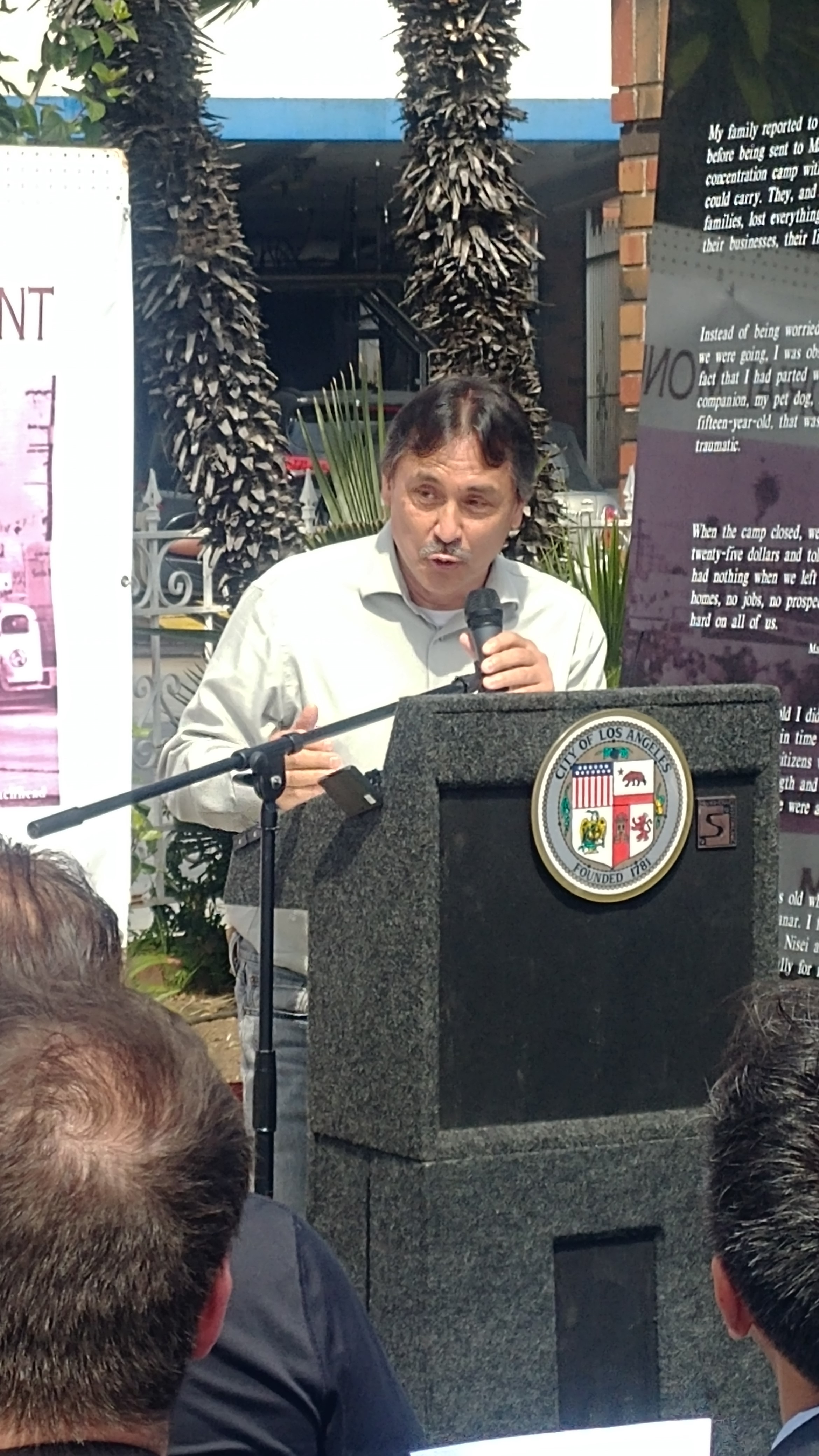 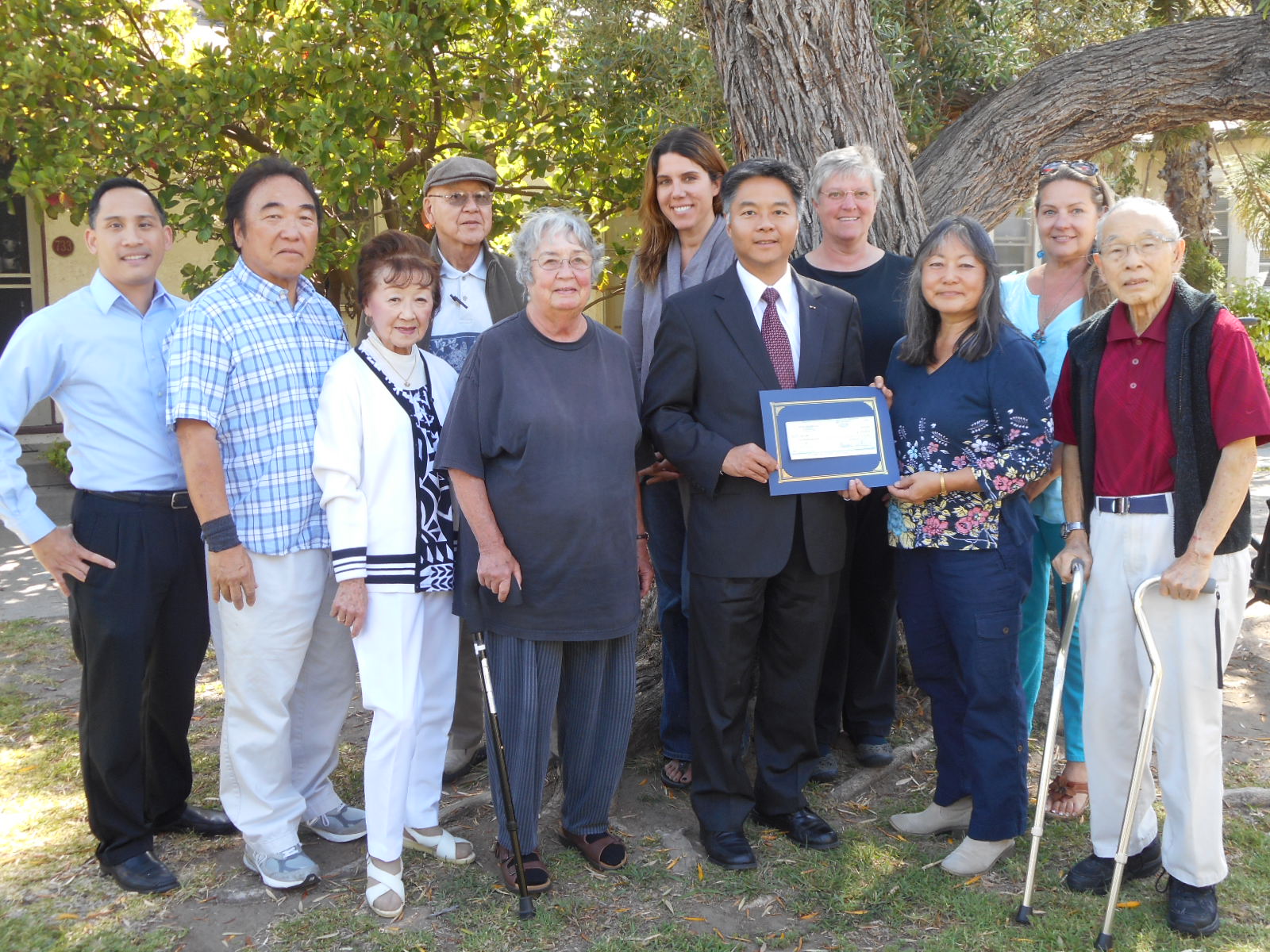 Then-California State Senator Ted Lieu presents the VJAMM Committee with a major donation of $5,000.00 in 2014. Photo courtesy of VJAMM 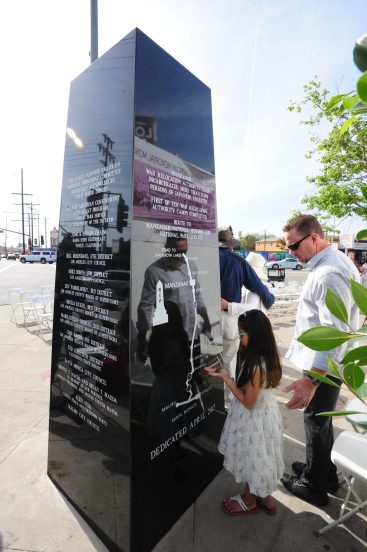 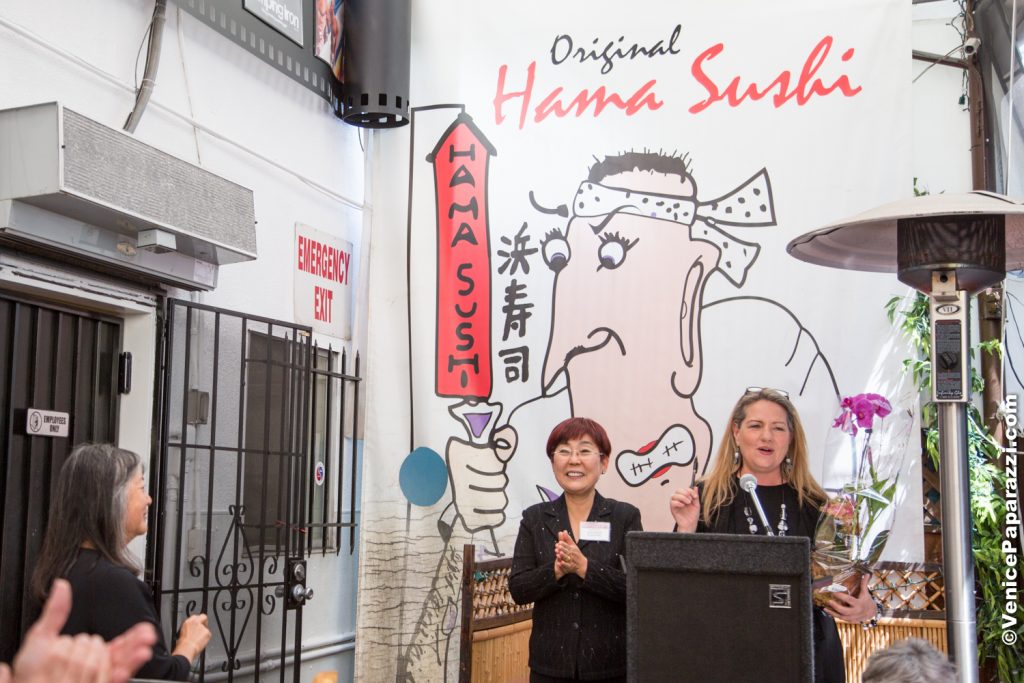 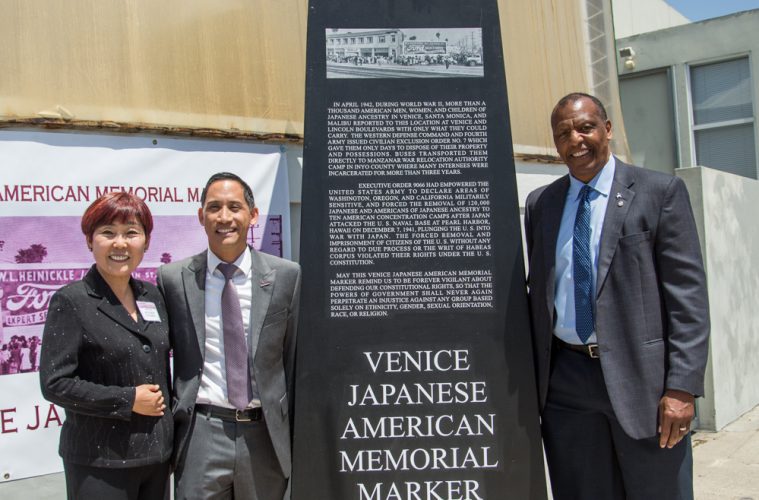 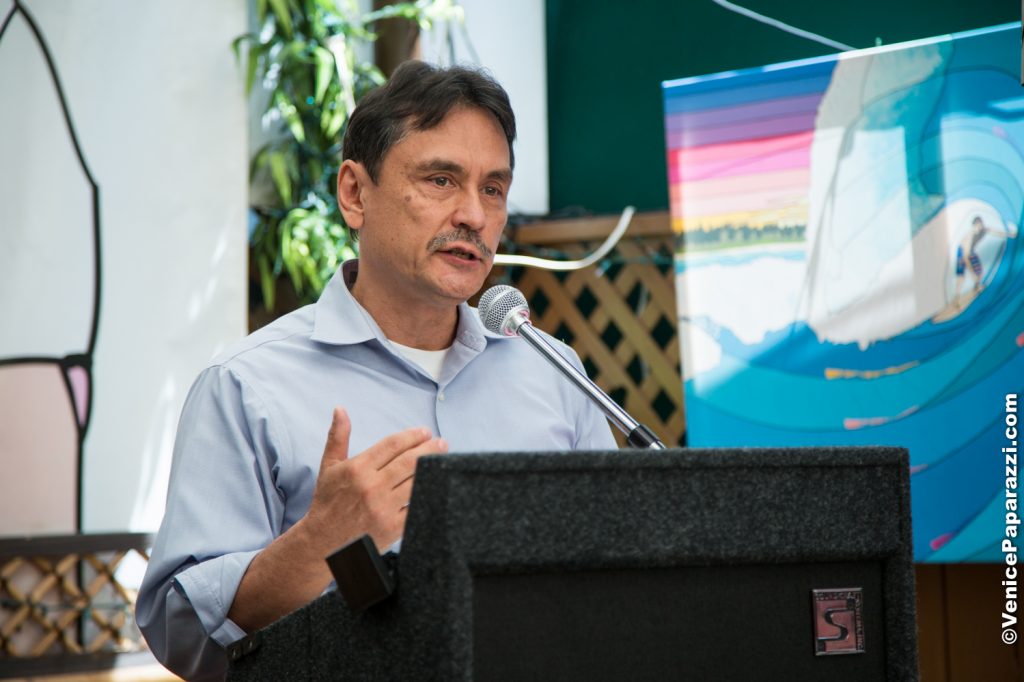 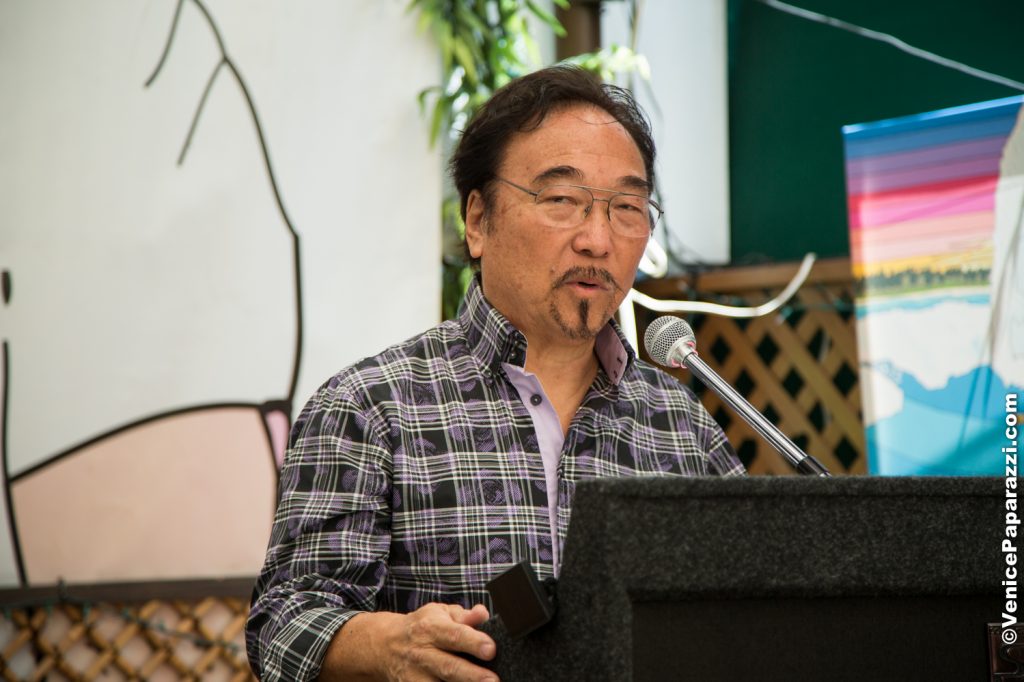 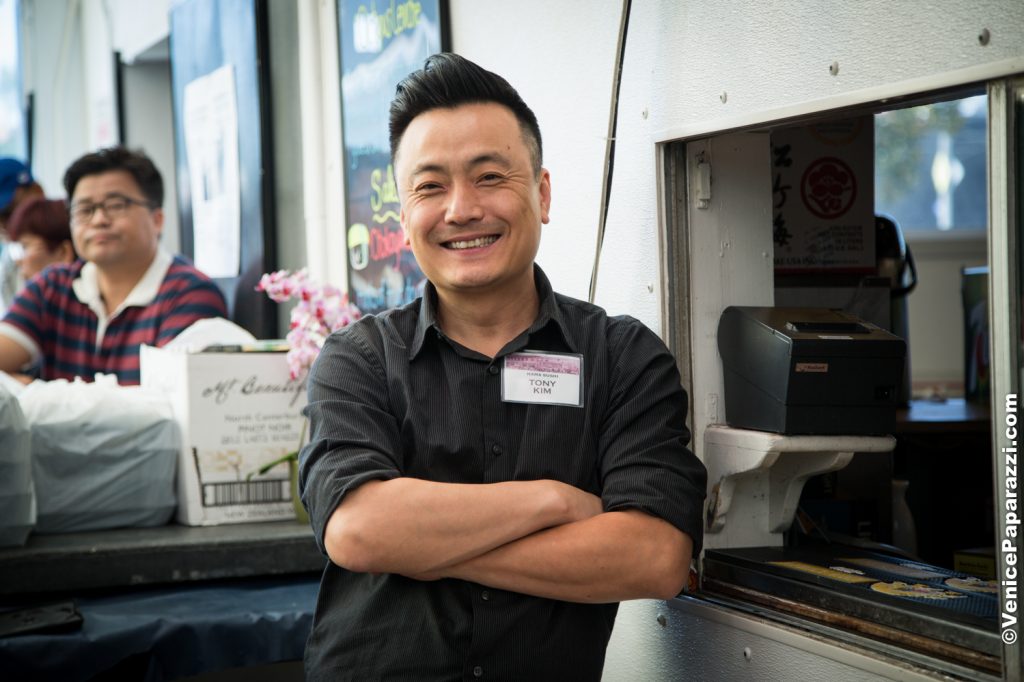 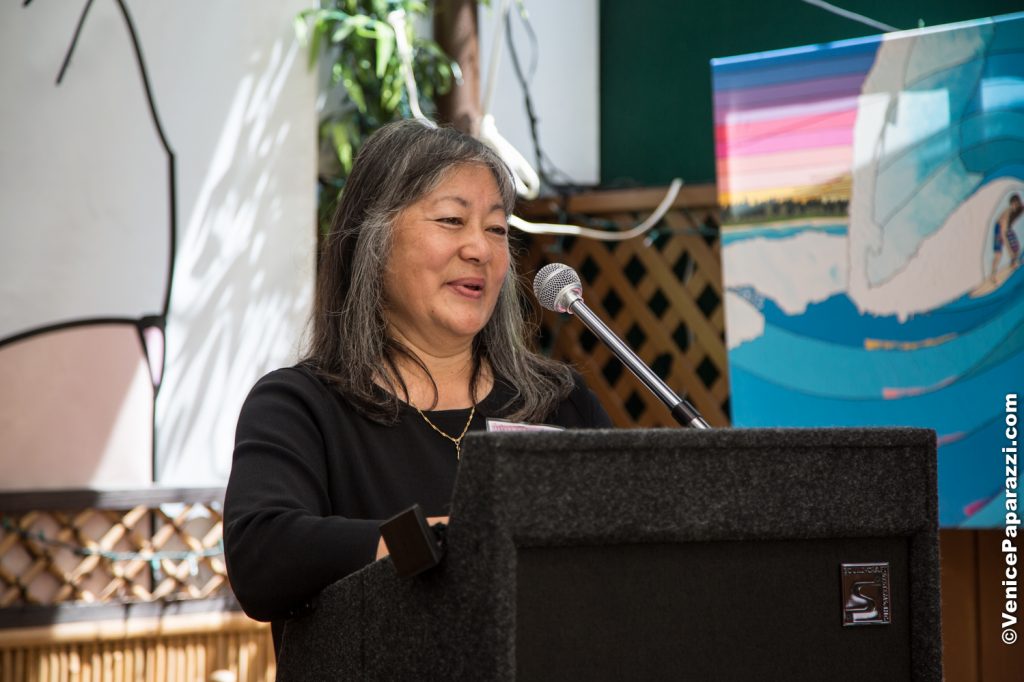 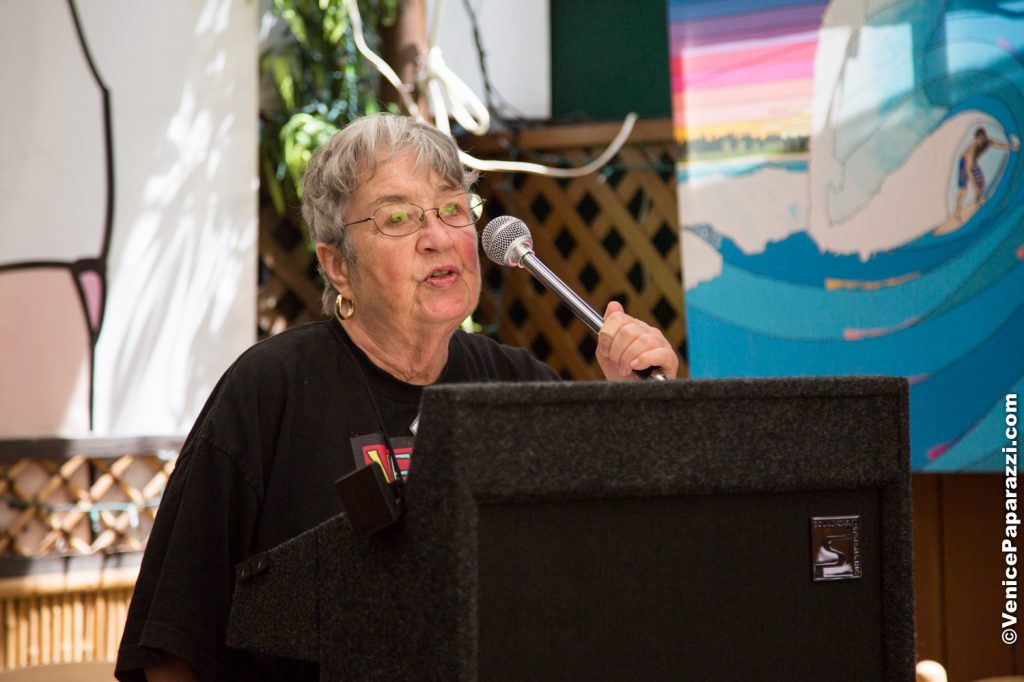 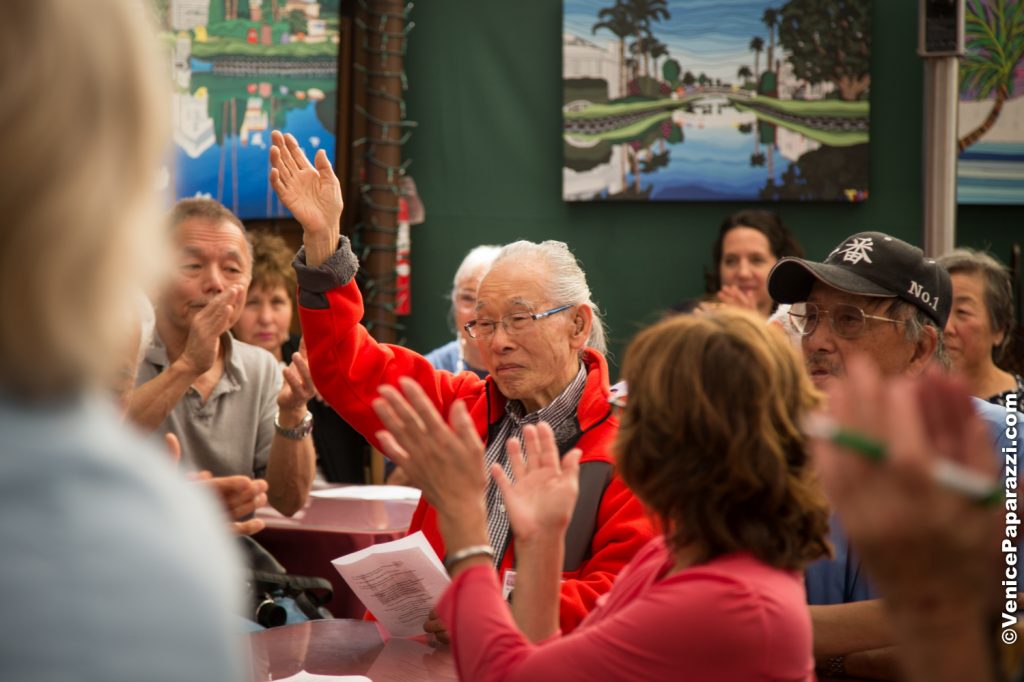 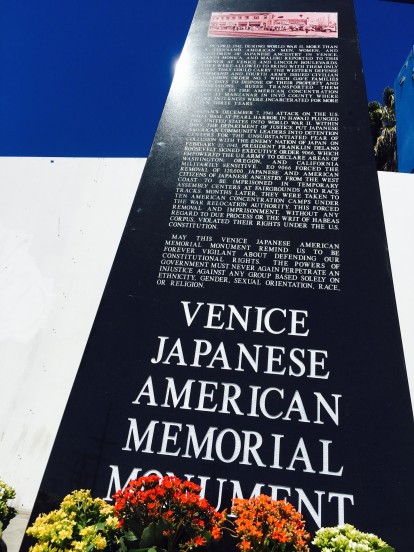 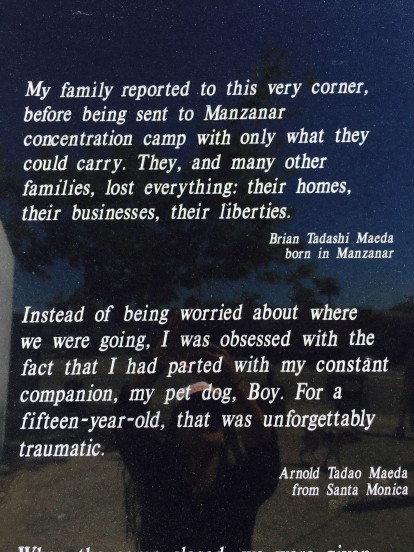