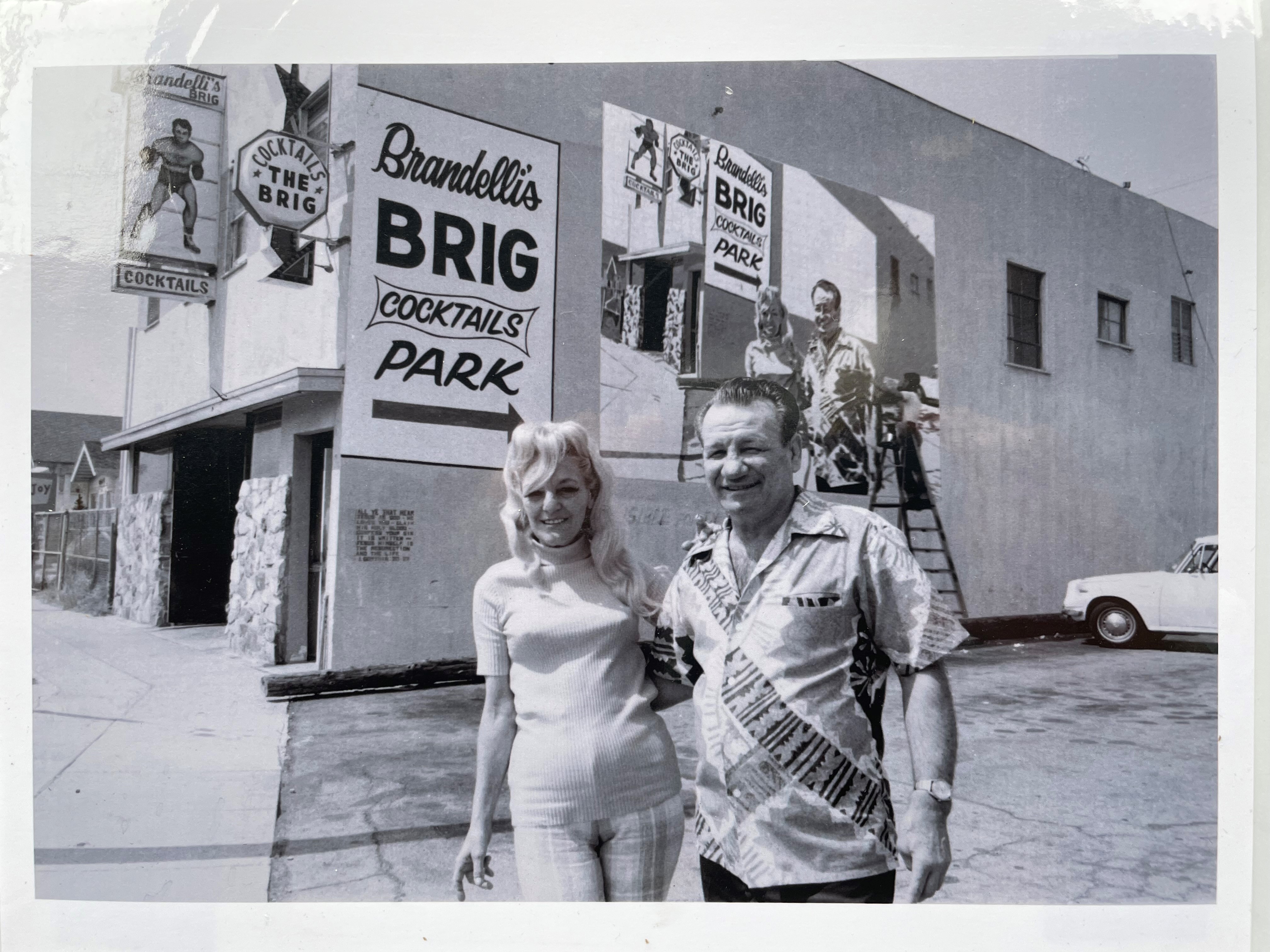 The mural on the side of the legendary Venice watering hole, The Brig, is getting restored!

The historic mural on The Brig building at 1515 Abbot Kinney Blvd. is being restored by the original muralist, Art Mortimer.   Restoration began September 7, 2021 and is expected to take 6 or 7 weeks for completion in late October.   Venice is now well-known for its murals, but this one may be one of the first when in 1973 it was part of a County of Los Angeles project to encourage art in public places.  The County persuaded Venice property owners Babe and Betty Brandelli to allow Mortimer to paint the side of their building.  When Mortimer met The Brandellis he knew they needed to be the subject of the mural.   Babe was a Venice boxing champion and a neighborhood hero and celebrity.   When he retired in 1952, he bought this property on what was then W. Washington Blvd. where several boxing gyms were located.  Babe renamed the beer hall on the 1st floor “Babe Brandelli’s the Brig” and converted the 2nd floor taxi-dance hall into his apartment.    Mortimer’s mural depicts the Brandellis in the parking lot in front of the building and added himself on a ladder in the background painting the mural, resulting in a picture in a picture.   Mortimer has since painted many murals throughout the Southland including local murals in downtown Santa Monica, Canter’s Deli, and Helms Bakery, per his Bio.

In 1997 Brandelli’s descendants sold the property to David Paris and Nancy Cowen who live in Venice and converted the second floor apartments into their professional offices.    Paris/Cowen engaged Mortimer to restore the Mural in 2001 and now again twenty years later.   In 2013 the mural was designated a Vintage Original Art Mural by the City of Los Angeles Department of Cultural Affairs (VAM #A018)

The Brig bar is leased to local nightclub and restaurant owners David and Patti Reiss of Reissco  whose 1999 remodel of The Brig was featured in Interior Design magazine.   Abbot Kinney Blvd. has since become a shopping and restaurant destination.    Closed during the pandemic, The Brig re-opened in June 2021 after an extensive remodel assisted by partner/restaurateur Jared Meisler that earned a #1 ranking in Eater’s 12 Hottest Cocktail Spots in Los Angeles, June 2021.   Amid the updated design there is still a place for framed pictures of Babe Brandelli and the original street sign featuring a caricature of Babe in a boxing pose.  The parking lot is now a popular outdoor dining patio covered with shade sails and string lights.   Since September 7th patrons on the outdoor patio can watch Mortimer atop the scaffolding hand-painting the new mural to exactly match the original content and colors.   Some Venetians were alarmed to see a blank white wall replacing the old mural.   Fear not, this is part of the artist’s process after removing the old layers of peeling paint discolored by years of exhaust fumes from the food trucks that parked at The Brig.  In pre-pandemic times The Brig lot was the epicenter of Abbot Kinney’s First Friday food-truck event (returning in October: check here to confirm)   The 2008 advent of Roy Choi’s Kogi BBQ truck at The Brig is considered the advent of the modern gourmet food truck movement, as depicted in Jon Favreau’s 2014 feature film Chef filmed in part on The Brig lot. 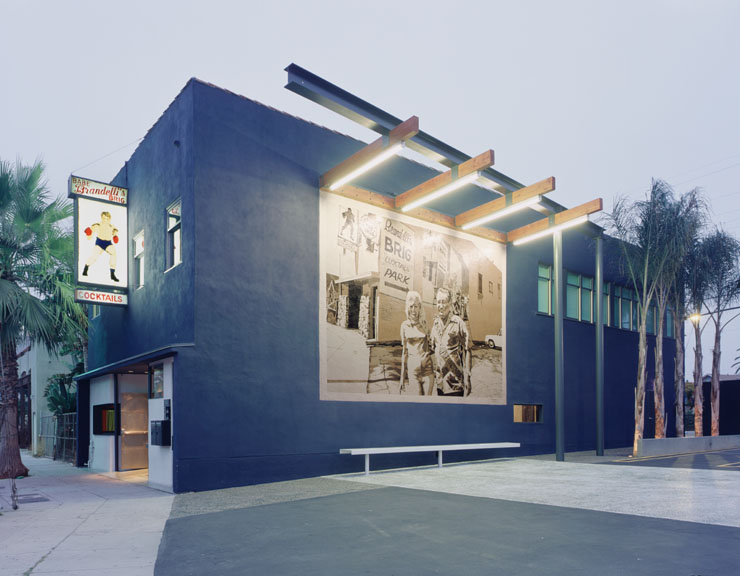 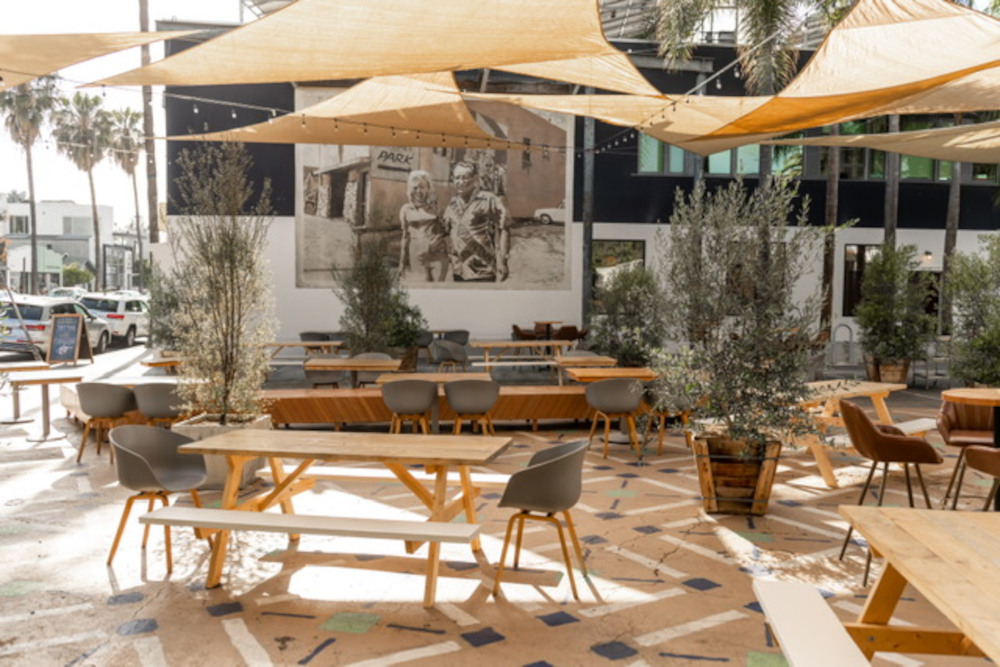 2021 The Brig patio with mural. Photo by Rob Stark