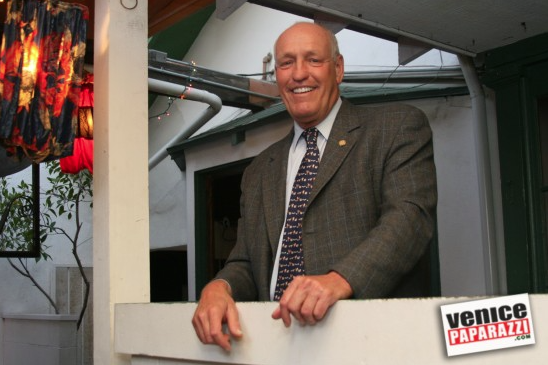 Beloved Former LA City Councilmember Passes Away After Four Year Battle With Cancer. A celebration of life and memorial is set for April 15, 2016!

LOS ANGELES – Two celebrations of the life of former Los Angeles City Councilmember Bill Rosendahl will be held on the Westside in the coming weeks, Rosendahl’s successor on the City Council Mike Bonin announced today.
.
A formal Catholic Mass will be held at St. Monica’s Church in Santa Monica on April 5, and a lively, Rosendahl-style community “Celebration of Life” will be held on April 16 at Mar Vista Park. Members of the public are welcome to attend either or both events. Please find details in flyer below.
. 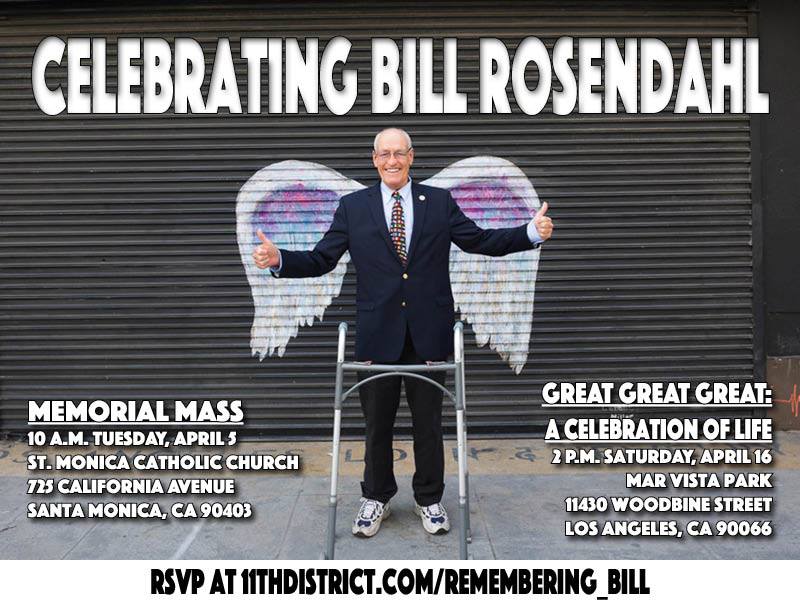 ..
Members of the public an RSVP for either, or both, events at www.11thdistrict.com/remembering_bill. People can also read Rosendahl’s obituary, see a tribute video, and find out more about the three organizations donations can be made to in lieu of flowers on the page.

Widely known for his beaming smile and a booming voice, Rosendahl befriended both the powerful and the downtrodden throughout his lifetime and during his eight year stint representing the Westside on the City Council.

Often called the “Conscience of the City Council,” Rosendahl focused on seeking solutions to the problem of homelessness, promoting mass transit, curbing overdevelopment, and giving neighborhoods a greater voice in city decision-making. He was the first openly gay man elected to the Los Angeles City Council, and served from 2005 to 2013, when he retired to battle a stage four cancer that was diagnosed in the summer of 2012. Toward the end of his tenure in office, he became an outspoken advocate for medical marijuana, which he used to combat the side effects of cancer treatments.

Rosendahl was an atypical politician. He embraced his fiercest critics, championed the hot-button issues that many avoided, and almost always spoke extemporaneously, giving long speeches that routinely skewered sacred cows and even his fellow politicians. He rewarded constituents and cajoled fellow elected officials with fresh eggs from the dozens of chickens he raised at his Mar Vista home. Gifted with a boundless sense of optimism, Rosendahl imagined a politics of endless possibility, and was known by his signature exclamation: “Great! Great! Great! Great! Great!” While Rosendahl represented some of the city’s most affluent neighborhoods, his proudest accomplishments involved helping the marginalized, the outsider, and the underdog.  He boasted of: approving permanent supportive housing; creating a program that housed more than 100 people living in their vehicles in Venice; opening Fisher House, a home for families of veterans receiving treatment at the Veterans Administration campus in West LA; halting expansion of Los Angeles International Airport into nearby neighborhoods; and approving a citywide Bicycle Master Plan. He was perhaps most proud of securing the reburial of the remains of more than 1300 Gabrielino Tongva Native Americans discovered during the construction of Playa Vista.

Prior to his election, Rosendahl was the award-winning producer and moderator of critically acclaimed public affairs television shows. As host of Local Talk, Week in Review and Beyond the Beltway, Rosendahl created a needed forum for the discussion of public affairs. An advocate of empowering people through information, Rosendahl produced more than 3,000 programs during his 16 years working in journalism, opening the airwaves to all viewpoints and steering thoughtful dialogue on the most complex and controversial issues affecting people’s lives.  He was well-known for his cheerful sign-off to each of his programs – “God Bless and bye-bye!”

The sixth of eight children born to German immigrant parents in Englewood, New Jersey, Rosendahl yearned to travel the planet. He led a life that took him around the world, shaping events through the force of his will, the size of his heart, and the warmth of his hugs.

Rosendahl was immensely proud of his international travel, and regaled friends and acquaintances with tales of traveling around the planet, including through Africa, where he walked the length of the continent, often sleeping under the stars. He also cherished his frequent visits to gay resorts in Acapulco, Mexico and on the Russian River in Northern California. He made new friends wherever he went, regularly handing out cash or opening his home without second thought to anyone in need.

Rosendahl had a giant heart and tremendous spirit.  Raised Catholic, he became fiercely ecumenical, embracing and incorporating elements of multiple faiths into a personal belief system that celebrated all people and saw God in all things.  Each morning, he would soak in his view of the Pacific Ocean, touch a fragment of redwood tree, and pray to a pantheon of friends and family members who had passed but whose memories and spirits gave him strength.

In 1968, Rosendahl worked for the presidential campaigns of Eugene McCarthy and Robert F. Kennedy. In 1972, he worked as a fundraiser for George McGovern, traveling around the country with the Democratic Party nominee. In between presidential campaigns, Rosendahl served in the U.S. Army from 1969 to 1971, spending a year as a psychiatric social worker, counseling troops returning from combat. As special assistant to the commanding general at Ft. Carson, Colorado, he won national recognition for reorganizing the base and boosting morale of the service people. He later served as a White House appointee to the State Department as Chief of Operations for the U.S. Trade and Development Program, and worked as an associate in philanthropic work for John D. Rockefeller, III.

Rosendahl came out publicly as gay in 1995, when his longtime partner, Christopher Lee Blauman, died as a result of AIDS complications. Decades later, he would mourn lost friends and would angrily rail about the ways the Reagan and Clinton administrations betrayed the gay community. In his later years, he relished his role as a gay role model. In 2008, he received the Man of the Year Award from Christopher Street West. In 2013, he received the Morris Kite Lifetime Achievement Award from Christopher Street West, and in 2015 he was honored with a Lifetime Achievement from the Stonewall Young Democrats.

Rosendahl earned a Master of Social Work (MSW) from the University of Pittsburgh, and a Bachelor of Arts in Political Science & Economics from Saint Vincent College in Latrobe, Pennsylvania.

He is survived by his longtime partner, Hedi El-Kholti; his brother Thomas Rosendahl and sister-in-law Sheila Rosendahl, and their sons, Robbie-Paul, Ricky-Luke and Arthur of Westchester; his brother Steven Rosendahl of Highlands Ranch, Colorado; his sister Mary LeMothe of Apex, North Carolina; his sister Helen Davoren of Westfield, New Jersey; and his nephew and caregiver, Christopher Rosendahl of Mar Vista.

Funeral and memorial arrangements are pending, but will include a Mass of Christian Burial at St. Monica’s Church in Santa Monica, and a lovely and colorful memorial service and celebration of life at Mar Vista Park.

In lieu of flowers, donations in his memory can be made to any of his favorite organizations helping the homeless; Safe Place for Youth; New Directions for Veterans; and the Jeff Griffith Youth Center at the Los Angeles Gay & Lesbian Center.

View photos that we found of Bill Rosendahl in our Venice Paparazzi archives.

A message from Team Venice Paparazzi!  3/31/16.  “RIP Bill, we love you, and you were a fantastic L.A. City Councilman!  View photos that we found of Bill Rosendahl in our Venice Paparazzi archives.” 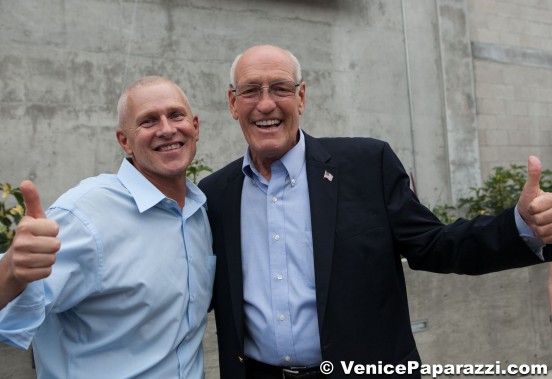 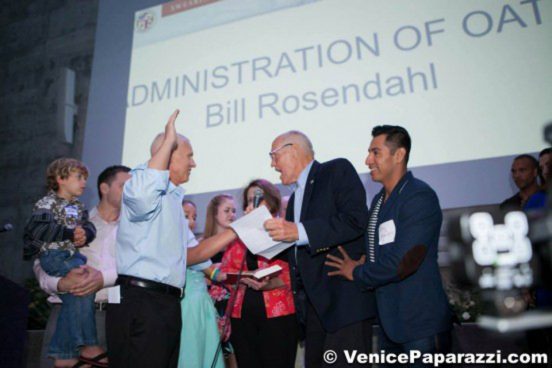 Bill swearing in Mike at the 11th  ceremonial swearing-in at Google’s Los Angeles Headquarters in Venice on July 13, 2013 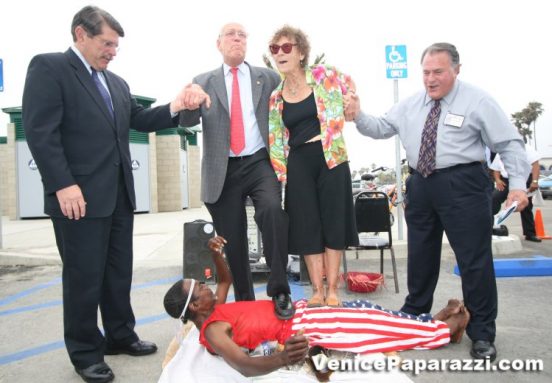 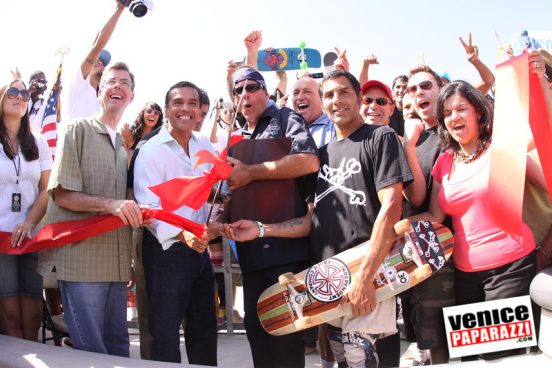 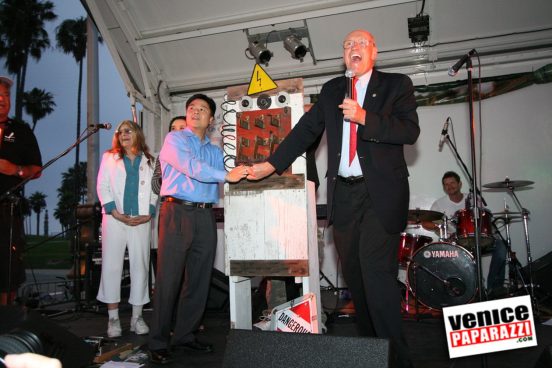 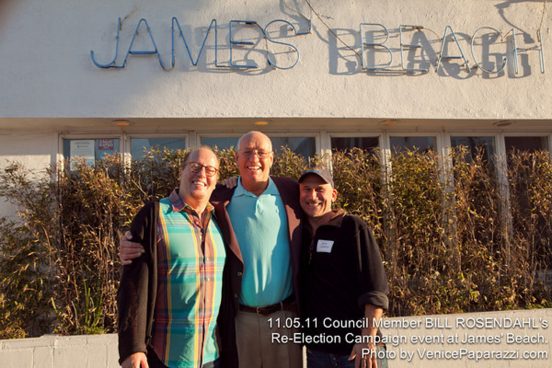 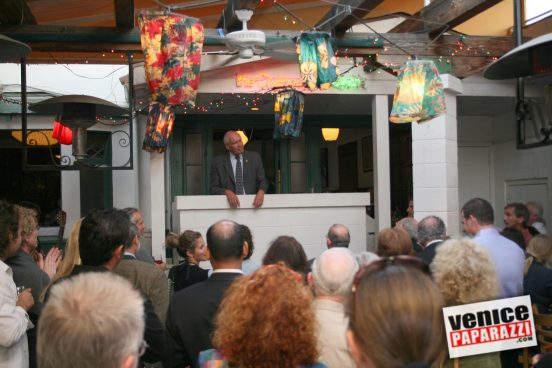 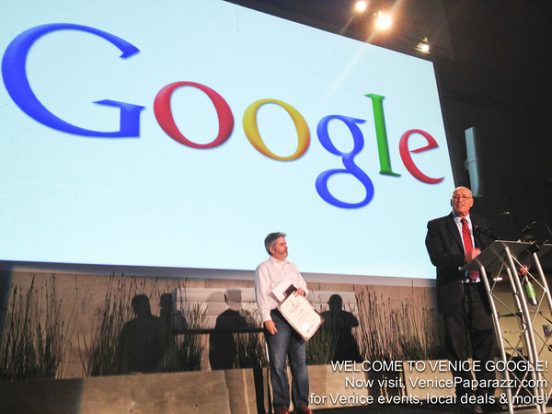 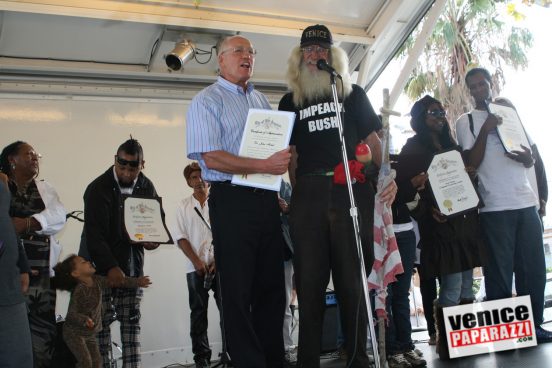 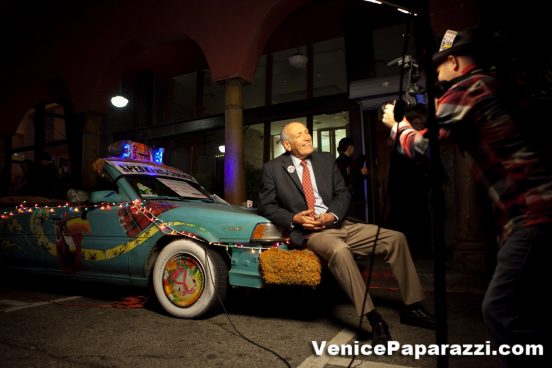 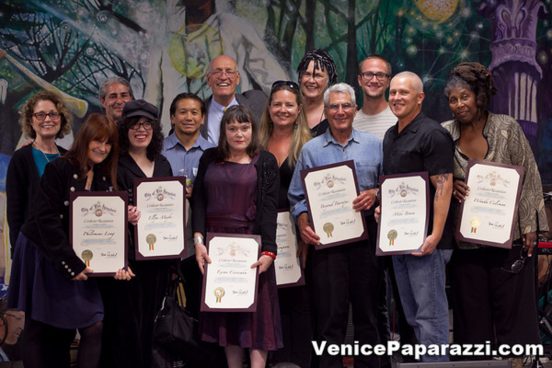 Bill Rosendahl at the  Venice Beach Poets Monument Benefit on May 31, 2012 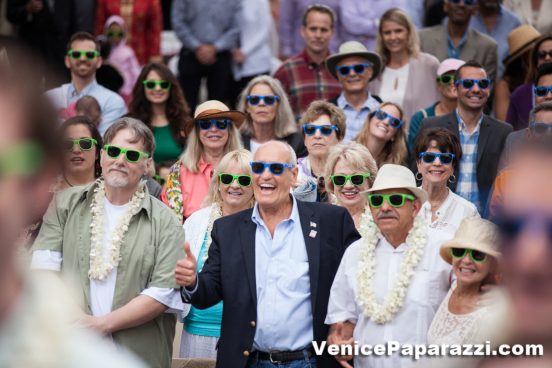 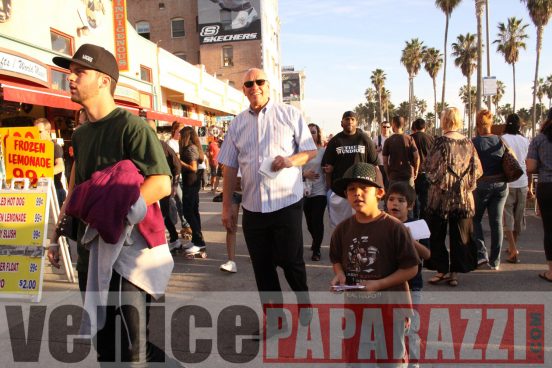 Bill sported on the Venice Boardwalk 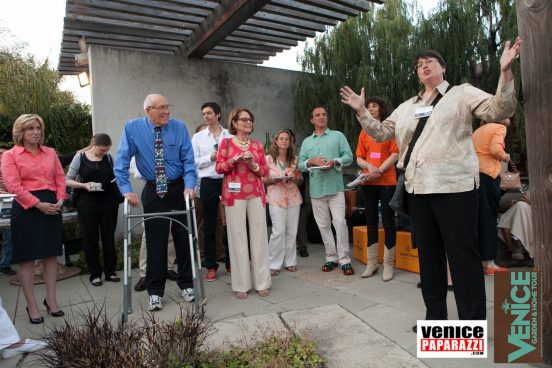 Bill at the Venice Home and Garden Tour in 2013 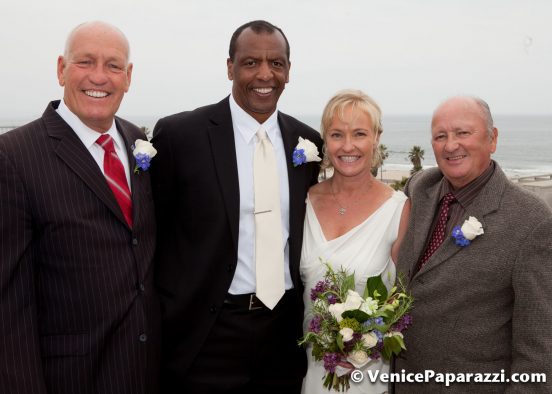 Bill at Mark Antonio and Eileen’s wedding reception at Hotel Erwin on May 7, 2011. 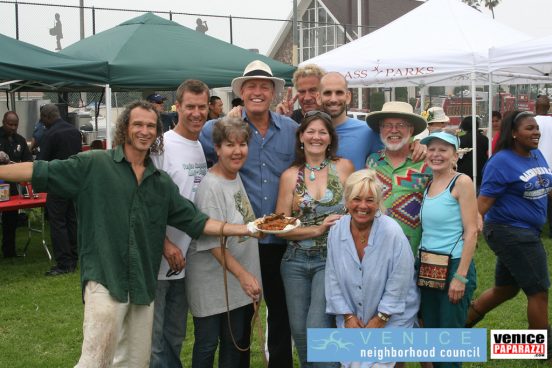 Bill at the Venice Neighborhood Council BBQ on July.16, 2011 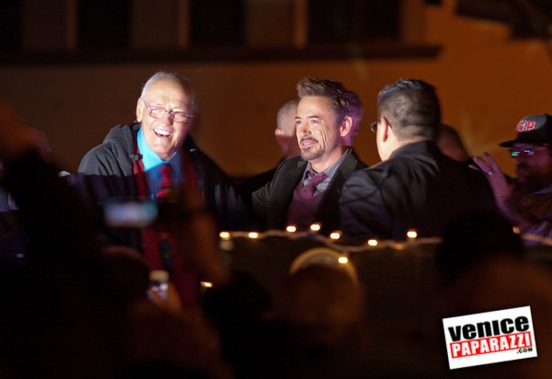 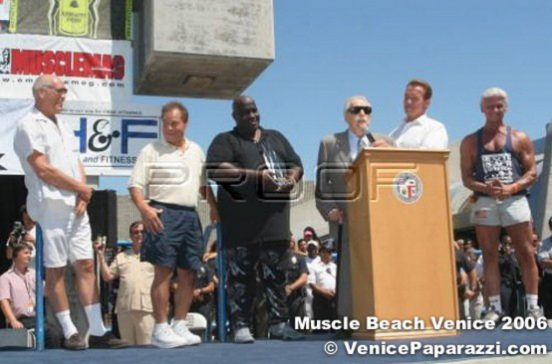 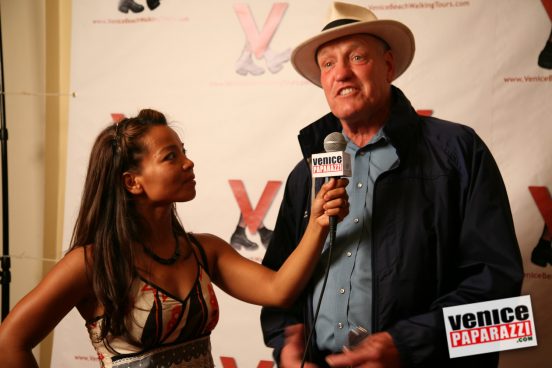 Venice Paparazzi’s Edizen and Bill at Venice Beach Walking Tours’ launch party on June 28, 2009.  To Bill, Your infectious positive energy, and embracing of Venice Paparazzi is endeared in our hearts forever!  We love you!  Thank you! 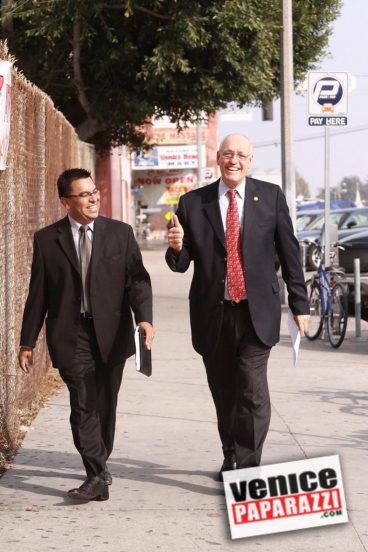 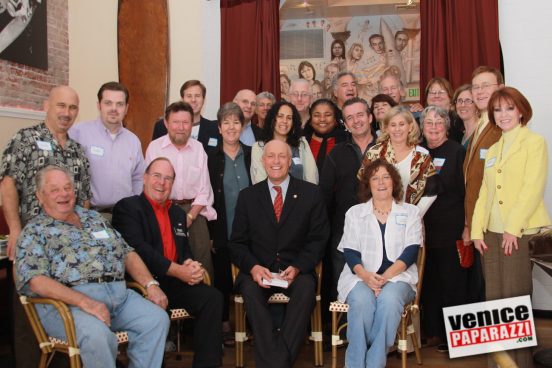 Bill at the Venice Chamber of Commerce’s Members Only Luncheon at Danny’s on Dec. 4, 2008. 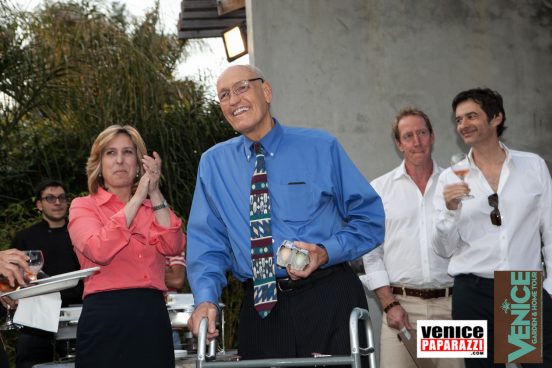 View slideshow below, or click here to view all 100+ photos of Bill Rosendahl.